What's New
Through the conflict, life carries on in Ukraine
A FOCUS on Mission
Must Patience Be So Slow?
Harold Jantz: A Heart for the Mennonite Story
Lorlie Barkman: A Life of Creative Engagement
Last Days, First Days
Women in Ministry: Bertha Dyck
January Moment in Prayer “Holy Spirit—Fill Us!”
The Church as the Patient Body of Christ
Advent: Making Much of Jesus: Christmas Day
Home News CMU celebrates grand opening of Marpeck Commons 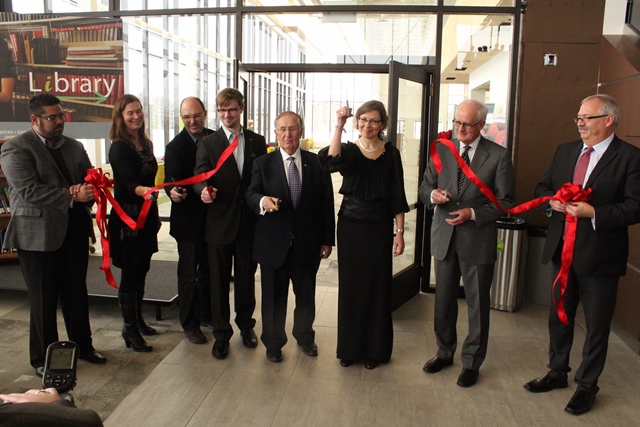 “With honour and joy, we say thanks,” says president Cheryl Pauls

More than 300 faculty, staff, students, alumni, and friends filled the building for its Grand Opening and Dedication ceremony, held Nov. 29, 2014.

“Today, we celebrate the possibilities for the university and far beyond,” said vice president external Terry Schellenberg.

Plans for a new library, with a bridge that would connect the north and south sides of CMU’s campus, began to take shape more than 15 years ago. Construction began in July 2013.

President Cheryl Pauls reflected that a common question she faced during the building process was: Do universities still need libraries?

“The greater the stores of knowledge available at the push of a thumb, the greater the yearning for experientially-based connections amongst people enabling sound research, shared understanding, deep friendship, and trustworthy community,” Pauls said.

President Emeritus Gerald Gerbrandt, who led CMU from its inception in 2000 until 2012, recalled the meeting in 1998 where the idea of a new library and bridge first took shape.

“(The bridge) represents a larger vision, symbolizing CMU’s commitment to building bridges that overcome all kinds of divisions—not only between the two founding denominations (Mennonite Brethren and Mennonite Church), but among us, as well as between us and others,” Gerbrandt said.

Jerald Peters, Principal Architect at ft3, said that designing Marpeck Commons presented a challenge that he and his colleagues were eager to take on.

“It’s a challenge to design a building that has so many opportunities,” Peters said, adding that those opportunities included unifying a divided campus and welcoming friends and neighbours to CMU, all while being sustainable and creating a building that is “transparent and yet (has) a presence.”

More than 700 donors contributed to the CONNECT fundraising campaign, which was established to make the new building a reality. Under the guidance of Campaign Chair Elmer Hildebrand, CEO of Golden West Broadcasting, the campaign has raised more than $13 million toward its $14.4 million goal.

Hildebrand said it has been a pleasure to work with a dedicated fundraising cabinet, and that the team is committed to working together until the campaign reaches its goal.

“We value the support from such a diverse community,” Hildebrand said. “Each gift is important and speaks to the past, present, and hope of the future.”

He added that the building is named after Pilgram Marpeck, a civil magistrate from the early 1500s whose Anabaptist convictions guided his life and work.

“In the turmoil of 16th century, he called for love and tolerance, and perhaps he has something to say to us today,” Hildebrand said.

Speaking on behalf of the student body, CMU Student Council President Josh Hollins noted that CMU has had an enormous impact on the way he interacts with people, thinks about the world, and sees himself as a Christian.

“What takes classroom learning to a whole new level is the conversations that I have with my peers, staff, and faculty over a cup of coffee, and the sharing of personal experiences,” Hollins said, adding that Marpeck Commons creates potential for more of such interactions.

“More broadly, I believe that it will help to foster the enriching community that we experience through coming to such a unique post-secondary institution here in Winnipeg,” Hollins said.

Marpeck Commons also houses CommonWord, a book and resource centre created in partnership with Mennonite Church Canada that will allow students and the public to buy, borrow, and download a wide range of resources, as well as a coffee and snack bar called Folio Café.

The Commons will be fully functioning by Jan. 6, 2015, the first day of CMU’s winter term.

The Marpeck Commons grounds include 100 new trees, a naturalized pond, a low fence and gentle pathways that will welcome community members in.

Pauls invited the community to engage in programs, get to know students and faculty, come for coffee and gelato, come to events, draw on resources, and spend time in Marpeck Commons.

“I invite people… to continue to pray and invest, and cherish the stories told through a university rooted in the Anabaptist faith tradition, moved and transformed by the life and teachings of Jesus Christ, ever inspiring and equipping women and men for lives of reconciliation and service in church and society,” Pauls said.

“With honour and joy, we say thanks.”