What's New
Through the conflict, life carries on in Ukraine
A FOCUS on Mission
Must Patience Be So Slow?
Harold Jantz: A Heart for the Mennonite Story
Lorlie Barkman: A Life of Creative Engagement
Last Days, First Days
Women in Ministry: Bertha Dyck
January Moment in Prayer “Holy Spirit—Fill Us!”
The Church as the Patient Body of Christ
Advent: Making Much of Jesus: Christmas Day
Home News A clear picture of mission 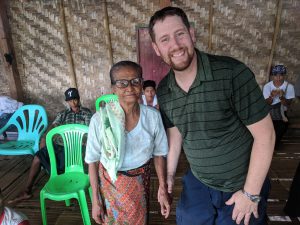 Greg Wiens and a woman in Myanmar whose vision was helped by Global Vision 2020 eyeglasses. Photo courtesy Greg Wiens

How could a brief article in the National Geographic result in a Saskatchewan Mennonite Brethren pastor making a speech to a crowd in New York’s Madison Square Gardens that would help a charity win a $1 million award, you ask?

The long answer is a story.

An idea that should have taken off 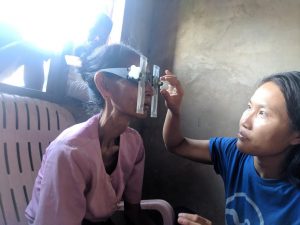 Eight and a half years ago, Wiens saw a one-page article in the National Geographic about a new method to deliver eyeglasses in the developing world. He was impressed.

After reading the article, Wiens had a dream. And the next night. A third night, he again had the same dream. In it, he was ten years into the future, reading the National Geographic: “Ten ideas that never took off and why they should have.” The first reason? Nobody ever promoted it. It failed for lack of support.

“Without making it sound too dramatic,” says Wiens, there have been three occasions when he believes God was speaking to him directly, and this was one of them.

He reached out to the inventor, Oxford University physicist Joshua Silver who had devised a way of using a liquid gel to change the refractive strength of the lenses. Silver told Wiens how to get in touch with an American marine, Major Kevin White, who was distributing the eyeglasses in Africa and Eastern Europe. Within minutes of emailing the major, he got a reply. 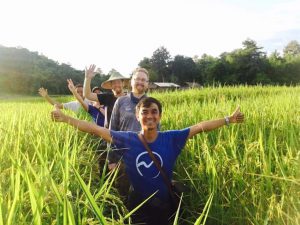 Last year, Wiens volunteered to join an MB Mission visit to rural Myanmar where he would help distribute glasses from Global Vision 2020, the NGO Kevin White has built. The eyeglasses kit Wiens brought to Myanmar supplied some 250 reading glasses and more than 150 glasses for distance vision.

To get to Myanmar, Wiens sold his motorcycle. He says he did not regret giving it up for the opportunity to become part of the mission venture and dispense the glasses. (However, when some members of his church learned about what he had done, they bought the bike back for him.) The experiences in Myanmar were rewarding.

The beauty of the distribution is that the glasses cost just $2 apiece, frame and lenses included, and the testing for the glasses is so simple that it can be done in minutes by a layperson such as Wiens. Indeed, says Wiens, local pastors and lay leaders from MB Mission were soon doing a better job of dispensing the glasses than he. They could explain to the recipients what they were was doing as they dispensed the glasses from the mission compound, while stopped for lunch, or during a break at an elementary school.

In some places, the tangible help the glasses offer broke through hostility town leaders had toward church leaders, says Wiens.

“We literally heard old women saying, ‘I thought I was blind, but it turns out I just needed glasses.’” Wiens says.

Though much of his life has been within the military, White’s personal orientation has been toward peacekeeping. His last appointment during a 20-year career was as an international analyst with the Defense Threat Reduction Agency. Earlier he had been involved in developing peacekeeping support operations within the Joint Task Force of the European Command under whom he also pioneered the use of adjustable eyeglasses as a humanitarian assistance program manager.

After leaving the military in 2009, White continued to devote his energies to developing eyeglasses for populations who find it difficult to afford them. Already trained in science, White undertook MBA studies at Johns Hopkins University. He worked at refining what could be done to make the eyeglasses both attractive and accessible to the nearly 2.5 billion people for whom poor vision affects productivity, safety, and quality of life.

A springboard for ideas that connect

That goal attracted Wiens and when National Geographic invited nominations for its Chasing Genius awards in 2017, so he nominated White and his USee program. It won in the medical category, one of four awards given, worth $25,000 (US).

Soon thereafter, Wiens and others nominated White and Global Vision 2020 for the awards given out by WeWork.

That’s what led to the invitation to Greg and his wife Heather to fly to New York at WeWork’s expense, to make the speech that might give Global Vision a chance at a $1 million award.

An explanation about WeWork’s origin and vision. It was founded by an observant Israeli Jew, Adam Neumann, together with Miguel McKelvey, eight years ago. Its founding principle is simple – and reminiscent of Wiens’ recurring dream: many startups would be helped if they could locate in a workspace where they had access to people and conveniences. Today, WeWork leases out such spaces affordably in the world’s biggest cities in 18 countries to 150,000 members. In its short history, WeWork has gained a valuation of $20 billion.

Neumann talks a lot about innovation clusters and community. Lostness is what ails us, Neumann argues, and his hope is that he can help to re-establish some of that lost community, he told a reporter for Axios. Rewarding innovators who bring genuine good to others – like a retired colonel supplying low-priced eyeglasses – fits that description. 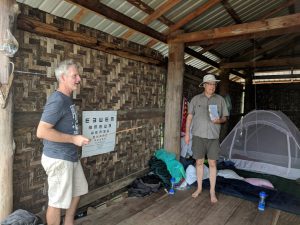 In New York, Wiens worked with a coach to pare down his 800-word script to a speech that could be given in two minutes: relating his experience with the eyeglasses in Myanmar to a large crowd in Madison Square Gardens. The speech prepared the setting for Kevin White to answer more questions on stage. (Wiens’s work with the coach will have benefits in the pulpit too.)

After all the presenters had spoken, the judges came back deadlocked. After additional deliberation, they reported that two $1 million awards would be given to Re:3D for their innovative, industrial-sized 3D printers and Global Vision 2020’s affordable eyeglasses.

When Greg Wiens spoke to his congregation on the following Sunday, Jan. 21, he found it hard to keep his feet on the ground.

Who could have imagined a short eight years ago that the God’s nudging to reach out to a stranger would have led to this?

[Harold Jantz is former editor of the MB Herald, founder of Christian Week, and a member of River East Church, Winnipeg.

You can purchase glasses from Major White at http://www.gv2020.org
A kit with the adjuster, eye charts, 250 distance and 250 reading glasses are approximately $1300 Canadian.
Extra glasses are $2.50 a pair

Good day…this is a beautiful story, thankyou for sharing. I like it for many reasons, but I think mostly because I see creative social entrepreneurship (perhaps an example of blending one’s spiritual gifts?) in the name of Christ that brings greater health and dignity to those affected by poverty. Hope to see you soon Greg!