What's New
6 reasons to attend the MWC Global Assembly...
One too many
Just one more
A safe place in Winnipleg
When the sent are sent away
Leading through the trauma of covid: part one...
Church of Lithuania supports Ukraine Christians
A mennonite heart for refugees
A great time for building relationships
Multiply announces new General Director
Home News Church planter retreat sparks national apology 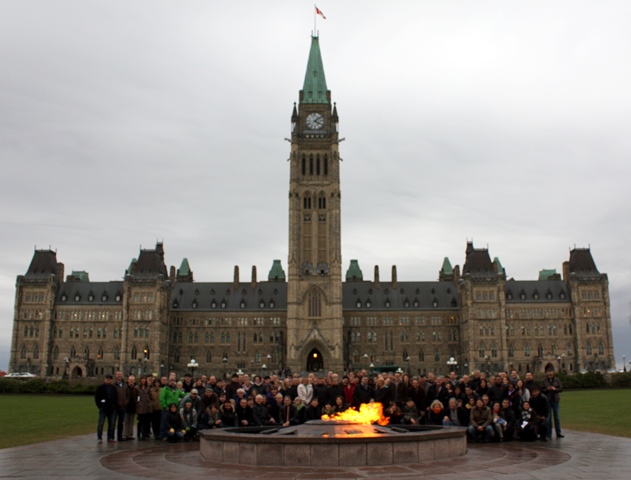 More than 200 church planters and spouses gathered on Parliament Hill in front of the Centennial Flame to pray for Canada.

Some 220 church planters and their spouses, along with 20 denominational leaders, met in Ottawa, Nov. 4–7, for C2C Network’s annual church planter retreat. With keynote addresses by Jeff Vanderstelt, Bruxy Cavey, and Alan Hirsch, and a prayer walk around Parliament Hill led by International House of Prayer, planters left the event with renewed energy and vision.

On Wednesday night, the group heard from Chief Kenny Blacksmith from the Cree Nation of Mistissini in Quebec, founder and executive director of Gathering Nations International. Blacksmith spoke about the history of Canada’s First Nation Peoples, and talked about his ministry of healing and restoration from the past. “Because of the transformation we can have in [Christ], we can truthfully and justifiably release forgiveness.”

Blacksmith prayed for the group: “I thank you, Father, for what you are about to do through your sons and daughters who will rise this day and become change agents – who will become the anchor to the instability in this nation, the shalom that is much needed. May we begin to see Canada as you see it, to embrace all the peoples of our nation.”

Canadian conference executive director Willy Reimer offered a response on behalf of all Canadian Mennonite Brethren, noting how he grew up with a judgmental spirit toward certain ethnic groups. “Because someone looked a certain way, we assumed certain things about them.”

“As a denomination, I want to ask for your forgiveness for how we’ve treated First Nation Peoples across the county – for our attitudes and actions,” said Reimer.

“My commitment is for Mennonite Brethren to take [your challenge toward healing] very seriously – to step into it, not just to wait for it to happen, but to actively pursue the hand of God in reconciliation, in redemption, in church planting, and in ministry.

Chief Blacksmith’s prayer for the church in Canada