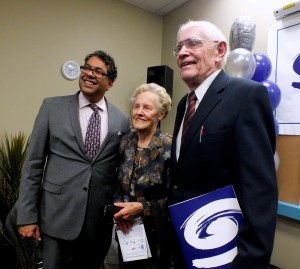 It was 1926, in the Mennonite settlement of Orenburg. Jacob Bergen gathered his children and their families on a refugee exodus that led them to Canada; his daughter Katherina with her husband David Enns established their new life in Rosemary, Alta. There were many parallel stories at the time – some families were able to find refuge, some were not.

In the years since that exodus, many of those who secured a new future in Canada have been active in “paying it forward” through support to other newcomers – immigrants and refugees.

In 1979, people displaced by the war in Vietnam and neighbouring countries started to flow to Canada in significant numbers. Mennonite Central Committee was the first national denominational body to sign an agreement with the federal government to allow congregations to sponsor refugees – not relatives or fellow-believers, simply people in need of protection and a chance for a new life.

With the support of MCC Alberta, the Mennonite congregations in Edmonton founded the Edmonton Mennonite Centre for Newcomers, now one of the larger immigrant-serving organizations in Alberta.

In the late 1980s, wars in Central America were pumping flows of refugees north; increased numbers of refugees were coming overland to Calgary to claim protection. Again, MCC Alberta with the local churches responded, establishing CMCN – a Calgary counterpart to the Edmonton agency.

The Centre for Newcomers has grown, and on Oct. 8 celebrated 25 years of serving immigrants and refugees. The Centre is also one of Alberta’s larger immigrant-serving agencies: with a staff of about 120, the Calgary Centre serves close to 9,000 clients each year through a full suite of settlement, English language, and employment programs.

Fred Enns, the infant son of Katherina and David Enns when his grandfather Jacob Bergen led the family out of Russia, and his sister Laura Dyck, who was born after their arrival in Canada, were invited at the Centre for Newcomers’ 25th anniversary celebration to share the story of Mennonite migrations, and motivation, with more than 200 guests, including Alberta human services minister Dave Hancock and Calgary mayor Naheed Nenshi. They addressed the question, “Why are Mennonites so involved in immigrant and refugee support?”

Laura (refugee support coordinator for MCC Alberta in 1988 and a founding member of the CMCN board of directors) shared the historical, theological, and biblical motivation of Mennonites to reach out to refugees and other strangers, and recounted the experiences of families – from Vietnam, El Salvador, Ethiopia, Yugoslavia – who found stability and a peaceful life in Canada.

Recalling the situation of the “boat people” from South-East Asia, she said, “When the call came to sponsor refugees, what could we do but respond!”

“Eighty-seven years ago, I was a refugee,” said Fred, who was active in the formation of the Edmonton Mennonite Centre, and served on the board of the Calgary MCN in its second decade. Fred noted that, while the Mennonite Centres in both Edmonton and Calgary now rely largely on government funding, “they were able to take root and prosper because of the commitment of the churches to support newcomers.”

Mayor Nenshi, in closing the program, celebrated the opportunity for newcomers to have “a great Canadian life, no matter where you come from, who you love, or how you worship.”

Other highlights of the celebration included presentations on the Centre’s history, and a special announcement of a donation of $50,000 from the RBC Foundation in support of services for immigrant youth.