Why is it, all summer all you hear in Alberta mountain parks is bear stories? I mean “stories” as in “jokes:” so-called. Like the old klunker an otherwise pretty guide told us on the Maligne Lake boat cruise in Jasper: How do you stop a bear from charging? Answer: Take away his credit card. And she expected us to laugh. Some idiots did.

You see more deer than bear in parks, but nobody tells stories that are supposed to be funny about them. Nor mountain sheep. They’re pathetic, mooching along the highways all summer and nibbling junk from some kid’s hand while mama shrieks, “Be careful-Oh-they’re so cute!” and papa squeezes off another fifty feet of 8 mm. and then in fall with their digestion wrecked and the tourists gone, either the long-distance truckers wheeling through smash them or they go belly-up because there’s no barbecued potato chips growing in the grass. I mean, I take pictures too, sure, but any junk food I buy my kids eat; their stomachs can take it.

My son – I only have one, also four girls, all older – my son Havre and I took that Athabasca River Raft Ride and there we heard the silliest bear story of all. You’d figure that for a two-hour ride at $12.75 per adult and $6.50 under twelve – since when is a thirteen-year-old adult? – they’d have quality stories when there’s nothing but the usual scenery sliding past, which is most of the time with Edith Cavell sharp and frozen enough but looking more or less always the same in the background. Our raftsman with muscles like Pete Rose handles the raft’s big sweep easy as a toothpick through rapids and you figure in the calm he’ll come up with a man’s story, but he pulls one out about a guide, four nuns, and a grizzly!

They meet this big grizzly on a mountain path and the guide tells the nuns just keep calm and take one step back. They do, and the grizzly takes one step forward. The guide tells them just keep calm and take two steps back. They do, and the grizzly takes two steps forward. By then the nuns don’t think too much of their guide’s advice so they try their own technique: they kneel down and start to pray. And sure enough, the grizzly kneels down and folds his paws just like he’s praying too and the nuns get real happy, see, he’s religious, he won’t bother us. “Nah,” the guide says all grey and shaking, “he’s the worst kind. He’s saying grace.”

Some clods practically fall in the river laughing at that one. I had to give little Havre a bat, he was laughing too. We ran through the long rapids then just opposite Belchers Cabins and for a while that kept me busy hanging on with Havre yelling… and all the women aboard – I had sent my wife and the girls to take some good pictures of flowers – shrieking, grabbing their men like they wanted to throttle them right there in their own life jackets, but then I got to thinking: would that story have such a kick had it been a bull moose? No. And just tourists, not nuns? No again. The joke is in the danger: like this raft ride, you want to be scared but you want to know for sure it isn’t really deadly – they tell you three times when you buy the raft ticket they’ve never lost a passenger yet, not even bust a neck – just the feeling of danger maybe. That’s it, that and the religion: danger and making fun of religion, there you’ve got the biggest laugh multipliers of all. Kneel down to pray and nowadays somebody will kill himself laughing.

This piece, written in 1978–79, is an excerpt from a short story entitled “Bears, all the time bears,” and is reprinted with permission from Rudy Wiebe: Collected Stories, 1955–2010, published by the University of Alberta Press, 2010. Rudy Wiebe was the first editor of the MB Herald, 1961–63. 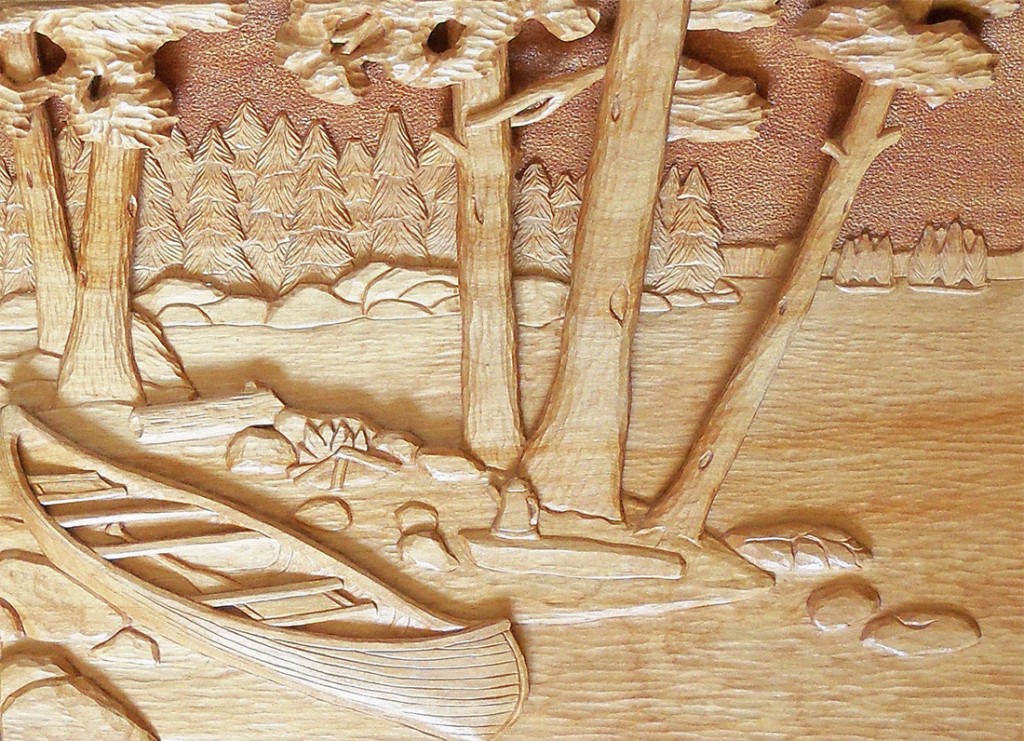 Brian Neufeld lives in Saskatoon with his family and attends Faith River Christian Fellowship (MB). This piece is carved by hand from one block of wood, using only a mallet and carving chisels.