What's New
Through the conflict, life carries on in Ukraine
A FOCUS on Mission
Must Patience Be So Slow?
Harold Jantz: A Heart for the Mennonite Story
Lorlie Barkman: A Life of Creative Engagement
Last Days, First Days
Women in Ministry: Bertha Dyck
January Moment in Prayer “Holy Spirit—Fill Us!”
The Church as the Patient Body of Christ
Advent: Making Much of Jesus: Christmas Day
Home MB HeraldColumns Editorial and prospectus 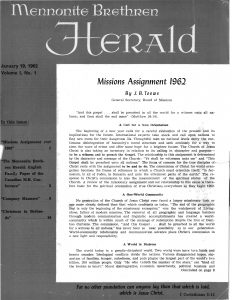 This is the first time that the MENNONITE BRETHREN HERALD, official publication for Canada of the North American Mennonite Brethren Conference, enters your home. It enters as a silent m messenger, charged to perform a great mission and to proclaim a glorious message. It directs its appeal to every member of the household, endeavouring to befriend old and young.

Its purpose is to serve the brotherhood in manifold ways.

It will strive to educate and to edify; to inform and to in-spire;

to foster love and loyalty for Christ and His Church;

to broaden our vision and to correct or confirm our views;

to credit our virtues and criticize our vices.

It will present to us the physical and spiritual plight of man and the bountiful provisions of God in Christ Jesus. It will challenge to intensive service and call for intercessory prayer.

It will publish our doctrines and proclaim our duties.

We commit the Mennonite Brethren Herald to God for blessing and commend it to the brotherhood for profitable use.

Your prayerful support and cooperation is needed for continued success.

Moderator of the Canadian M. B. Conference

It is conceivable that at no time in his career will an editor feel so free to state his opinions as in his first editorial. If he is foolhardy enough, he will bare himself regarding all his future intentions; whether he ever achieves them probably depends as much on the vocality of his readers as on his own conviction and nerve to see something through. To any thoughtfully sensitive human being (and a Christian, of all people, should be that), life’s realities are often painful. But perhaps in this first editorial we can be forgiven if we try to look a few facts as squarely in the face as possible.

The first fact we must face is that, in the wrong hands, the printing press is more to be feared than the unbridled tongue St James denounces. It is to be prayerfully hoped and planned that the Herald will record the biblical teachings of our church: that it will never be used for unsound purposes.

Nonetheless, a second fact must be faced. The New Testament writings are evidence enough that the church has had serious problems since its very inception. The Mennonite Brethren Church is very typical in this regard. Frequently our method of handling problems has not been the biblical one of clear, outspoken teaching, but rather a simple matter of avoidance. Some summer day, it is hoped, will dawn when the problem will no longer exist. In the meantime, we look studiously in the opposite direction. The time has come when some biblical frankness in the right places would be advisable.

It is to be prayerfully hoped and planned that the Mennonite Brethren Herald will be one of these right places. Grappling realistically with problems will be possible only as concerned individuals put an effort into searching for biblical directives. This searching should not be left only to our ministers and leaders. Laymen should voice their thoughts. And though we will always listen carefully to our ministers, it is not to be supposed that they alone can speak on practical matters that sometimes bother the layman more than the minister.

No one, least of all this writer, will delude himself into thinking that a thin thread of ink across a few pieces of paper will solve a problem which it has taken the perverseness of human beings a decade to concoct. But if we as a brotherhood could learn to speak openly about such topics as deserve public airing, we would have solved the major portion of our problems simply in trying to define them.

There is a third fact to be faced. Christians’ problems have always been outbalanced by their joys. We as Mennonite Brethren have been reticent in the past not only in speaking of our problems but also in expressing our joys. Such dourness can lose a Christian a great pleasure: sharing.

It is to be prayerfully hoped and planned that the pages of the Herald will record many joy-bringing experiences in our churches. A current of Christian happiness – not froth – should be the power behind this publication.