What's New
Through the conflict, life carries on in Ukraine
A FOCUS on Mission
Must Patience Be So Slow?
Harold Jantz: A Heart for the Mennonite Story
Lorlie Barkman: A Life of Creative Engagement
Last Days, First Days
Women in Ministry: Bertha Dyck
January Moment in Prayer “Holy Spirit—Fill Us!”
The Church as the Patient Body of Christ
Advent: Making Much of Jesus: Christmas Day
Home Arts & Culture Glimmer of redemption as Hal Wiens returns 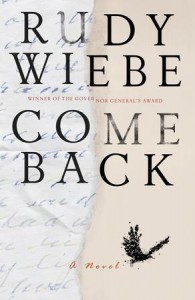 Rudy Wiebe’s latest novel Come Back is a gripping memoir of grief. Wiebe comes full circle in his more than half-century of literary production, returning to one of his first (minor) characters, and elevating him to a central role. Helmut “Hal” Wiens, the kid brother in Peace Shall Destroy Many (1962), is now in his seventies, retired after a lengthy career teaching English at the University of Alberta, and mourning the recent death of his wife.

At the novel’s outset, Wiens sees a fleeting but gut-wrenching apparition that jerks him headlong into a grief kept distant, numbed. The impossible yet undeniable glimpse of his long-dead son Gabriel walking the streets in Edmonton launches a search for his son and the reasons for his tragic death.

The story unfolds over the course of five days. Most of the action takes place in flashback, as Wiens pores painstakingly through the final journals of his son, stored untouched and in meticulous order for 25 years.

There is some minor external action, as Wiens visits with his Dene friend Owl, and even, briefly, as together they search the North Saskatchewan riverbank. So also with Gabriel’s memoirs of a trip to Europe. But all these shards of memory flow into a bleak solitude of two interior monologues, father and son, and the painful distance between them.

Here, the father’s search for the son is no heroic biblical parable, no God-like patient father waiting for the eventually repentant prodigal. Hal’s guilt and regret are palpable.

This is literature of loss, this is lament – and if the pain weren’t so real (more of that later), we might almost consider the lament beautiful.

The novel’s prose is vintage Wiebe: dense, often cryptic, knotty as pine. It abounds in literary allusion and quotation, and evolves into its own poetry in some later sections.

A key motif is set early on by a quote of Emily Dickinson: “hope is the thing with feathers.” Despite the bleakness of the story, these “feathers” feature prominently. Wiebe brackets the story with the flight of ravens – characteristically weaving in a First Nations perspective in counterpoint to the clearly Mennonite Christian protagonist.

Wiebe adds to the theme in a remarkable bilingual wordplay, with the occasional brief mention of Edmonton’s Papaschase Band land-claims controversy: papaschase – Cree for woodpecker (another thing with feathers); and “Papa’s chase” – that is, the father’s search.

Above all, the novel is a search for the jacket seen in the apparition: the “Orange Downfill” – feathers against all odds, and against all hope. (The book’s design employs this feather motif to good effect with the icon of a plume marking section breaks within the text.)

Come Back is compelling, but this story is not for all readers.

If your own wounds of grief are still tender, I would hesitate to recommend you reading this.

If you are new to the opus of Wiebe’s writing, start elsewhere, but certainly read until you end here. (Note: Wiebe rewards the readers of Peace Shall Destroy Many for 50 years of patience, with an afterword on that first novel: its title still rings true, but it also shines an unexpected glimmer of redemption.)

Wiebe explores, as he has done in previous novels, the moral and sexual complexities of life. As Hal Wiens works his way through his son’s journals, he (and we) slowly discover, with a growing queasiness, Gabriel’s singular obsession. These explorations are, however, handled with gentleness and respect.

The gospel shines through

Two things stood out for me as I read and reread this novel.

First: the extent to which Wiebe, the internationally respected author, continues to present the gospel on the very public stage of serious literature. We hear a narrative voice that is profoundly shaped, from start to finish, by the life of the church.

We hear, more specifically, the unique dialect and cadences of a Canadian Mennonite heritage. The words of Scripture and of hymns infuse Wiens’s ruminations – sometimes to sustain, more often to be wrestled with. This was the case in Wiebe’s first novel Peace Shall Destroy Many, but it is a wonder and a mercy that now, five decades later, he still dares to bring into the public sphere matters of Christian faith, the agony of theology that wrestles with issues of conscience, not content with cliché or simplistic traditionalism.

At the moving conclusion of the story, the words of Jesus drop down into the abyss of Wiens’s grief lightly as a feather, gently brushing against the pain in his heart, and urging his gaze upward to the divine source whence they came – a hint of hope beyond darkness.

A second point: in recent years, there has been a resurgence of interest in the Celtic Christian notion of “thin spaces” – those sacred places where the invisible world of the Spirit is especially close to the visible.

This novel is, I suggest, a literary thin space: a place where the creator (the author) comes numinously near to his creature (literary characters). And here I will invoke not Wiebe, the award-winning author, but Rudy, for he is also one of us, a lifelong MB brother.

Rudy has given us a novel, and it ought to be read as such; yet to those who are familiar with the man, widespread correspondence suggest there is something more to this work. Every novel is informed by personal experience. But it is uncommon, I think, that so many details of fictional persons, dates, locations and plot align themselves with events in an author’s life as they do here.

Come Back gives the impression that it is just a wingbeat away from autobiography. As an articulation of unimaginable personal pain, this is truly a “thin space” – and thus sacred ground.

As such, it calls forth a response from us. Not just the appreciation of the literary crowd, but the lament of the church, a plaintive and tormented cry which might yet grow (in the words of Hal Wiens) into prayer, and prayer into hope.

—Randy Klassen currently serves as restorative justice coordinator for MCC Saskatchewan. He is a member of West Portal Church.

Thank you for this very insightful review of an important, moving, and in many ways difficult book.