What's New
“I’m Sorry” : Pope Francis addresses a “deplorable...
A matter of love: Reframing abortion
“Any chance you might be expecting a goldfish?”
Abortion, the image of God, and faithful witness...
Choosing motherhood: The sacrifice of honouring life
MWC Assembly small but full of joy
Bad back doesn’t hold back MDS volunteer
Transition in CCMBC National Faith and Life Leadership
Leading through the trauma of covid: Part three...
The church distracted: When the main thing is...
Home Life & Faithfeature articles 7 tips for talking about missionaries

7 tips for talking about missionaries

In 2009, while I was serving with MB Mission in New Delhi, India, I received a text message from a friend that simply read, “I found your prayers on the net.” 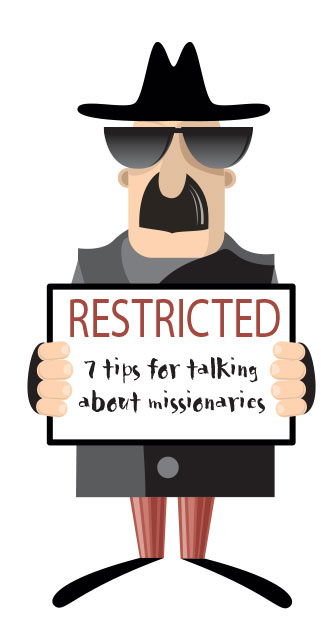 I was stumped. What did he mean? My friend, a Hindu, knew that I was a follower of Jesus and that I prayed. But what prayers had he
found online?

Our family arrived in India in 2005. Because of the cultural and political climate there, I entered the country on a business visa. In conjunction with our ministry, I had taken on a role as a sourcing agent for a Canadian carpet company. In our neighbourhood, I was not known as a “missionary.” Even though our friends knew of our association with the church, and specifically with Mennonite Brethren, I did not often speak openly about my role with MB Mission.

When I replied to my friend’s text message, he invited me to his house. On his laptop, he showed me how a simple Google search of his name had brought up the Daily Prayer Guide on the MB Mission website. There it was – his name, his wife’s name and a sincere request to pray for them and for us to get along with each other as our two families went on a vacation.

I didn’t know what to say to my friend. It felt like he’d read my diary. I scrambled for an explanation and tried to be as open and honest as possible. I had no idea that personal information I’d shared would be posted online.

Fortunately, my friend was not offended. On the contrary, he thought it was neat that people were praying for him. Whew!

But it’s not always that easy. Missionaries aren’t necessarily branded as such in other parts of the world. In certain places, a more subtle approach is needed. In areas where the gospel is not welcomed at all, even greater care is required.

Missionaries and their organizations take precautions to keep workers safe from harm or deportation, but it is absolutely critical that churches and individuals who support missionaries adopt these precautions as well.

The following is a list of seven things to remember when communicating about and with missionaries who are serving in restricted areas:

1. Google searches everything! Posting information online makes it available to everyone around the world. All files and attachments can be searched, including church bulletins and annual reports.

2. Communication is rarely private. Phone lines can be tapped. Mail can be opened. Even “secure” email can be cracked. Encryption technology is improving, but so are the hackers.

3. Church buildings are open to the public. Anyone can walk into your church foyer and read the bulletin board, including representatives from foreign governments. It happens.

4. Choose your words carefully. Avoid trigger words like “missionary,” “church” and “conversion.” Let the worker be your guide. Also, avoid political words that can be sensitive.

6. It may not be illegal to be a Christian in a restricted area, but it is sometimes illegal to proselytize, so be careful how you communicate about evangelism and outreach activities.

The internet is part of the new reality in global mission that we all face together. As we take these precautions seriously, we also want to remind each other that God is bigger than any challenge we face.

Let’s pray for wisdom and use discretion, but let’s also be strong and courageous in the task of bringing the gospel to the least reached.

—Mark JH Klassen, MB Mission’s staff writer, lives in Yarrow, B.C., with his wife Amy and their three daughters. They returned to Canada in 2011. The Klassens are members of Yarrow MB Church.