Young adults ring in New Year on their knees

Some 220 young people from across Canada and the U.S. elected to spend New Year’s Eve at church, repenting of corporate sin. They were responding to a challenge from MB Mission to mark the turn of the calendar in Abbotsford, B.C., by renewing – or perhaps discovering – the call of God on their lives at re:TURN, a conference to inspire 18–35 year olds.

“Re:TURN was life changing,” said participant and Mountain Park Community Church member Taylor Lundberg. “My 2012 was very tough; praying into the new year and taking communion was a great way to start 2013. The renewal and refreshing I received from God was definitely worth the two days.” 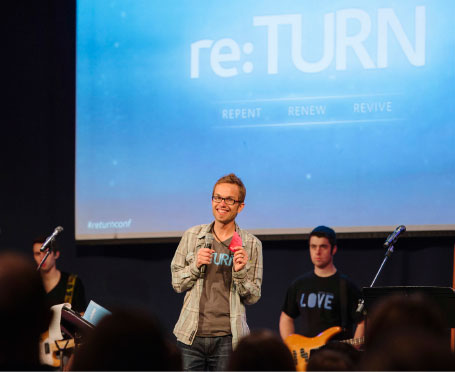 MB Mission short-term mission coordinator Sam Dick was event MC and one of the plenary speakers.

“We didn’t expect life to get hard when we turned our lives to Jesus, many of us as young children,” said MB Mission short-term mission coordinator Sam Dick in an opening session. The conference would “make space” to “pull the call off the shelf,” Dick said.

“We need revival, but we don’t know what that’s going to look like.”

Christians need to have “the DNA of the Lamb” as found in Revelation 14, said MB Mission general director Randy Friesen in the first plenary, telling stories of fervently evangelistic converts in North Africa and Asia as he urged youth to be radical followers of Jesus. 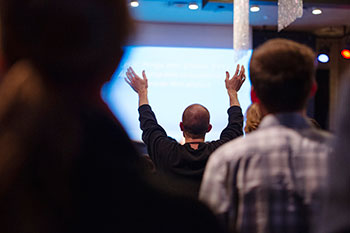 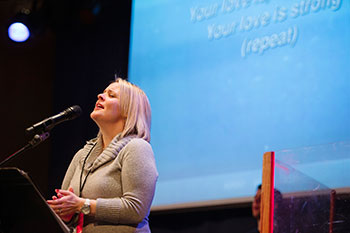 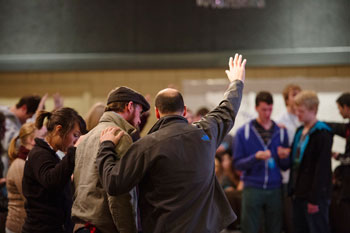 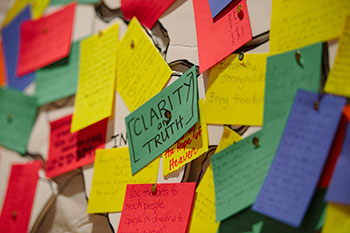 Above: Written prayers for Christians around the globe adorn a cut-out world map.
All photographs by Revival Arts

Plenary speakers Friesen, Dick, Carol Letkeman, and Mark Zhou spoke honestly from personal experiences, leading the way to times of corporate prayer for the nations and repentance for the sins of North American Christians. “We’ve lost sight of how to follow Jesus in a way that transforms,” U.S. Midwest short-term mission coordinator Joanna Chapa confessed on behalf of churches in a young leaders panel discussion.

Attendees were eager to regain that focus. Asked to name things that distract North Americans from Jesus, these young adults listed comfort, individualism/independence, leisure activities, broken families, tolerance of sin, and failure to see those who are different from the majority in our churches (e.g., Indo-Canadians in Abbotsford, First Nations people in Canada).

As the hour neared midnight, prayer coordinator Esther Corbett spoke about the freedom Jesus offers. “Confession and repentance move us out of sin management into freedom,” she said. “If we want to move into our inheritance, we as a community need to repent of our collective sins.” MB Mission staff led prayers of repentance for the cultural sins named earlier, and the band took the stage to ring in the new year with songs of praise to God.

Seattle pastor Herb Marks closed the conference the following day by praying for a baptism of the Holy Spirit on attendees. “When Jesus gives you full revelation of who he is, it’s not to keep it to yourself; it’s to take him to your town (John 4),” he said.

Lundberg was full of enthusiasm for the conference: “I have a newfound fire for the Lord and it’s all because of my experience at re:TURN 2012.”

Said Dick: “There’s something intangible yet very special when young leaders from both sides of the border [35 came from the U.S.] gather to worship Jesus and dialogue together about what a renewal movement might look like in their context.”

Re:TURN 2012 was life changing. Being able to pray into the new year, and taking communion was a great way to start my year. My 2012 was very tough – being able to feel complete freedom from everything has been amazing. God’s presence was surely upon that weekend. I personally really enjoyed the worship: it helped me connect on a very personal level with God, something that I have never been able to achieve before. The renewal and complete refreshing feeling I received from God was definitely worth the two days.—Taylor Lundberg, member, Mountain Park Community (MB) Church, Abbotsford, B.C.

No chapter in the Bible gives a better taste of how the first-century kingdom of God movement spread and the churches it left in its wake than Romans chapter 16. At re:TURN, , we met such a church, that meets in the home of Dennis and Mistin Wilkinson in West Vancouver. Is this part of a movement in our day, circling the earth, and seeing essential church being returned to common people in common places?

Jesus came to make disciples and commanded us to make disciples. Where two or three of us aspiring disciples gather to work at “overcoming” our inconsistencies (between what we believe and what we are), there Jesus is present to help us. There, disciples are being made – disciples, who can go out and make more disciples – for it’s out of disciples, that Jesus builds his church – “little flocks” of local, reproducing churches! That is how the Good News of the Kingdom spreads.

As with the 12 in the Bible, so with us: We know what Jesus wants of us, but we lack, in ourselves, the power to do it! Jesus said, “Stay in the city until you have been clothed with power from on high” (Luke 24:49). As with the 12, we received the Holy Spirit when he breathed on us and we were born again. And, as with the 12, he says to us: “John baptized with water, but before many days, you shall be baptized with the Holy Spirit…and be my witnesses…to the end of the earth.”(Acts 1:4-8)

Let us pray that Jesus will baptize each of us with his Holy Spirit, that he will open up “simple church” options for us, and that MBs will receive this new “simple church” move of God with open arms.  Jesus promises: “If two of you agree on earth about anything they ask, it will be done for them by my Father in heaven….” (Matthew 18:20).—Herb Klassen, member, South Abbotsford (B.C.) MB Church