What's New
Boldly advancing the gospel from our knees
MCC sends food and relief to Cubans in...
Robert Dagenais, pastor of the Sainte-Thérèse church, is...
More donated hay needed to help farmers in...
“God’s time was perfect”
Hope and pray every day
Resilient Leadership: The gift of self care
Project Redemption
Blue Christmas
“Repent, for the kingdom of heaven is near.”
Home Life & Faithfeature articles When Christmas came to Kennedy

When Christmas came to Kennedy 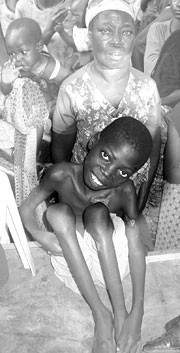 We were known in the markets of Zambia as “Christmas.” As our team of 12 walked through the stalls where vendors sold fresh mangoes, smelly dried fish, and other produce, they would call out to us, “Please give me Christmas. I also want Christmas!”

A year ago, our team leader’s wife Moira wanted to bypass all the Christmas stress and clutter. She had read in Nehemiah 8:10, “Go home and prepare a feast, holiday food and drink; and share it with those who don’t have anything: This day is holy to God. Don’t feel bad. The joy of God is your strength!” (The Message). With that, Moira’s dream to take Christmas to Zambian orphans and vulnerable children began. One by one, we had joined her dream for a Christmas like no other.

A tearful Moira told us about Kennedy after she had met him on a home care visit with some Hands@Work Zambia volunteers. But what she said didn’t prepare me for my own encounter with him.

At first glance, Kennedy could draw a gasp – an emaciated 12-year-old boy with open sores on his frail body, folded up like an accordion.

But that wasn’t what commanded my attention; it was his eyes. His eyes mesmerized me. I was transfixed by his clear, wise gaze. Here was a boy who, in his 12 short years of life, knew more emotional and physical pain and loss than many know in a lifetime. But his eyes spoke of hope. Hope in something much bigger than his tragic circumstances.

And that’s how Christmas came to Kennedy.

It was New Year’s Eve and the sky was perfectly clear. The sunset was exquisite and the stars were a canopy in the sky. We came to the village of Makululu, a shantytown of 60,000, to show the Jesus film. Before the film started, some of us went to Kennedy’s home.

Kennedy was an orphan. His parents had died of AIDS and he was living with his grandmother. Kennedy spent most of his days sitting in his “folded up” position, watching the world with those penetrating eyes. His grandmother’s wish was a wheelchair for Kennedy so he could go to school. Everyone else knew he was too sick to ever use a wheelchair.

That night, as we walked towards his mud hut, Kennedy sat as if he were waiting for something special to happen.

The grandmother rushed to create comfortable seating for her visitors, and as I sat down on the stool provided for me, God did something hilarious. He sent a bug – a really big bug – bigger than the dragonflies that flew around us. For some reason, this particular bug decided to dive-bomb my head. I screeched an unprofessional, unpastoral screech and quickly covered my head with the neck of my jacket.

At first I heard it and then I saw it. Those dancing eyes and serious face broke out into a melodious laugh. Kennedy threw back his head, and laughed and laughed and laughed. This boy with crystal-clear eyes, whose body was wracked with pain, was also a typical junior high boy who loved to laugh with others at their misadventures.

Kennedy’s grandmother brought him on her back wrapped in a chitenji to the Jesus film that evening. They had also come to view the film the night before and both had prayed to receive Jesus.

That night, during the scene of Jesus healing the lame man, I felt compelled to reach my hand towards Kennedy, and without touching him, I prayed that the same Jesus who 2000 years ago performed miracles for young and old, would reach out and transform his life.

Several days later, our team leader arranged for us to take Kennedy to a doctor in the city of Kabwe. The “Christmas 12” waited for the likely verdict of Kennedy being HIV-positive. I kept praying for a miracle.

Then we heard the words, “He’s not HIV-positive! He’s negative. And the doctor believes that, with surgery, Kennedy will walk again.” As we bounced our way back to the village along the rough roads, silent prayers went up to our amazing God, who can do the impossible. We had witnessed a miracle.

Christmas had come to the village of Makululu and to Kennedy. The flicker of hope that I had seen in his eyes at the beginning was now a bright light. Not only was there a future and a hope for him in his medical condition, he was now a child of the King – Prince Kennedy.

Merry Christmas, Kennedy. Thank you for teaching me that the God of Christmas 2000 years ago is still mighty, powerful, and loving. For as much as Kennedy received the gift of eternal life and hope for a future, those of us who had the privilege of being in his presence were reminded of the true meaning of Christmas – “peace on earth and good will to all!”