View From the Urban Loft

City vision in danger of losing sight of gospel 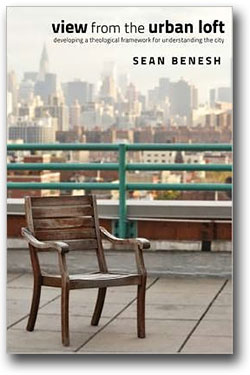 “It is my contention that the city, though plagued with many social ills and broken on numerous fronts, is still at its core a gift from God. I would even venture to say it is the result of divine intervention.” So writes Sean Benesh, director of the Epoch Center for Urban Renewal, in his seminal book, View From the Urban Loft.

As Benesh unpacks his thesis, he takes the reader on a storied history with a deep theology surrounding the rise of cities, the purpose behind their development, and how we can think and interpret the city from a biblical perspective. Benesh has a high view of cities; rather than being places of derision, deserving of ridicule, contempt and abandonment, they are places of refuge, culture, influence, and blessing.

As he unfolds the development of the city, Benesh challenges the reader – and the church – to consider the role we play in urban renewal and the transformation of the city. “We are called to model a better way more than we are called to criticize the existing one,” Benesh writes. “In the interplay between Scripture, church, and culture, our predisposition is to think first and foremost in terms of church questions – Scripture and culture have become secondary to and a function of the church effectiveness questions.” Later he asks, “What role does the church play in renewing the city? Is it simply populating heaven or is it also enacting social justice?”

Benesh’s critique is a valid one. All too often in our church culture, the ethos, function, and traditions of the church take precedence over the mission and mandate of the church. In my opinion, it’s legitimate to evaluate whether we as the church abandon the city by failing to take on a role in renewal, justice, equality, and the social and physical dimensions of life.

City transformation is the naturally occurring byproduct of a transformed life. When men and women are changed by the radical work of the cross, social justice, equality, citywide renewal, and similar activities will naturally be generated and lived out and the city will become more of what God intended from the beginning.

In View From the Urban Loft, Benesh provides the church with an interesting history of the city and a thought-provoking challenge regarding our responsibility for working and living in an urban context. However, it’s easy to get sidelined by good and valuable activities – such as justice, peace, equity and other social causes – which are merely the conduit through which the church lives out its mission: sharing the gospel.