Teen comes of age by discovering the past 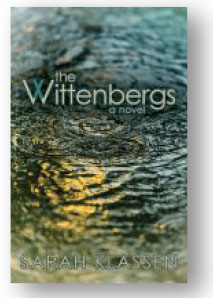 Mia Wittenberg begins her final year in her Winnipeg high school with youthful enthusiasm and hope for the future, but as she observes her family and friends’ struggles with priorities, morals, addictions, and failing hopes, her enthusiasm wanes. The one thing that keeps her afloat and at least outwardly serene through it all is her self-chosen assignment for English class: to interview her paternal grandmother and record the stories of GranMarie’s youth in Russia. These stories affect Mia’s perspective as she transcribes them, and gradually take root in the lives of her family in profound ways.

Sarah Klassen, author of several short story collections and seven books of poetry, as well as winner of numerous literary awards, has taught English in Winnipeg, Lithuania, and Ukraine. Her knowledge of subject and setting build a solid foundation for this literary work of loss, despair, and hope.

Choose to embrace or dismiss

Through the styles, events, and ever-present racial and economic tensions of the early 1990s, Klassen invites the reader into the Wittenberg family to observe and perhaps sympathize with their individual burdens, whether these burdens are self-inflicted or have been thrust upon them. The family seems lost to each other and to their ethnic identity, but this begins to change when GranMarie tells Mia her stories. These are tales of loss and grief beyond anything Mia has imagined, and she must choose whether to embrace them as her own history or to dismiss them as the rest of her family does.

Both informative and disturbing are the details of fragile X syndrome as shown through Mia’s two nephews, and the leading question, why would a good God allow such suffering? Why would he permit GranMarie to lose so many loved ones in her long life, and in the end, begin to also lose herself? Why are some people burdened beyond their capacity to bear it while others seem relatively free of trials? These and many other variations of the age-old question permeate the book, giving it an air of melancholy, but with a faint whiff of hope, mostly through Mia’s perspective.

Klassen gradually reveals snippets of the events that shaped the life of GranMarie, stories similar to those of many Mennonites who lived through the horrific times of the Russian Revolution and its aftermath. The Wittenbergs’ story begins in the troubled present of the Gulf War and moves backward, lighting here and there on pieces of the puzzle that eventually come together to reveal the final picture.

Present tense works well in this novel, with Mia’s assignments set off in past tense. The narrative flows with word usage that reflects the era and the characters. (I especially loved the sentence structure of the Ukrainians speaking English.) Mia is an admirable main character, a young woman coming of age in challenging circumstances, surrounded by caring but troubled people.

As a book written for the general market, The Wittenbergs is well done (although I missed the quotation marks in dialogue; has this become a prerequisite of literary fiction?). The settings are firmly grounded, the characters varied and consistent, the plot steady (if a bit slow), the themes strong. As stated on the back cover, “Only the oldest Wittenberg, the matriarch…can lead her family along the banks of the Dnieper and toward a better tomorrow.”

However, it is from there that red flags begin to appear for me. If this book is written for a general audience, then I commend it as masterfully accomplished, but if it is also meant for evangelical Anabaptists – for those who call themselves Mennonite for more reason than ethnic food and non-resistance – then I feel distinctly dissatisfied. The content reflects the general 1990s attitude toward ethnic background, wealth/poverty, sex, confession, and forgiveness. Even GranMarie cherishes secrets for which she is unrepentant, and all is acceptable as long as the characters have come to some form of peace within themselves.

I think our evangelical beliefs require the presence of Christ in all areas of our lives. In truth, a grandmother’s memories cannot redeem a lost soul. I kept waiting for the characters to realize their helplessness to heal themselves, to see their need of a Saviour. The absence of a truly spiritual perspective leaves a gaping hole in the story for me.

In this age of relativity, do we not desperately need our True North?

I agree with the reviewer that “our evangelical beliefs require the presence of Christ in all areas of our lives”. However, I disagree with her that there was “the absence of a truly spiritual perspective” in Klassen’s novel. The novel is a portrayal of a family that has lost touch with its spiritual roots and is struggling to come to terms with the emptiness of its existence. This family is desperately floundering and looking in all the wrong places for its “True North”. Mia’s search for meaning by going back to discover the values of her forebears inserts a glimmer of hope into the vacuum in which this family finds itself. That is the “spiritual” message I received from Klassen’s book. Surely, as a writer of fiction the reviewer is aware that her readers must read between the lines to discover the deeper meaning the author portrays.