What's New
Delete or not to delete, that is the...
Believers bring water for drought baptism
Encouragement to those in the arena
Keeping attention and making an impact: A few...
Open hands to reconciliation
From the editor
Approaching truth and reconciliation with love in our...
MB Seminary offers new MA in Transformational Leadership...
Multiply August Ukraine Updates
Book Review of Return Stroke: Essays & Memoir...
Home News Syrian conflict continues to displace millions, Foodgrains Bank responding 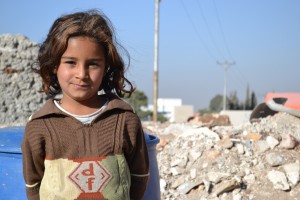 A photo of a dead child washed up on shore. Crowds of refugees walking towards safety in Europe. Overcrowded boats filled with frightened families.

These are some of the images that have filled our TV screens, newspapers and other media over the past few months.

Many of these refugees are from Syria. As that conflict continues into its fifth year, Canadian Foodgrains Bank, through its members, is continuing to respond to the suffering.

With support from the Canadian government, the Foodgrains Bank has programmed almost $25 million in assistance since 2012 for Syrians living in Lebanon and Jordan, and in Syria itself.

Currently, the Foodgrains Bank is responding through eight projects.

In Lebanon, one project provides food vouchers for 5,800 refugees who have depleted most of their savings. 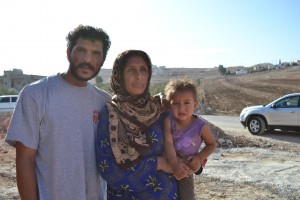 Abdel el-Razek, his wife, and their youngest child outside their tent near Irbid, Jordan. PHOTO: Amanda Thorsteinsson

In Syria, another project provides 17, 500 people with monthly food boxes while a second helps 3,500 displaced families.

In Jordan, a project provides food for 500 families each month.

Altogether, more than 375,000 people have been assisted since the beginning of the conflict.

“The images and the numbers are so overwhelming,” says John Longhurst, who directs Resources & Public Engagement for the Foodgrains Bank. “It’s as if the whole population of Western Canada was forced to leave their homes.”

Faced with such huge needs, “it’s hard to know what to do to make a difference,” he says. “One way is make a donation to help those who are struggling to survive because of the conflict. Another is to pray for peace in the region, so people no longer need to flee.”

People who would like to make a donation to help those affected by the crisis in Syria can go to www.foodgrainsbank.ca

Members of the Foodgrains Bank that are implementing programs for people from Syria include Mennonite Central Committee, Canadian Lutheran World Relief, Canadian Catholic Organization for Development and Peace, World Renew, and Canadian Baptist Ministries, with the financial support of other Foodgrains Bank members.