What's New
Delete or not to delete, that is the...
Believers bring water for drought baptism
Encouragement to those in the arena
Keeping attention and making an impact: A few...
Open hands to reconciliation
From the editor
Approaching truth and reconciliation with love in our...
MB Seminary offers new MA in Transformational Leadership...
Multiply August Ukraine Updates
Book Review of Return Stroke: Essays & Memoir...
Home Arts & Culture Stories are strength of history

Stories are strength of history

Red Quarter Moon: A Search for Family in the Shadow of Stalin
Anne Konrad 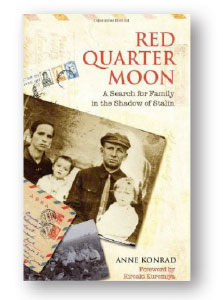 Part memoir, part history, and part historiography, Red Quarter Moon details Anne Konrad’s search for Mennonite relatives who remained in Russia through the tumultuous years of revolution, civil war, as well as the rise and fall of the USSR. Her own parents fled in 1929; the author undertakes to find out what happened to family members who remained and subsequently disappeared or were cut off from contact with relatives abroad.

It’s a sweeping volume, covering decades of history and multiple branches of the author’s family. It also details how Konrad went about obtaining her information, from hand-copying restricted documents in freshly-opened secret police archives, to slogging through muddy roads to interview the last surviving “ethnic Mennonite” in an isolated village. The author, a member of the Writer’s Union of Canada, is an English and history teacher, and has penned several other books and short stories.

A member of the “younger” crowd, and not sharing the author’s ethnocultural background, I was hoping Red Quarter Moon would deepen my understanding of Mennonite culture, history, and theology, and of the charter generation of my MB church. Definitely not for those having no familiarity with Mennonite or Russian history, the book is a good resource for those looking to deepen existing knowledge. Also, the foreword by Hiroaki Kuromiya provides a critical foundation of knowledge of the sweeping political changes in Russia in the 20th century and of Mennonite history that makes the rest of the book much easier to understand.

Readers will enjoy Konrad’s narrative style, giving interest and vibrancy to material which could easily be considered dry. She interjects her own memories and experiences, making the book more personal. Where many other works focus on those who escaped, Konrad approaches the story from the perspective of those left behind. She includes some aids such as family trees and pictures to identify who’s who and connect faces with names.

Both Konrad and her husband (a history professor and contributing researcher to the book) clearly have a passion for their cultural history. The book outlines the extensive first-hand research they conducted, including visiting remote villages, government archives, museums and historical societies, and interviewing relatives. Red Quarter Moon should give readers a better appreciation for the time and effort that goes into historical research; the sheer determination and effort evident in Konrad’s research work is admirable. In this regard, the process of “Search for Family” is nearly as compelling as what became of the individuals themselves.

Red Quarter Moon makes a compelling and unspoken argument for the importance of keeping histories and maintaining family ties, especially when we have the freedom to do so. Subsequent Mennonite generations who, like Konrad, want to find out what happened to their families in the USSR, will discover that years of living in a culture of fear, silence, and distrust meant many details were lost or purposely destroyed out of self-preservation. In many cases, relatives who were the keepers of family histories are missing, dead, or extremely reluctant to speak. Red Quarter Moon shows that we may not be able to find familial and cultural histories in the future, therefore encourages us to learn them now.

Red Quarter Moon has some shortcomings which may put off both recreational readers and history buffs. The book makes heavy use of German and Russian terms and place names – often (but not always) translated, or explained once then reused without re-translation.

The book is not strictly chronological; rather, it intertwines the stories of Konrad’s various relatives with historical events, changes in political policy, Konrad’s own memories, as well as the details of how she and her husband undertook their research. The structure doesn’t ever follow one individual’s story from start to finish, so I found myself losing track of people, places, and events. Although there are family trees and maps at the beginning of the book, the dense (and confusing) web of names – places and people – would be better understood if relevant portions of the family tree and maps were included as reminders when individuals were introduced/reintroduced.

For historians, Konrad’s narrative tone may be too informal, and she occasionally fills in the blanks with speculation of what might have happened. In addition, much of the supporting research in the endnotes is Konrad’s own work or the work of her husband. This is reasonable given the subject matter of the book and the extensive research they have personally undertaken, but it’s also a weakness in terms of presenting balanced research.

Understandably, the book displays a bias that portrays Russian Mennonites sympathetically – victims by default. If in doubt, Konrad “sides” with them; for example, she concludes a certain relative must have been falsely accused and convicted (in the typical fashion experienced by Mennonites), even after noting that the interrogation record contained atypical details that might warrant suspicion.

I felt myself wanting the book to delve deeper into the spiritual component of the persecution experienced by Mennonites, such as their biblical stance on the issues facing them, and how their faith weathered the storm of such intense and targeted persecution. Christians looking for stories of responding in faith to persecution may not find this book compelling since its focus is elsewhere.

Though the book does not tackle theological or spiritual topics, I did take away from this book a better understanding of the climate of the time and a greater appreciation for those who lived through it and of Mennonites who come from this heritage.

Branch: a memoir with pictures

Skeptic gives way to mystery and mercy of...