What's New
Delete or not to delete, that is the...
Believers bring water for drought baptism
Encouragement to those in the arena
Keeping attention and making an impact: A few...
Open hands to reconciliation
From the editor
Approaching truth and reconciliation with love in our...
MB Seminary offers new MA in Transformational Leadership...
Multiply August Ukraine Updates
Book Review of Return Stroke: Essays & Memoir...
Home Arts & Culture Would-be pastor turned actor shares joy and sorrow 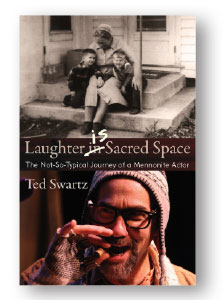 Laughter is Sacred Space: The Not-So-Typical Journey of a Mennonite Actor
Ted Swartz

Not only the journey, but the telling itself of Ted Swartz’s biography Laughter is Sacred Space is “not-so-typical.” A Mennonite actor, creator and co-creator of plays for more than 20 years, Swartz formats his personal account according to the five-act structure of storytelling: exposition, rising action, climax, falling action, and denouement. To dispel confusion for those not familiar with script formats, Ted provides a guide to the layout of the book following the foreword, called “Wait, Who’s Talking Now?!”

Swartz continues his light, tongue-in-cheek tone within the five-act structure as he nicknames the chapters with ridiculous and long descriptors of content (“Laughter and the Bible: Comedic Exegesis Does Not Bring Fire down from Heaven”). This convention is set at the beginning of the book and carried throughout, much like a good play.

Having been commissioned by his church family in Pennsylvania and given financial support to attend seminary, Swartz was studying toward becoming a pastor when he decided to tempt fate by taking an acting class for credit. The rest, as they say, is history. Yanked out of his comfort zone, the experience showed him a world he didn’t know existed.

Swartz discusses the idea of calling, and openly wrestles with his own heart’s desires versus God’s supposed calling to be a pastor. By the end of the book, it’s clear that Ted Swartz, alongside a community of people helping him, has touched many lives with the gift of storytelling and laughter. His depiction of the formation of his company with Lee Eshleman is heartfelt and sometimes painfully honest.

The title Laughter is Sacred Space immediately intrigued to me. Would grief and suffering also be found as sacred space? Art provides a wonderful avenue to worship because it allows a full range of emotion and experience to permeate the soul and renew healing and closeness with the Creator. Would Swartz create space for that spectrum?

Mainly through processing the untimely death of his long-time business partner and close friend, Lee Eshleman, Swartz does acknowledge grief and suffering as a way to God. (The title simply reflects Swartz’s introduction to theatre through comedy.) In the last chapters, Swartz allows the reader into his grieving process. I enjoyed these chapters the most because death is the catalyst for big questions and often, for clarity in one’s life. Swartz discovers the power of theatre through his tumultuous healing by performing after Lee’s death. “I sang Lee’s part – in essence, doing my best imitation of Lee singing Laban’s role,” he writes. “It felt like the right thing to do. It was the beginning of a unique healing experience through the arts: performing and writing my way out of grief.”

Often, one assumes the artist performs on stage to give the audience a gift. Sometimes it’s cathartic laughter, other times didactic storytelling. I was glad to be reminded of the gift of the arts to the artists themselves. Swartz describes his experience in theatre as “a life full of wonder.”

At the beginning of the book, Swartz takes his time describing his childhood, without explaining what the seemingly insignificant stories had to do with the bigger story of Swartz’s journey into theatre. Overall, however, Swartz’s story is an engaging discussion of how artistic ability and passion can indeed be coupled with one’s desire to follow God.

Also a middle child, an actor, and a person from an (ethno-cultural and religious) Mennonite background, I felt as though Ted Swartz and I could get along just fine. It’s not often that I find someone in the acting profession from a Mennonite background, let alone someone who has stayed and flourished in that faith community. I commend Swartz for his ability to use his faith journey and his upbringing to bring art – and consequently healing – to audiences around the world.

—Karyn Guenther is an actor based in Vancouver, B.C. She is currently an apprentice for Pacific Theatre, a faith-based professional theatre company, where she starred as Blake in Leave of Absence (read review here). She is a member of Bakerview MB Church, Abbotsford, B.C

Branch: a memoir with pictures

Stories are strength of history

Skeptic gives way to mystery and mercy of...