What's New
Through the conflict, life carries on in Ukraine
A FOCUS on Mission
Must Patience Be So Slow?
Harold Jantz: A Heart for the Mennonite Story
Lorlie Barkman: A Life of Creative Engagement
Last Days, First Days
Women in Ministry: Bertha Dyck
January Moment in Prayer “Holy Spirit—Fill Us!”
The Church as the Patient Body of Christ
Advent: Making Much of Jesus: Christmas Day
Home Arts & Culture Curry, Corduroy and the Call 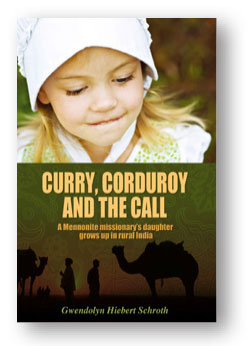 Though the eyes of a Third Culture Kid

Missionary autobiographies are abundant; what sets apart Curry, Corduroy and the Call by Gwendolyn Hiebert Schroth is that it chronicles the life of a missionary child. Hiebert Schroth spent her childhood bouncing between the United States and India in the tumultuous periods before the U.S.’s entry into World War II and after India’s fight for independence. In the prologue, the author states she felt compelled to write about her experiences so others could more fully understand the plight of missionary children “who, unasked, endured the sorrows as well as the joys of living in a foreign country.”

Hiebert Schroth was the sixth of nine children born to MB missionaries John and Anna Hiebert (brother Paul G. Hiebert became a famous anthropologist). As a child, she never understood how her father could uproot his entire family when he felt God had called him to the mission field. She often questioned the authenticity of the call, and resented the time and energy her parents poured into their mission work, as it deprived her of time with them. The hardest part of living in India was being sent to boarding school, separated from her parents for months at a time. Not until she was an adult was she able to understand her father’s calling, and develop a full appreciation for such an atypical childhood in a foreign country.

Curry, Corduroy and the Call could have degenerated into a “poor me” memoir, but it never fully takes that turn. Hiebert Schroth is extremely open about how she viewed things as a child, and the strength of the book is her ability to take an objective, adult look at pivotal childhood memories. She doesn’t seem compelled to portray an idealized childhood, nor does she exclusively dwell on hardships, but gives a fairly balanced evaluation of her past that is both insightful and entertaining. She also doesn’t hesitate to share doubts she had (and in cases still has) regarding her Mennonite faith – sometimes amusing, sometimes unsettling.

Corduroy, Curry and the Call is a well-written book which will appeal to a diverse audience. It should be read in particular by anyone interested in missions, as it provides a point of view which is often missing from other missionary memoirs. This book could also be used as a resource to educate church members about the challenges missionary families face, so the church could more effectively pray for and support missionary families.

It took courage for Hiebert Schroth to bare her life to the scrutiny of complete strangers and it would be easy to judge her, as she does not gloss over issues Mennonites would sometimes rather ignore (e.g. legalism). It should be noted that these issues caused her to become a Methodist later in her life, although she says a part of her will always be Mennonite. The most important quality in an autobiography is honesty, and that’s what makes this book worth reading.