What's New
A FOCUS on Mission
Must Patience Be So Slow?
Harold Jantz: A Heart for the Mennonite Story
Lorlie Barkman: A Life of Creative Engagement
Last Days, First Days
Women in Ministry: Bertha Dyck
January Moment in Prayer “Holy Spirit—Fill Us!”
The Church as the Patient Body of Christ
Advent: Making Much of Jesus: Christmas Day
Advent: Making Much of Jesus: Fourth Advent
Home News The least likely missionary engineer 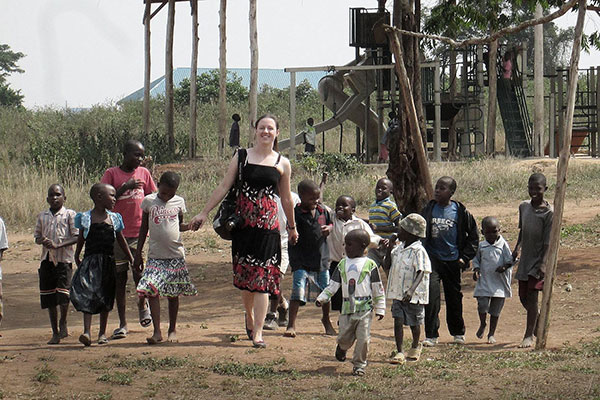 Interacting with some of the kids at Eagles Wings Children’s Village, a ministry I am on the
board for and have been able to be involved with long term. It has been a blessing to be able to see the site design I was part of start to come to life. 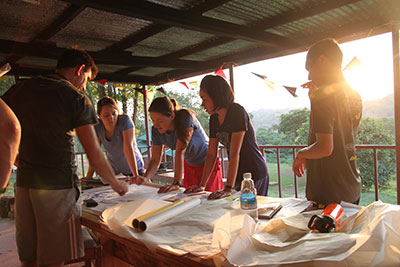 Working on a site design for a secondary school for Amazima Ministries near Jinja, Uganda

For a person who never intended to study engineering, Jaimee Schmidt can get pretty excited about toilet design. But what the Richmond Park MB Church, Brandon, Man., member loves even more than designing safe sanitation with Engineering Ministries International (EMI) is the people she helps and the God she serves by doing it.

“I’m not the one who chooses which project to go on; I think God ordains that,” Schmidt says. She has worked on 10 projects (usually about a week in duration) since 2009, self-funding the trips on her holiday time.

Volunteering on EMI projects gives Schmidt a picture of the body of Christ working in harmony. A group of strangers “get an exorbitant amount of work done in the course of a week in another country under conditions that are sometimes really difficult.”

Schmidt says it’s only possible because God is using each volunteer.

Local staff leave a lasting impression.  Ugandan engineering technologist Paul helped the EMI team with the site surveys, getting the opportunity to work with real – and top-of-the-line – equipment for the first time. 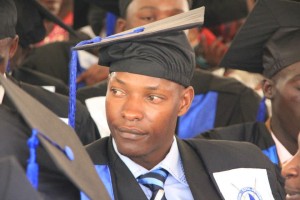 A student during Schmidt’s first visit, Paul is now the first member of his family to have graduated from university. Paul “had a lot of questions for us,” says Schmidt. “And we also learned a lot from him – insight into the local  culture that helped us design something that would be useful to them.” (Schmidt explains that the style of  sanitation facilities she designs in Uganda may not be appropriate in India – and both differ from North American
preferences.)

“This isn’t about us going over to some country and imparting our engineering knowledge on the people we meet,”  says Schmidt. “It’s being willing to listen and learn and walking beside instead of in front.”

Lessons of joy and heartbreak 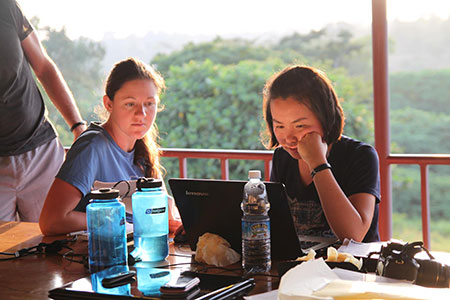 Working on a site design for a secondary school for Amazima Ministries near Jinja, Uganda

“Some days, the weight of humanity is crippling,” Schmidt says, recalling the face of a child she met in Haiti before the earthquake. Then she remembers these burdens aren’t hers to carry. “It doesn’t make all this injustice okay, but at the end of the day, I still choose to believe that God is good.”

At a Child of Mine orphanage in India, the director told her how God had answered their prayer for a bus to  transport the children to school – 17 years later. “I was humbled by the joy and thanksgiving they had,” she says.

“God reminded me of what it means to pray.

“My faith and my image of God look a lot different now than before I started doing all this,” she says. “I can believe God is good in the midst of things that don’t make sense to me.”

The irony is that Schmidt never had any designs on becoming a missionary – and even fewer on being an engineer. “This life of ministry that I’ve kind of fallen into wasn’t something I thought of for myself,” she says. “And only God knows how I came out an engineer!”

What makes a missionary family?