What's New
Ask God which town
Where to from here?
CCMBC National Director attends 2022 ICOMB Summit
MCC Canada and MCC Manitoba sell shared property...
The world appears to be growing darker
Sharing a new and unified language
6 reasons to attend the MWC Global Assembly...
One too many
Just one more
A safe place in Winnipeg
Home News MCC responds to severe flooding in South Asia 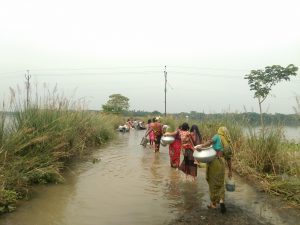 MCC is responding with emergency relief assistance in the wake of severe flooding and landslides across parts of Nepal, India and Bangladesh.

Two weeks of incessant monsoon rains occurring at the end of August displaced more than 1.7 million people and killed 1,246 in the region.

The floods have destroyed homes, crops and livestock, as well as important buildings like schools and health clinics. Families need food, clean water and shelter, and the flooding has caused higher risk of water-borne diseases.

John Bhattacharjee, the disaster response project coordinator for MCC in India recently visited West Bengal, one of the provinces affected by flooding in India and says the need is great.

“When I visited, the flood waters had gone down, but I saw people sleeping on the roofs of their homes, sometimes three families on one small roof because there was so much damage inside their houses,” he explains.

Some people lost their homes entirely and are living in camps. Many were forced to drink polluted flood water because it was impossible for emergency teams to get fresh water to everyone who needed it.

“I saw men, women and children drinking the flood water. They had no choice and many are sick with diarrhea now,” Bhattacharjee says. 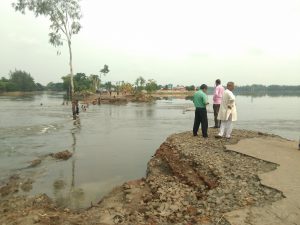 MCC is working with four partners in India to provide emergency food and water assistance to nearly 5,000 families in the affected areas. In addition, 600 people will receive hygiene kits and 56 families will get cooking supplies, bedding and lanterns.

In Nepal, MCC is partnering with Brethren in Community Welfare Society (BICWS) to provide tarps for 700 families as an emergency shelter, and is also providing food assistance for 1,290 families.

Food, water and shelter aren’t the only things flood-affected people need. Cases of malaria and dengue fever, both mosquito-transmitted diseases, are on the rise as flood waters recede.

In Kailali district of Nepal, MCC is providing mosquito nets and blankets to 300 families.

MCC in Bangladesh is assessing the situation and developing plans for a response, including agricultural recovery and a rehabilitation project with families to distribute seeds and fertilizer for the winter planting season. Affected communities have experienced three other floods this year alone. 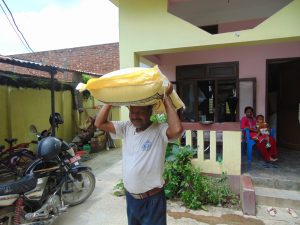 Together with our partners, MCC is navigating the best ways we can support flood and landslide-affected families, including long-term recovery plans.

“People have lost everything and we need to stay with them while they’re in real trouble. This is the right time for MCC to intervene,” Bhattacharjee says.

MCC welcomes your support for our relief work in Bangladesh, India and Nepal. To donate, visit www.mcccanada.ca/south-asia-flood-relief.

[Rachel Bergen is a staff writer for MCC in Canada.