What's New
Leading through the trauma of covid: Part two...
Ask God which town
Where to from here?
CCMBC National Director attends 2022 ICOMB Summit
MCC Canada and MCC Manitoba sell shared property...
The world appears to be growing darker
Sharing a new and unified language
6 reasons to attend the MWC Global Assembly...
One too many
Just one more
Home Life & Faithfeature articles The Starbucks effect of church planting

The Starbucks effect of church planting

A city story from the C2C Network

Over the years, Starbucks C

offee has built their company by doing something many people consider at odds with good business practice: they’ve opened stores across the street from one another. The company’s decision has resulted in increased profit and expanded market share.

In this spirit of expansion, C2C has seen a similar move of God in the city of Vancouver. Our strategy, when it comes to church planting, is to pray and trust God to raise up planters and determine locations. In fall 2013, when Westside Church moved to 777 Homer, right across the street from Artisan Church and just a few blocks away from where St. Peter’s Fireside church was launching, we celebrated how the gospel presence in the city was expanding.

Walk to the next church

Today, residing within a five-minute walk from each other, there are three distinct expressions of Christ’s body, the church. 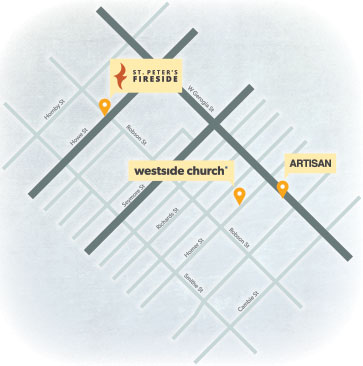 Westside Church, under the pastoral leadership of Norm Funk, is a contemporary mix of youth and music set to the solid beat of the gospel.

Artisan Church, where Nelson Boschman and Lance Odegard give pastoral leadership, is located in the Vancouver Public Library (VPL) and has a distinctively artistic, youthful flair that complements and builds on the proclamation of God’s gospel Word.

Head out the door from the VPL and up the street to the University of B.C. campus at Robson Square, and you’ll find Alastair Sterne proclaiming the gospel to young and old alike amid the liturgical setting of St. Peter’s Fireside. Three churches proclaiming the gospel with three distinct expressions of the church, all within a few short city blocks of one another.

If, as with Starbucks and other coffee houses, we were in competition with one another, this might seem an unlikely strategy. But, under the grace of the gospel, these churches are partners for the transformation of lives, and the fame and renown of our Lord and Saviour Jesus Christ.

United by their love of Jesus, these churches are ministering to the divergent city culture that is Vancouver, and they’re finding traction in their work. Westside, in their new location, continues to see growth and expansion taking place. Artisan, who could easily have felt like Westside was intruding on them, moved to a second service in February 2014 to accommodate their growth. And St. Peter’s Fireside, which launched in fall 2013, welcomes 80–90 adults each Sunday morning.