What's New
“I’m Sorry” : Pope Francis addresses a “deplorable...
A matter of love: Reframing abortion
“Any chance you might be expecting a goldfish?”
Abortion, the image of God, and faithful witness...
Choosing motherhood: The sacrifice of honouring life
MWC Assembly small but full of joy
Bad back doesn’t hold back MDS volunteer
Transition in CCMBC National Faith and Life Leadership
Leading through the trauma of covid: Part three...
The church distracted: When the main thing is...
Home News SOARing on a prayer

SOARing on a prayer

Another unexpected blessing for Dennis Wilkinson 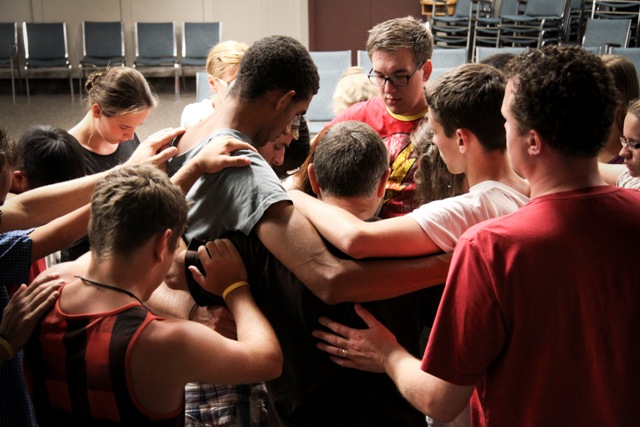 “Walking alongside” took on new meaning for Vancouver’s inaugural SOAR group of 30 (See “Vancouver’s SOAR lifts off”). Best had asked Dennis Wilkinson, an MB church planter in Vancouver, to meet with the group during their evening devotions. Wilkinson, known for his optimism and energy, is currently establishing Meta Communities in the West End apartment district, spreading the gospel and seeing encouraging signs in a neighbourhood with little apparent interest
in Christianity.

But church planting has its lows. The week Wilkinson spoke at SOAR, the West End was revelling in an annual festival that “celebrates radical sexual freedom.” Says Wilkinson, “This powerful, seemingly unstoppable, loud, aggressive movement seemed especially pervasive this summer.”

“I was simply overwhelmed by the spiritual darkness in Vancouver.”

Added to this sense of darkness came “the phone call.” Working out of their large house, the Wilkinsons have a stream of people coming and going. Then, someone in the neighbourhood complained to a social worker about the Wilkinson family lifestyle.

The complaint was baseless, says Wilkinson, and within a couple weeks everything was cleared up. “But the complaint cast some long shadows of fear across us. I felt as though we were in the path of a massive tsunami, a huge wall of wickedness and injustice that would consume our whole family.”

He was under this shadow when he met with the SOAR youth. Wilkinson decided to lay himself bare to the team, sharing his fears and struggles about the church plant’s prospects. “The team responded by gathering around, laying their hands on me, and praying fervently for the better part of half an hour,” he says. “As these people prayed, I felt the light of Jesus shining brightly in me again. The shadows of doubt and fear that were darkening my heart simply could not remain.”

He left, not only uplifted, but with a renewed conviction: “We must walk through life together! It’s part of what it means to be a Christian. I love the family of God.”

Since that time, Meta Communities has gained new momentum and more encouragement. They held a great summer-end community barbecue that attracted 160 people, and a first-ever meeting in a neighbourhood community centre.

The SOAR prayer session wasn’t a planned part of the presentation, but Wilkinson is grateful for the ministry.