What's New
Delete or not to delete, that is the...
Believers bring water for drought baptism
Encouragement to those in the arena
Keeping attention and making an impact: A few...
Open hands to reconciliation
From the editor
Approaching truth and reconciliation with love in our...
MB Seminary offers new MA in Transformational Leadership...
Multiply August Ukraine Updates
Book Review of Return Stroke: Essays & Memoir...
Home News Scholarship recipient gifted to serve 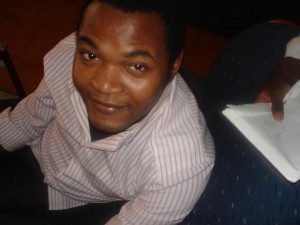 As son of the founding pastor, Moisés Mente has been involved in Igreja Evangélica Irmãos Menonitas da Amadora (Amadora Evangelical MB Church) since it began, but he’s still learning. “Bible school has offered me the basic tools to perform effective ministry, always grounded in Scripture,” says the young pastor. Mente is one of recipients of ICOMB’s Global Scholarship Fund (GSF) which disbursed $40,000 to 11 individuals and four schools for the 2013/2014 school year.

“It’s extremely important that the minister of God is thoroughly equipped to perform effectively in his ministry,” says Mente. The BA student, who has taken the mantle of pastor in the Amadora church, is currently studying theology at Instituto Bíblico Português do Tojal (Tojal Bible Institute), a nondenominational Bible school near Lisbon.

The MB conference in Portugal (Associação dos Irmãos Menonitas de Portugal) – which sponsored Mente’s application – has five churches and a membership around 200. It was an easy decision to support Mente for the scholarship, says AIMP leader José Arrais.

“He brings great authority when it’s time to develop new ministries in our conference,” says Arrais. “Our communities love [his preaching] because he explains in a very easy way what God is saying through his Word.”

The Amadora church serves mainly African immigrants (Mente senior is originally from Portuguese-speaking Angola), many of whom use the country as a stepping stone to finding employment in less economically depressed parts of Europe. Mente therefore ministers to a changing congregation of high needs people in transition.

For most countries in the International Community of Mennonite Brethren (ICOMB), the grants and scholarships that help North Americans study at a higher level are not available, says MB Mission capacity builder Vic Wiens. “The Global Scholarship Fund is a way of giving assistance (to those in the developing world) that isn’t available in those countries.” The bursary is granted on an annual basis with the possibility of renewal (subject to review) for length of program.

“The scholarship is focused on key people who will exercise influence and leadership in the church,” says Wiens. Past recipients include César García, currently general secretary of Mennonite World Conference.

Recipients are nominated by a national church or church-sponsored institution and commit to serving the sending group for three years after graduation. The student is encouraged to provide progress reports to the sending group.

The ICOMB scholarship program gives preference to Anabaptist schools and values programs of study that can be completed in the applicant’s home geographic
and cultural context. “Especially at the undergraduate level,” younger students are encouraged to “grow stronger bonds to their own conference and [culture] by staying in-country,” says Wiens.

The scholarship builds visionary leaders not only for the churches but also in fields like education, medicine and business. Current recipients from India and DR Congo are professors at MB Centenary Bible College, Shamshabad, and Christian University of Kinshasa (respectively), and the latter was also granted scholarship funds for the school of nursing.

Applications are due Jan. 31, 2014; a five-person committee awards scholarships – no more than two individuals from a single country until all conferences have been considered – at the ICOMB annual gathering in May.

In 2013, ICOMB set a goal of raising $1 million for the GSF in the next two years. “We had to turn down a number of very fine applicants last year [due to lack of funds],” says Wiens. “We’re looking for people who understand the high impact these global leaders can have in the church – and beyond. It’s an investment.”

Mente is already paying back. When Mente senior suddenly moved to France, AIMP asked Mente to take responsibility. “He was ready to do that, but at the same time, he asked for our support,” says Arrais. “His humble character came up again. We thank God for the blessing of having Moisés and the gifts he has.”

“I want to contribute maximum effort to applying the concepts I learned in Bible school to bless the church so God may be glorified and his kingdom expanded,” says Mente. “I want to be available to serve wherever needed for God’s purposes.”