What's New
A matter of love: Reframing abortion
“Any chance you might be expecting a goldfish?”
Abortion, the image of God, and faithful witness...
Choosing motherhood: The sacrifice of honouring life
MWC Assembly small but full of joy
Bad back doesn’t hold back MDS volunteer
Transition in CCMBC National Faith and Life Leadership
Leading through the trauma of covid: Part three...
The church distracted: When the main thing is...
Remote wilderness rescue turns into service with MDS...
Home MB HeraldColumns Salmon run 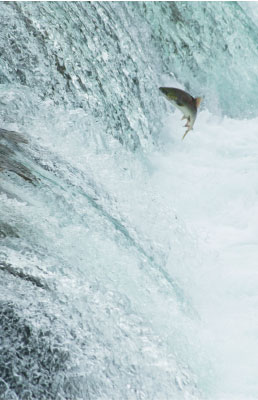 Everyone knows salmon swim upstream to spawn. Attracted by the sound of rushing water, they point themselves against the current and leap any obstacle in the way of their goal. The migration pattern of this counterintuitive fish has become my shorthand for the challenge not to “conform to the pattern of this world” (Romans 12:2).

When I was in college, the maze of one-way streets in downtown Winnipeg regularly frustrated my good friend Joe and me as we prowled the city. When we needed to go left, it seemed all the streets were one-ways to the right.

Sometimes – impulsive college students that we were – we would cautiously scan all directions for observers, shout “salmon run!” and illegally zip up the block to our destination. Travelling “upstream” on a street might invite a jolt of adrenalin, but it’s quite dangerous: I don’t recommend it! However, for a few of my good friends, the two words became code for much more.

“Salmon run” became code for risky action that moved against spiritual mediocrity or apathy on campus. With those words, we called each other to greater levels of purity, especially when many peers were floating down the stream of sexual compromise. We prayed “salmon run” over each other when making radical decisions, like spending precious summer months on volunteer service or mission trips. With these words, we encouraged each other to go deeper in our walk with God; not taking the status quo as our norm.

That worked in back in college, but how about today?

Over New Year’s, I was with more than 200 young adults at re:TURN 2012, an MB Mission-sponsored conference. We spent two days collectively in the presence of Jesus. At 11:55 p.m. on Dec. 31, we gathered around the Lord’s Table to say goodbye to 2012. Looking around the room, I saw people ready to also say goodbye to status quo Christianity. I felt like yelling “Anyone up for a ‘salmon run’ in 2013?”

There is a growing sense in this generation that our church in North America is not quite what it could be. We’ve allowed things that grieve God to creep into our church culture, things like materialism, apathy, consumerism, busyness, or recreation. These little gods we quietly honour cause us to settle for second best in our faith. Before we know it, we’re meandering calmly downstream, believing that “go-with-the-flow” faith is the adventure of Jesus.

Where are the salmon among us, the leaders willing to swim against the flow of the majority? Where are the ones who long get back to the whitewater, the churning places where Jesus is building his church, healing the sick, and setting the oppressed free? Where are the ones willing to repent and turn from the subtle cultural sin that strangles and disillusions us corporately? There is nothing calm or meandering about that water.

The passionate risk-takers are out there. They are waiting to be summoned by a peer or a mentor, calling, “It’s time for a salmon run!” Maybe it’s you – what part are you being asked to play in our awakening?

Spirit of God, turn us around, may we give ourselves to everything you have for us.

—Sam Dick is short-term mission mobilizer for MB Mission, based in Abbotsford, B.C. He delivered a version of this message at re:TURN, and posted reflections at www.samdick.org/2013/01/salmon-run