What's New
6 reasons to attend the MWC Global Assembly...
One too many
Just one more
A safe place in Winnipleg
When the sent are sent away
Leading through the trauma of covid: part one...
Church of Lithuania supports Ukraine Christians
A mennonite heart for refugees
A great time for building relationships
Multiply announces new General Director
Home News This is Amazing Grace

Your great love will lead me through.
You are the peace in my troubled sea.

“I’ve been doing youth ministry for 10 years. Nothing could have prepared me for that day,” says Mike Olynyk of Tuesday, Nov. 1, 2016, when South Abbotsford Church (SAC) learned two girls from their youth group had been stabbed at Abbotsford Senior Secondary School.

Olynyk joined the family of the girl airlifted to Vancouver; she survived. Other SAC pastors stayed in Abbotsford with the family of 13-year-old Letisha Reimer – who was in critical condition. It wasn’t long before the doctor came out to say Letisha had succumbed to her injuries.

“Our pastors were all in,” says Olynyk. “They opened the church that night and rallied around the youth to pray and process together the initial shock. The elders and youth sponsors were there, pouring on love, providing space for youth to mourn and grieve.”

Their friends were harmed “in an environment where they were supposed to feel safe,” says Olynyk. The tragedy forced teens to face their own mortality for the first time. “They’re realizing there’s no safety in this world.”

The next day, the weekly hangout Olynyk runs in the middle school was packed with students: some were mourning, others needed a break.

I sing for all that you’ve done

For Thursday’s youth night, says Olynyk, “We called all the youth pastors in the area to ask, ‘Can you be on hand to pray?’” Ten pastors from Youth Unlimited and other churches came. “The Abbotsford community came together on this; those youth pastors being there showed the body of Christ.”

Olynyk led a conversation about the impact God had in Letisha’s life and how that can encourage us. He told the youth, “God has a thick skin: bring it to God.”

Out of that came the anthems.

They sang “This is Amazing Grace” from their youth retreat the previous weekend, the song whose lyrics Letisha and her friend had been 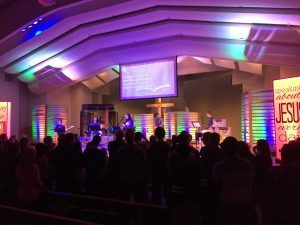 copying in the moments before the attack. When the worship team ended on “My Lighthouse,” the most energetic song from the retreat, something amazing happened.

“We had kids jumping up and down and praising God in the midst of their pain,” says Olynyk. “There was healing and a sense that ‘God takes me as I am, there’s crap in the world and God meets us in that.’”

On Friday, SAC had buses lined up to take students from Letisha’s high school to the church to process together. “Students from our youth group came to support the families,” says Olynyk. “Non-Christians were shocked to see students praising God with joy in the midst of such tragedy.”

In the early days after Letisha’s death, Olynyk set his own emotions aside to meet the needs of his youth group. At the B.C. MB pastor’s retreat, he had space to process with counsellors from Mercy Seat. Olynyk’s grief was compounded by his sister-in-law’s cancer diagnosis and his cousin’s death in the months before this tragedy.

Olynyk was able to pass that grace on to others. Mar. 3, 2017, when a 14-year-old Abbotsford boy died on a Mennonite Educational Institute (MEI) ski trip, Olynyk met with the boy’s youth pastor to pass on his experience. The day after the accident, the same group of local youth pastors that supported SAC gathered at MEI, staying for most of the day to talk and pray with hurting students.

That I would be set free

This summer, 18 students went on the​ SERVE mission ​trip that Letisha​ had been part of every year since its start. At a worship and memorial time on the beach, “We prayed and each student scooped a handful of sand into a bottle that read, ‘Forever in our hearts,’” says Olynyk. “The trip was healing; some students felt comfortable sharing for the first time since Nov. 1, 2016.”

May 28, 2017, much of SAC wasn’t in church; they were at the Run for Water, a charity race Letisha participated in for the past five years. The youth band played some of the same worship songs from her memorial, and many ran in her honour. The 10-km run raised $450,000 to provide clean water to 25,000 people and build a new school for 800 children in Freselem, Ethiopia, to be named after Letisha.

A verse that has continued to impact Olynyk and the youth group since the youth retreat is Ephesians 2:10: “we are God’s handiwork, created in Christ Jesus to do good works.” His ongoing prayer: “that students would see themselves as God sees them.”

Olynyk also prays, as his youth group comes to terms with the pain in the world, that they would be a family pointing each other to deeper relationship with God: “Heaven has already come down. Yes, it’s in the future, but God gives us a lot for today.”

South Abbotsford is still seeing new people from the community at youth events. “There’s a pilgrimage of sorts: people want to come to the place where Letisha was most alive.”

It came through clearly in the media coverage of SAC’s response to Letisha’s death that “Jesus is bigger than this,” says Olynyk.

“There’s a peace that passes our circumstances in Jesus.”