What's New
A FOCUS on Mission
Must Patience Be So Slow?
Harold Jantz: A Heart for the Mennonite Story
Lorlie Barkman: A Life of Creative Engagement
Last Days, First Days
Women in Ministry: Bertha Dyck
January Moment in Prayer “Holy Spirit—Fill Us!”
The Church as the Patient Body of Christ
Advent: Making Much of Jesus: Christmas Day
Advent: Making Much of Jesus: Fourth Advent
Home Life & Faithfeature articles Responding to cultural shifts in Quebec

Centrality of Jesus for evangelism in a postmodern culture 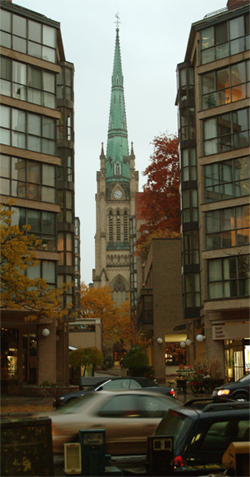 To the surprise of many, most of Quebec turned orange during the last federal election. Whatever the significance of this sudden political shift, it pales in comparison with the profound cultural transformation the province has undergone during the last decades. Once Catholic and traditional, the Québécois are now under the sway of a post-Christian culture.

This metamorphosis has created great challenges for the church. The rapid erosion of distinct Christian elements from Quebec’s cultural heritage means church activities and more generally what churches are about seem to become less and less intelligible. It is as if our culture is going digital, while the church keeps broadcasting analog.

Anabaptism, with its stress on the centrality of the life and teaching of Jesus, offers us a way to meet many of these challenges. If we pursue the transformation following Jesus entails, our communities may begin to embody a meaningful, Christ-like presence that will truly speak into the lives of our secular friends, co-workers, and neighbours.

But first, let’s say more about the onset of this new post-Christian context.

In Quebec, as in other societies where Catholicism was dominant, the church has imploded. Like a brush soaked with a powerful paint remover, secularism has liquefied and scrubbed away religion from people’s lives. As a result, the Catholic church, once towering over our collective existence, now stands in ruins: about two percent of the population attends church regularly and the average age of a priest is 79!

If Catholicism has been brought near the brink of oblivion, it is for one simple reason. The bulk of the population may have been in the church, but it was not by virtue of a real personal faith. Christianity was simply something handed down as part of a heritage, like the French language or our tendency for drastic political shifts. Jacques Grand’Maison, a well-known Catholic essayist, came down with this verdict: “The Québécois have never been evangelized.” So, when the culture turned toward secularism, this sociological form of Christianity didn’t stand a chance.

Dreaming of an evangelical exceptionalism

Now, those of us “sociological Catholics” who came to a personal faith in Jesus through the ministry of evangelical missionaries were convinced the demise of Catholicism was a sign it was not the true church. We even rejoiced at the crumbling of what we referred to as ‘‘Babylon.” (A joy perhaps not unlike the one some of you experienced when you saw what happened to the Bloc Québécois!)

We also foresaw a bright future for our movement. We were convinced that evangelicalism would conquer Quebec. But the rapid growth evangelical churches experienced in the ’70s and ’80s did not last. As a movement, we have more or less plateaued. But more worrisome, many churches have had great difficulty retaining their youth.

The tidal wave of secularism 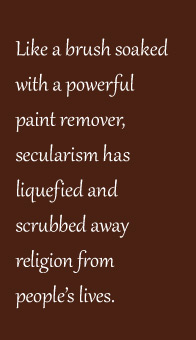 Not surprisingly, we find this difficult to talk about. After all, it was not meant to happen that way! We came out of a ‘‘sociological’’ religion and met Christ in the context of the welcoming embrace of the evangelical church. We’re befuddled that our experience is not reproduced in the lives of our children.

Some think time will solve the problem and a significant number of those who left will come back. But time alone will probably not suffice because most of those who have opted out did so as a result of a process of secularization.

In other words, they have acquired the same set of attitudes that led to the disintegration of Catholicism and that now defines the inner landscape of post-Christian cultures of the West. The changes these young adults went through as they marched toward adulthood were subtle, and therefore easily overlooked. Yet, these changes gradually brought them to a tipping point after which they started to sense and experience the world differently than we do.

As a result, a sizable portion of the rich and vibrant vocabulary of ways, symbols, and concepts – that spoke so powerfully to people like me, and through which we keep expressing who we are – has become something akin to a dead language, like Latin. Beautiful in its own right, but unable to convey the gospel to them.

Me, here and now

Let’s look more closely at secularism to better understand some of the changes it may require from us. For most Québécois, culture shapes their perceptions and sensitivities in such a way that life is mostly preoccupied with the here and now. This concentration on the concrete and immediate also comes with a sense that whatever meaning there is to life has to be deeply connected to what one can directly touch, experience, or observe.

Granted, most people continue to “believe’’ in an invisible dimension or invisible plane. But they are not able to entrust it with any real say in the crucial questions of identity or the meaning of life.
‘‘God,’’ or whatever people stock the invisible world with, becomes simply one among different pet theories any sane person is expected to have about what may or may not undergird reality. But these theories carry very little existential weight. They are, for the most part, simple accessories.

The breakdown in communication

The disappearance of the reflex that had people spontaneously believe their lives found meaning in a transcendent plane of reality has all kinds of ramifications. Significantly for Christians, it’s almost impossible for people to really get what we’re alluding to when, for example, we talk about “the Lord” or about “accepting Christ as Saviour.” Similarly, the concept of eternal life – at one level, easily grasped – has become inert, unable to exert any kind of pull.

This apparent breakdown of communication is only a symptom telling us the subtle and complex web of perceptions and attitudes culture instills in people has changed.

What are we to do now? We cannot reconfigure people’s predispositions and sensitivities. Au contraire, we have to accept this secularized culture, discern where and how the power of sin manifests itself in it, and find out how to carry out our mission in this context.

One way we can find what God is calling us to do is to ask ourselves the following question: in a culture that has turned its back on the transcendent/invisible realm, what will indicate that someone is searching for God or is open to God?

In other words, when people unknowingly seek God (because in their culture, God, at an existential level, has been written off), how will they look for him? What shape or form will their search take?

This cannot be answered with great certainty. Yet, some of us have come to believe that the quest for God in a secularized culture will often manifest itself by a quest for justice and a desire to contribute to the well-being of the larger community. Let’s call this the ‘‘immanent spirituality’’ of the secular age.

Some readers may find this answer surprising because we often think people who are predisposed to pay attention to the gospel are those who have an interest in what is usually broadly called “spirituality.” But my experience indicates the spiritual quest of these people often amounts to not much more than an “I” trying to beautify its inner life with something more uplifting than the crass materialism that pervades everything.

The movement of decentring, a profound, existential acknowledgement that one’s life ought to serve a large purpose, is more often found among those who get involved in social action and try to make a difference. So even though, from a certain angle, these people may seem allergic to the Good News, the secularized “seekers” have perhaps unknowingly begun the process of conversion by refusing to completely buy in to the spirit of the age and its worship of the self.

Back to square one

Let us conclude. We are a people sent by God. Our mission is simple: individually and collectively, to embody who God is and to facilitate our fellow humans’ journey back to God, so they experience the fullness of salvation found only in Jesus Christ. How, then, can we achieve our mission in a secularized culture?

This is where the centrality of Jesus’ life ought to be brought to bear. Menno Simons wrote that “true evangelical faith cannot lie dormant. It clothes the naked, it feeds the hungry, it comforts the sorrowful, it shelters the destitute, it serves those that harm it, it binds up that which is wounded, it has become all things to all people.”

In other words, true faith means allowing the Holy Spirit to reproduce in our individual and communal existence the life of Jesus.

Evangelism ought then to begin by something that can be called “re-incarnation”: like God did through Jesus, we begin by being with people, trying to understand them and connect with them. Then we start to serve them in accordance with their needs and in keeping with our resources and abilities.

Note that this process should be a two-way street. The dignity of those we have been sent to serve and our belief that they bear the image of God dictate that we come alongside them not only to give but also to receive, expecting God to use them to help us become better
followers of Jesus.

When a community of believers humbly and discretely starts down that path, it will inevitably attract the attention of the seekers described earlier. They will see Christian communities active in service as allies or natural partners. Many of these seekers have a desire to connect with others who have joined the “resistance” – the movement of those resisting the mindless narcissism and hedonism that pervades contemporary mass culture.

Through friendship and honest conversations, the Spirit of God will help these fellow members of the resistance discover the source of what had been stirring in their souls. They will gradually and mysteriously come to understand and believe that their vision for a more just world was the faint whisper of the Spirit of God. A God who so loved the world that he gave his Son, that whoever believes in him shall not perish but have eternal life.

Pleasure to read you Eric. I recall a conversation with Jacque Marcoux in about 1988 that that expressed the same patterns of Quebec society.