What's New
Abortion, the image of God, and faithful witness...
Choosing motherhood: The sacrifice of honouring life
MWC Assembly small but full of joy
Bad back doesn’t hold back MDS volunteer
Transition in CCMBC National Faith and Life Leadership
Leading through the trauma of covid: Part three...
The church distracted: When the main thing is...
Remote wilderness rescue turns into service with MDS...
How open is your mind?
Following Jesus together across barriers
Home Arts & Culture A unified global church starts at home 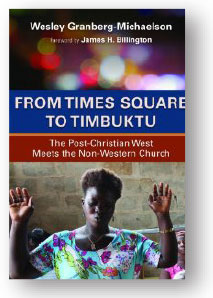 From Times Square to Timbuktu: The Post-Christian West Meets the Non-Western Church

A common theme emerges as I listen to the stories of families who have been members of the Mennonite Brethren church in Canada for many years. These immigrants who fled persecution and war in Eastern/Central Europe brought a vibrant Anabaptist faith and a unique practice of Christianity that has been passed down the generations and now has shaped me – a child of immigrants from Asia. I grew up as a committed Anglican, was exposed to a variety of expressions of Christian faith in university through the inter-denominational Inter-Varsity Christian Fellowship, and am now MB. I have been deeply shaped by the blessing of an ecumenical faith experience. But that experience has been mostly of a Western Christianity from the Global North.

In the last 100 years, the geographic, statistical centre of Christianity has shifted from the North to the South with the dramatic increase of Christ followers in Asia, Africa and South America. “The world today is witnessing a post-Western awakening of Christianity,” a shift as significant as the dynamic movement of the Christian faith from Jerusalem to Antioch in the first century. As migration patterns bring many people from these vibrant, non-Western churches to our communities, we have an opportunity to receive a gift from God that will encourage and enliven us, and forever change the face of Western Christianity.

Author Wesley Granberg-Michaelson was head of the Reformed Church in America 1994–2011, and was previously the director of Church and Society for the World Council of Churches (WCC) in Geneva. With his experience as a managing editor for Sojourners magazine and eight years on the staff of a U.S. senator, Granberg-Michaelson is no stranger to the world of influential politics both inside and outside the church. He has been involved with ecumenical movements for many years and has a deep desire to bridge across denominational lines and to seek unity among diverse Christians.

In a well-researched, accessible way, Granberg-Michaelson nurtures a biblical vision of the global church in all its diversity becoming unified to bring glory to God. He describes the pilgrimage of the Christian faith from its earliest beginnings, a journey that required both cultural shifts and local incarnation as it expanded geographically.

From a small movement that started in Jerusalem, the practice and understanding of the Christian faith had to change when it extended to the Gentile city of Antioch. The author succinctly traces how these changes have continued over the 2000-year, diverse development of Christianity as it stretched out to encompass the globe.

Drawing from personal experience, demographic trends, church history, missiology and ecclesiology, Granberg-Michaelson effectively makes his case but never overwhelms the reader. Although the book is strongly directed toward the church in the U.S. and many of the “Western” demographics cited are U.S. statistics, the majority of his anecdotes derive from Granberg-Michaelson’s extensive global experience. However, I wondered how a Canadian perspective would affect the demographic picture and whether his observations are transferable to a Canadian context. Regardless, his survey of the movement of global Christianity with its implications for the Western church is convincing.

This book was released shortly before the 2013 assembly of the World Council of Churches in Busan, South Korea. In one section, Granberg-Michaelson speaks directly to the WCC and other organizations (e.g., the Global Christian Forum) as he addresses the history of global ecumenical efforts and calls for new ways of being in the future.

It was instructive to read about the work of these global associations and the powerful role they can have in unifying Christian witness. Although the Canadian Conference of MB Churches is not a member of the WCC, it joins with the global church through its interactions with ICOMB and through Mennonite Central Committee and Mennonite World Conference.

But this vision of a unified global church starts at home in the life of the local congregation. Migration patterns have brought many faithful believers from non-Western churches to our doorstep. These believers bring a unique blend of enculturated, contextualized Christian practice; evangelical theology; Pentecostal Spirit-filled style; and social justice commitments. Many gather in ethnic, culture-specific churches in Canada and may even rent our sanctuaries after we have gone home for Sunday lunch.

With wisdom and gentleness, Granberg-Michaelson calls the Western church to embrace those God is bringing to us and offers insightful suggestions to guide our local pilgrimage with newcomers from the global church.

Vision for newcomers
The book presents a vision that challenged me to look beyond personal spirituality and individual behaviours to consider how God is at work globally through his people. In the midst of a declining Christian ethic and witness in our context, the author stirs my hope for the Canadian church – that we would be invigorated through embracing those who have migrated from the Global South. He inspires me to deepen relationships with newcomers within my congregation, learn from them and allow Jesus to change us together. The author calls me to seek out those beyond our walls who have journeyed to our shores in search of a brighter future, and to walk with them into the future that Jesus has for a renewed Canadian church.

This will require generous hospitality, profound humility and a willingness to let go of “the ways things are” – both personally and within our church leadership structures. We will have to learn new ways of being together in order to receive the fullness of what God desires for us. It will require us to grow in intercultural intelligence so we can move beyond multicultural communities where there is simply a diversity of people present, to intercultural churches where a true oneness of God’s people is an inspiring witness to the world.

Granberg-Michaelson makes a strongly supported case for the future of Western Christianity being shaped by Christians from the Global South. “How Western Christianity responds will shape the global Christian witness” and is crucial to the fulfillment of God’s vision of the church being his “witnesses in Jerusalem, and in all Judea and Samaria, and to the ends of the earth” (Acts 1:8).

The MB church in Canada was birthed by the migration of newcomers bringing with them a unique, rich Christian faith. I look forward to the transformation that God will do in our communities as we embrace a new generation of pilgrims.

Paul Chin, an engineer by day and an intercultural consultant by night, is a leadership board member of Waterloo (Ont.) MB Church.

Winds of the Spirit in Brazil

From the West to the Global South and...

Who are true Anabaptists today?

The church Christ died for