What's New
Delete or not to delete, that is the...
Believers bring water for drought baptism
Encouragement to those in the arena
Keeping attention and making an impact: A few...
Open hands to reconciliation
From the editor
Approaching truth and reconciliation with love in our...
MB Seminary offers new MA in Transformational Leadership...
Multiply August Ukraine Updates
Book Review of Return Stroke: Essays & Memoir...
Home Arts & Culture Who are true Anabaptists today?

Who are true Anabaptists today? 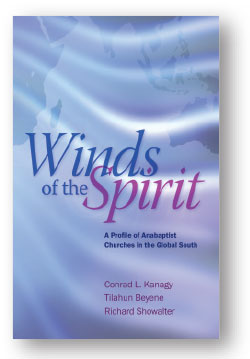 Winds of the Spirit: A Profile of Anabaptist Churches in the Global South
Conrad L. Kanagy, Tilahun Beyene, and Richard Showalter


“This is an exceptionally important book.” So says Philip Jenkins, author and authority on global trends in Christianity. As a student of the Mennonite Brethren church movement, I tend to agree. Winds of the Spirit is the result of a very large survey (over 18,000 responses) of 12 national conferences of churches within the Mennonite Church family. “There really is nothing like this book” (Jenkins – in the foreword).

The authors wanted to know what makes the Mennonite church of the global south tick. Are there factors in common with one another and with other groups in the global South? They combine interest in sociology and mission. Each chapter provides helpful historical, theological and theoretical information as background for interpreting the data.

Winds of the Spirit is not driven by the question “what can we learn from the South so we can grow again in the North?” It’s focused rather on the character issue – who are “true” Anabaptists and what are they like? And, what does that say to us today?

The major point is that the suffering church of the Global South today resembles most closely that of the 16th century Anabaptists and Early Church; and that this is the character of Pentecostalism: “Pentecostalism is the carrier of Anabaptist convictions in Asia and Africa” assert the authors.

A sample of the assertions that may challenge readers in the Global North:

Winds of the Spirit points to some deep issues that separate the North from the South, though these are not uniformly or exclusively North-South. There are problems and challenges in the South and positive signs in the North. While there may be some controversy inherent in these assertions and observations, this book needs to be taken seriously by leaders in the church.