What's New
Through the conflict, life carries on in Ukraine
A FOCUS on Mission
Must Patience Be So Slow?
Harold Jantz: A Heart for the Mennonite Story
Lorlie Barkman: A Life of Creative Engagement
Last Days, First Days
Women in Ministry: Bertha Dyck
January Moment in Prayer “Holy Spirit—Fill Us!”
The Church as the Patient Body of Christ
Advent: Making Much of Jesus: Christmas Day
Home News Quebec convention 2013

In the opening meditation of the Quebec conference of Mennonite Brethren Churches (AEFMQ) convention, Apr. 13, host pastor David Manafo (Westside Gathering) said Christ-followers have the identity of children of love and children of light (Ephesians 5:1–2, 8).

“In Christ, we don’t move into a new environment; we move into being new people,” said Manafo.

We don’t shift from being in darkness to light, but of darkness to light, he said. As children of Christ himself, how might we live differently if we remember that “every person we lock eyes with longs for that identity shift?” Manafo challenged.

The gathering at Westview Bible Church (rented for the day’s proceedings) received the covering of God’s presence, invoked in French, English, Spanish, Khmer, and Indonesian, with open arms. 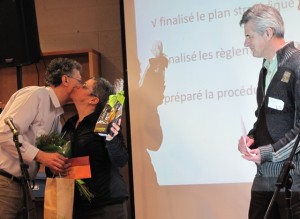 Outgoing AEFMQ board president Ginette Bastien likened the conference to a car – a Fiat: “a little car, with panache!” Driven by a small engine (the board), it established bylaws approved by convention vote, and presented a 5-year strategic plan responding to the essential questions of “which services to offer to what people in which places in what order of priority.”

AEFMQ executive director Gilles Dextraze called on churches to incorporate individually, according to the advice of Conseil Québécois d’Organismes Chrétiens, a cognate organization to CCCC. He cited advantages of having a legal existence before government, including an identity not dependent on the government’s approval of the conference, and increased profile and strength as a religious organization.

Farewells and welcomes were observed on the board and in churches.

Cheers greeted the unveiling of the C2C spring brochure translated into French.

Despite some unmet giving expectations, and aided by transfers from CCMBC reserves, Dextraze presented a balanced budget for 2013: $153,600 for AEFMQ, $181,970 for Horizon Quebec, and $314,650 (mostly from national funds) for Réseau C2C Québec.

Horizon Quebec is in its fifth year as an initiative to strengthen and support healthy development of churches. Provincial conference minister Stéphane Rhéaume administers the ReFocusing process to build the churches of the future today, and facilitates four pastor luncheons for training and encouragement over the year. Canadian conference funds are committed to support the program until 2014. 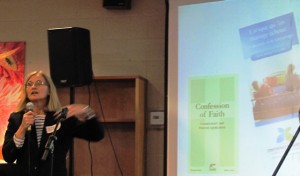 Jean Bieri reported that Le Lien is eager to publish more material from francophone MB writers, and the board of faith and life is pleased to announce the French-language release of the BFL pamphlets on baptism, homosexuality, and divorce and remarriage. Work is also underway to translate the Confession of Faith pastoral commentary and application into French.

The BFL also shepherded development of a new Montreal fellowship, L’Essentiel, a dialogue-based approach to church, meeting Sunday mornings in the facilities at ETEM.

President Kristen Corrigan likened École de Théologie Évangélique de Montréal (ETEM) to SuperMario: meeting and conquering obstacles. Funding from CCMBC and much greater revenue per course from the accreditation relationship with Laval University have ameliorated the financial difficulties; a new student recruitment system is having an impact on the number and variety of students; and empty rental space in the building is now filled by fellow ministries MCC Quebec and FAREL (a Reformed Bible college). Bastien shared about a young woman from her church who has grown more confident and discerning in her faith through her studies in the new 19/24 student discipleship program. 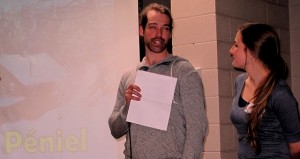 MCC Quebec director Muriel Queval reported on the agency’s ongoing activities and urged people to volunteer at the Truth and Reconciliation national event, Apr. 24–27. It’s an opportunity to be a Christian presence, to hear an Aboriginal perspective, and to build Aboriginal-church relationships: “there is work to do,” she said.

Dear Christian Friends
I am director of Western Tract Mission, Saskatoon. Since 1967 I have prayed for Quebec every Saturday. Our mission want to place a “There is Hope” (see on website, English) 16 page Gospel booklet with 5 born again French Quebec testimonies, into every home in Quebec. (will need more then 5 to choose from) We have covered SK. NFL, PBI, and most of NS. In NB. are a lot of French our aim is to do NB. next. (It got away on me.) Would you dear folks have French testimonies that WTM could use for this booklet or know where we can get some? Blessings: Arnold Stobbe