What's New
Through the conflict, life carries on in Ukraine
A FOCUS on Mission
Must Patience Be So Slow?
Harold Jantz: A Heart for the Mennonite Story
Lorlie Barkman: A Life of Creative Engagement
Last Days, First Days
Women in Ministry: Bertha Dyck
January Moment in Prayer “Holy Spirit—Fill Us!”
The Church as the Patient Body of Christ
Advent: Making Much of Jesus: Christmas Day
Home News Politics professor is Christian camp’s biggest advocate 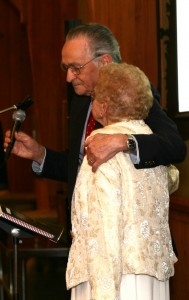 You can’t get very far into conversation with John Redekop before politics comes up. That, and his even greater passion – Christian camping, especially B.C.’s Stillwood Camp and Conference Centre.

He has other interests, of course. Redekop is a columnist and author; he loves writing, especially about politics. He may be most familiar to Canadian Mennonite Brethren through his “Personal Opinion” column in the MB Herald 1964–2003.

He is a teacher, once in the public school system, then for decades a university professor of political science. Today, Redekop watches many of his students’ careers with great satisfaction.

And he has served on many boards, including as moderator of the Canadian MB conference, and, of course, on Stillwood’s board. 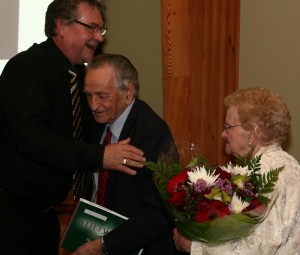 Some 200 supporters honoured Redekop at a dinner at the camp Apr. 27, 2014. His roots go back to its beginning; some of his handwritten minutes from the first meeting Oct. 2, 1958, are included in the 50th anniversary celebration book.

While teaching high school in Langley, B.C., Redekop served on a committee to “form a camp society,” a group that ultimately purchased Stillwood’s property near Cultus Lake, south of Chilliwack, B.C. Redekop was secretary of that founding group.

Begun as Columbia Bible Camp, Stillwood’s first rudimentary buildings were constructed by volunteers. Redekop harkens back to early board meetings, when after business was done, everyone would go for their tools. The tradition carries on in today’s comfortable, modern facilities; volunteer labour did much of the work.

Over the years, the camp board purchased adjoining lands and broadened the scope of its programs to year-round operation. It now has an annual budget of more than $3 million and serves thousands of visitors of all ages.

Shortly after Columbia Bible Camp started, Redekop’s academic career took him away from B.C.; he earned his PhD at the University of Washington and taught for a time in California. He and wife Doris settled in Ontario where he became professor of political science at Waterloo Lutheran University (now Wilfrid Laurier).

Redekop was always fascinated by politics. He became an avid reader of the political column, “Under the Peace Tower” in Country Guide around age eight. “I don’t know why, but I remember political data far better than other kinds of data.” he says.

Redekop looks on government and politics as “God’s other arena.” In fact, that’s the title of his ninth book, on which he is now working. Book number eight, The Tory Book, a compilation, should be published soon. But his best-known book is still Politics Under God, a work translated into French and Spanish.

The magnetism of this “other arena” brought Redekop into early involvement with the Evangelical Fellowship of Canada, which is celebrating its 50th anniversary this year. He was vice president of EFC 1985–91, then served as president until 1993. He was the first chair of the EFC’s Social Action committee: “I established it, and it’s still going.”

In 1994, he retired early from Wilfrid Laurier to return to B.C. and teach part-time at Trinity Western University, Langley, B.C., where he retains his status as adjunct professor. He expresses gratitude that God has provided so many opportunities to share his political thoughts, both in print and as a professor.

Phase II for the future 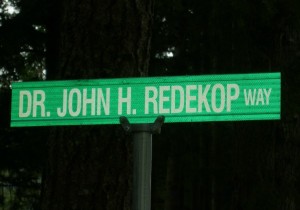 Stillwood names a street for a veteran board member. PHOTO: Harry Edwards

Proximity brought Redekop back to his other major passion. He was quickly recruited back to Stillwood. “[Executive director] Henry Esau twisted my arm…. I never planned to stay this long. I am still as busy as I ever was. And I am not about to retire.” (He is 81, “but most days 71. On especially good days, I am 61.”)

Summer camping is changing, and Redekop wants to be part of Stillwood’s Phase II project, designed to embrace those changes. He says families are smaller now, and parents want to vacation with their kids during summer. New adult-oriented facilities will allow parents to share summertime Christian camping experiences with their children. He is actively fundraising now to make that happen.

Redekop’s fundraising activities are legendary. His diligent work over the years to find donors to pay for Stillwood’s development has taught him the importance of trust and building relationships with donors.

Redekop has developed a three-hour seminar on fundraising which he teaches on request. He encourages donors to give while they are alive, not as a bequest, so they can take joy in seeing their money at work in the kingdom.

As Stillwood has grown, widened its ministry and modernized its facilities, there were new cabins, lodges, a dining hall, swimming pool, gym with meeting rooms, “hospital” and administrative centre to build – so many projects!

In the last two decades, Redekop can count 52 projects – “often four or five at a time,” he told the Apr. 27 dinner audience. His fundraising efforts brought in some $11 million to those 52 projects.

Redekop is quick to say that his greatest life satisfaction comes from Stillwood. “When I see hundreds of kids make decisions for Christ at camp,” he says, “there is nothing like it.” One evening at the campfire amphitheatre, 95 campers made a decision for Christ. One accepted Christ with tears. “He cried. I cried,” said Redekop.

“I am deeply grateful to God to allow me to play this role.”

Many years ago i had the opportunity to take several courses from Dr Redekop at Wilfred Laurier University in the political science field.I cannot express enough gratitude to John for his unbiased perceptive and insightful courses without ever really exposing political bias by him in the courses.It was a priviledge to have had him as a professor.Ironically i pulled one of his early books from a shelf on Hargis who was quite an interesting minister with a right wing bent and i was reflecting on the populism aspect of our society and the American experience with Trump and trying to see any parallels to the Hargis writings.I would dearly like to reconnect with John to express my gratitude for his wonderful courses and see what his opinion on Hargis/Trump paralells etc.Thank you Dr Redekop for being the best.William Eckenswiller