What's New
Believers bring water for drought baptism
Encouragement to those in the arena
Keeping attention and making an impact: A few...
Open hands to reconciliation
From the editor
Approaching truth and reconciliation with love in our...
MB Seminary offers new MA in Transformational Leadership...
Multiply August Ukraine Updates
Book Review of Return Stroke: Essays & Memoir...
The wake I make
Home MB HeraldHomepage Part of the family 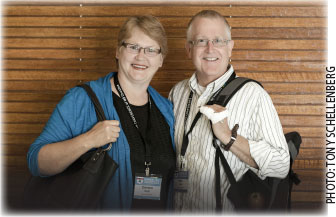 “An anniversary is about the people around you,” says Wes Dahl, pastor at South Langley (B.C.) MB Church. And there were plenty of people around him and his wife Doreen at Gathering 2012 in Winnipeg, as they celebrated 27 years of marriage on July 13.

They share the date with one of their sons’ birthdays, and often with professional duties such as attending CCMBC biennial conferences or officiating at weddings, so the Dahls are accustomed to marking their anniversary amid other events. “You wind up doing things together in the place of celebration,” says Wes, who has always felt it important to prioritize ministry.

“It’s how you spend [a special day] together, not where you spend it.” They observed their anniversary with MBs from across Canada – sharing a celebratory July 13 supper in Manitoba with delegates from Quebec, Saskatchewan, and Alberta.

Wes has pastored South Langley since 1996, and Doreen, a stay-at-home mom of four boys (three in post-secondary studies or the workforce, one in high school), came on staff as administrator in 2008. “It seemed natural to make the conference important,” Wes says. “I love the sense of where we [as MBs] want to go. How we get there is something we wrestle with, but [it was a good] reminder we’re here for this mission.”