What's New
A FOCUS on Mission
Must Patience Be So Slow?
Harold Jantz: A Heart for the Mennonite Story
Lorlie Barkman: A Life of Creative Engagement
Last Days, First Days
Women in Ministry: Bertha Dyck
January Moment in Prayer “Holy Spirit—Fill Us!”
The Church as the Patient Body of Christ
Advent: Making Much of Jesus: Christmas Day
Advent: Making Much of Jesus: Fourth Advent
Home MB HeraldHomepage PA 2015 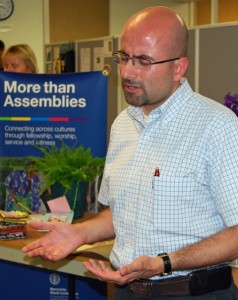 Amid growing anticipation and excitement about the Mennonite World Conference Assembly (PA 2015) to be held in Harrisburg, Pennsylvania July 21-26, 2015, a number of questions keep surfacing within North American churches. MWC General Secretary, César García of Bogotá, Colombia, shares his thoughts and answers to questions being talked about in hallways and over dinner tables.

Should we really come to PA 2015? I hear they don’t want too many North Americans there. Will there be enough internationals for this to be a truly global event?

García: At Mennonite World Conference (MWC) Assemblies, the people of the hosting country always outnumber their guests. It was true in India, in Zimbabwe, and in Paraguay. Those who live in the host country know there’s a rich feast to experience, and they don’t want to miss it.

It’s also a chance for the various Anabaptist groups from within the hosting country (and continent) to work and worship together. This will include not only the host churches (Mennonite, Mennonite Brethren, Brethren in Christ, Conservative Mennonite Conference), but also newer immigrant churches (for example Vietnamese, Ethiopian and Korean congregations), which are firmly planted and growing in strength and numbers in the United States and Canada.

All of these MWC members based in North America will be at PA 2015, fully participating. You’ll have them as friends and resources long after your guests have gone home. Why not build your futures together?

So, please don’t hold back. You are ALL absolutely welcome.

And, yes, there will be enough internationals for this to be a truly global event. Registration so far shows strong enthusiasm. 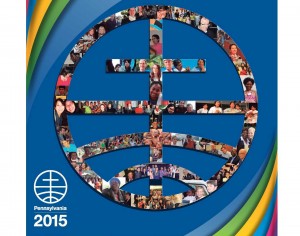 Why have the event in the U.S. with the visa issue? What is being done about ensuring that our sisters and brothers from the Global South can get visas?

García: We learned something from the Zimbabweans when they invited all of us to their country for the MWC Assembly in 2003. They had worrisome food and fuel shortages. Inflation was out of control. Daily life was a major struggle for many church members.

But they wanted to share what they had – and they needed to experience the support of their sisters and brothers from around the world. So they stockpiled food and fuel for months before the Assembly. And they set up a Prayer Network throughout their country, and they prayed vigorously.

Mennonites in the U.S. are saying, “We humbly acknowledge that we live in a deeply fearful society and that our government is preoccupied with security. But we need the presence of our faith family with us. We believe they can help us be more faithful if they spend a week in our country.

“We have established a Visa Task Force to work carefully with this issue. And we’ve called a Prayer Network into being so that together we can ask God for guidance, hope and strength as hosts of this global gathering.”

All countries have problems, but MWC goes where its people are, despite the difficulties. We all need the support of our faith family.

Why is the registration cost so high for PA 2015?

García: “Global North pricing” and “Global South pricing” is the way in which MWC recognizes the economic differences in our global family. MWC uses the principle of each paying their “Fair Share” – based on their country of citizenship – when calculating how much persons should pay to attend PA 2015.

It is not a perfect system. MWC’s goal is to distribute costs as evenly as possible around the world, so that it is not a heavier burden proportionately in one place than in another.

Why does PA 2015 include two “youth” events, and one of them is not even for youth? Why didn’t MWC change the name of the young adult event so it wouldn’t be so confusing?

García: North Americans are simply fitting into a tradition which made sense when it was begun by MWC and still makes sense in many places in the world.

The Global Youth Summit was created for persons aged 18 to 30. It began in Zimbabwe in 2003 with more than 220 registrants and happened again in Paraguay in 2009 with more than 700. It is a movement that is growing. More than 1000 registrants are expected to attend the GYS in PA.

There will be a special program for youth 12–17 every day from 10:15 a.m. to 12:15 p.m. In the afternoons, youth will be able to choose from workshops with a special focus on youth, sports, games and fun, afternoon tours, service opportunities and the Global Church Village & Stage.

Each day will start and end including everyone – in the morning with singing with an international choir, and in the evening with a worship service that will include participation from all continents.

García: We hope that North Americans will feel called to join this global experience. Yes, it does involve committing time and money, but we believe this is a rare opportunity to become involved in a spiritual experience that will be truly transformative.

Are North Americans really so busy that they can’t set aside 5½ days to spend time worshiping and fellowshipping and sharing about their faith-lives with sisters and brothers who live faithfully in many parts of the world?

North Americans are being offered a chance to practice true hospitality by sharing life with our global faith family. What’s more important than participating wholeheartedly and seeing what we can learn?

And why not include children and young people so that they have an indelible experience of life in God’s rich community, which could shape their understanding of church for the rest of their lives?

What is Mennonite World Conference? If it is more than a once-every-six-years conference, why is it called a “conference”?

García: Mennonite World Conference began as an event, a single meeting in 1925, when a relatively small group of European and North American Mennonites planned a “conference” to celebrate the 400th anniversary of the founding of Anabaptism in Switzerland in 1525. (The Mennonite world at that time was largely confined to Europe and North America.)

Other Mennonite World Conferences followed, being held about every five or six years, often to celebrate an historical occasion, and over time, to consider themes of interest and concern to Mennonites as a whole. Fellowship and support for each other became increasingly important, although MWC has never had the authority to control or impose doctrine or practice on its members.

The word “conference” accurately described the activities of these early get-togethers. And the name has stuck, although there is periodic discussion about using the term “communion” instead of “conference.”

Over the years, as fellowships began to form around the world, MWC began to recognize ways in which national churches could become resources to each other. MWC began to develop programs that are year-round and ongoing to bring the global family into greater relationship with each other.

Today, in addition to its global Assemblies, MWC sponsors World Fellowship Sunday, nurtures solidarity and networking among its member churches, publishes periodicals, encourages the publishing of the Global Anabaptist Shelf of Literature, includes Commissions who support the faith life of MWC member churches, and much more. All of this contributes to our becoming a global communion.

As the founder of MWC said 90 years ago, “We are stronger when we are together.” In the midst of persecution and suffering, MWC brings hope to a world that needs to see that in Christ, it is possible to find an interdependent, multicultural community that loves and serves in the way of Jesus.

For more information about PA 2015, the next Mennonite World Conference Assembly, to be held July 21–26, 2015, at the Farm Show Complex in Harrisburg, Pennsylvania, go to www.mwc-cmm.org/pa2015.

Overview: Walking with God and each other

Mukawa calls for reconciliation with God and others

PA 2015 opens with celebration, call to walk together

Watch the sessions online and read articles and blogs on the many activities of Assembly 16 here.