What's New
A FOCUS on Mission
Must Patience Be So Slow?
Harold Jantz: A Heart for the Mennonite Story
Lorlie Barkman: A Life of Creative Engagement
Last Days, First Days
Women in Ministry: Bertha Dyck
January Moment in Prayer “Holy Spirit—Fill Us!”
The Church as the Patient Body of Christ
Advent: Making Much of Jesus: Christmas Day
Advent: Making Much of Jesus: Fourth Advent
Home News Mennonite World Conference PA 2015 opens with celebration, call for walking together 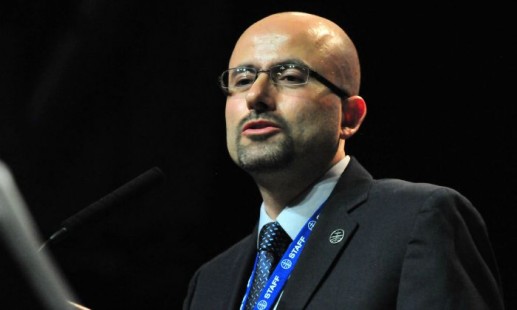 Picking up on the assembly theme, MWC general secretary César García called listeners to join with others and—together—walk with God. (Photo by Dale Gehman)

The 16th Mennonite World Conference (MWC) Assembly opened July 21, 2015, in Harrisburg, Pa., with a parade of Mennonites from across the globe, with confession of past treatment of Native Americans in Pennsylvania, with music and with calls for walking with God together.

A group of Native Americans from Pennsylvania marched in, led by Barry E. Lee drumming and singing. Jessica McPherson and Lee recounted some of the history of aboriginal peoples in Pennsylvania losing their land to whites. Mennonites later profited from this confiscation of land. In a ceremony in 2010, aboriginal representatives offered forgiveness to Mennonites who had confessed their regret for how their ancestors had treated aboriginal peoples. Lee said, “We invite you in peace; let’s move on together.”

Representatives of the four hosting Anabaptist conferences—Mennonite Church USA, U.S. Mennonite Brethren, Brethren in Christ Church in the U.S., and Conservative Mennonite Conference—also welcomed the thousands of attendees. More than 7,200 people from 56 countries had registered for the assembly.

Danisa Ndlovu of Zimbabwe, president of MWC since 2009, called this assembly “an exciting moment,” the result of many prayers offered worldwide.

“We live in a time of great upheaval and change,” he said. Drawing freely from the book of Revelation, Ndlovu said, “The urgent need of our world today is for [our church] to be one body from many nations.”

“Walking with God,” the assembly theme, said Ndlovu, calls us to examine our relationship with God, our lifestyles, and to test and approve God’s will. “Nothing is more beautiful than God’s people walking with God in harmony,” he said.

César García of Colombia, MWC general secretary, presented the sermon, based on Luke 24:13-35. He recalled himself at age 17, a soldier in the Colombian army. Military service was obligatory, and he did not have Anabaptist convictions at that time, yet he called himself a Christian, even though it cost him a beating from his captain.

Is it possible, García asked, to walk together if we are not in agreement? He noted that in Luke 24, the disciples did not agree with each other and carried doubts following Jesus’ death.

García quoted an African proverb: “If you want to go quickly, go alone. If you want to go far, walk together.” “Walking,” he said, referring to the assembly theme, means a continuous action, leaving behind our fears and opening our hearts, and being involved in the journey. “With God” speaks of communion with God and with each other, Garcia said. We will have moments of doubt and conflicts and prefer to walk by ourselves. But “we will recognize our need to walk together,” he said.

He was able to confess to his captain that he was a Christian and could not kill, he said, because four others his age had already confessed the same and been beaten. “I had found a new community with these four friends,” he said. And, with them, he could walk with God.

—Gordon Houser, The Mennonite, for Meetinghouse, an association of Anabaptist editors.