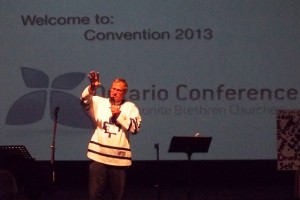 Host pastor Herm Plett of Mountain Park Church: “We don’t go to church: we are the church.”

The 82nd annual convention of the Ontario Conference of MB Churches (ONMB) at Mountain Park Church, Niagara Falls, Ont., experienced “a welling up of God’s presence and his Spirit in this place,” said ONMB executive director Ed Willms.

“I believe God is doing this new thing among us,” said Willms, commenting on the previous year’s convention theme, See I am Doing a New Thing” (Isaiah 43:19). “I have been given a front-row seat to what God is doing in our churches across the province,” he said. “Despite our brokenness, sin, and pain, God has not given up on us.”

Said Karen West, board chair and convention moderator, “Tomorrow, we will enter into decision making, but [Friday night] is about worship. How we worship tonight will carry over into our business tomorrow.”

Do you want to be well? 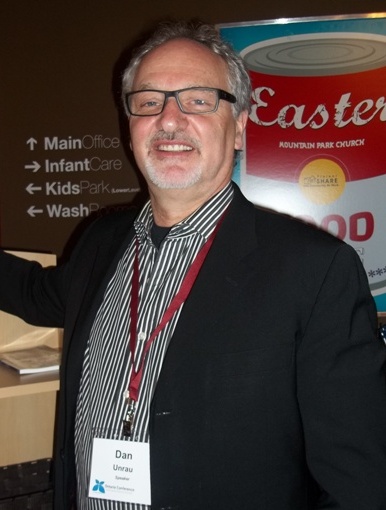 “Everyone needs a Nathan,” said Unrau, speaking on the “disturbing but liberating story” of David and Bathsheba in 2 Samuel 11, 12. “Humans are fallen beings. We mess up. We sin. Everyone needs a Nathan – someone who will get in our face, hold up a mirror, and tell us how we have behaved despicably. We are all, at times, ‘little Davids’ pretending to be big. And we need a Nathan.

“Becoming part of the church means giving others the right to mind your business.” Unrau paused and peered into the group: “Do the Ontario churches need a Nathan?”

To answering chuckles and murmurs, he pressed, “Do you want to be well?” and left a challenge for delegates to own their past, admit sins, and commit them no more.

At the conclusion of Friday evening, Willms encouraged members to pause and search their hearts as the board of directors prepared to serve communion to the pastors and delegates. Willms encouraged people to make peace with one another before participating in communion, promising his and the board’s availability for dialogue prior to receiving communion.

This spirit of openness and humility contributed to the evening’s reverent atmosphere.

Unrau’s message on Saturday morning, from John 4, modelled love in both directions. When Jesus spoke with the woman at the well, he broke societal rules. “Jesus is radical – above and beyond the usual definition of the word,” said Unrau. Ontario churches need to embrace this “story of radical love. We need to surrender traditional practises and norms for the sake of pouring out living water. For the sake of loving in both directions.”

Willms encouraged attendees to peruse the Journey Wall created by pastors and leaders with ReFocusing facilitator Dave Jackson at May 2012’s retreat. The display marked the ups and downs of the past 82 years in Ontario MB churches.

A reoccurring theme of partnership surfaced in the ministry reports, supporting Willms’ challenge to the more than 170 delegates to “lower the MB flag and raise the flag of Jesus.” Many presenters positively referenced this challenge to partner with other denominations and organizations to better reach Canada and the far corners of the world with the good news of Christ. 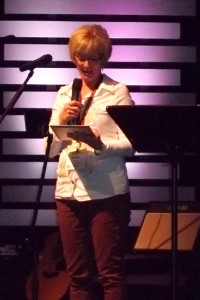 ONMB moderator Karen West: “The work we do tomorrow is birthed out of our worship tonight.”

“God moved among us as we centred ourselves on Jesus in our worship. That carried over into today’s meeting,” said West, with tears in her eyes as the convention concluded. “To God be the glory!”