Hearing impairment didn’t stop her from hearing the call 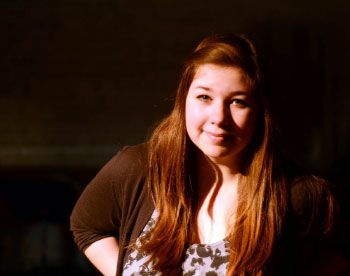 “It’s the best experience ever!” said Grade 11 student Cassie Bell near the end of her first short-term mission experience through MB Mission’s SOAR Heartland in March 2012.

Cassie may not have travelled far from her Winnipeg home, but the Eastview Community (MB) Church attender has come a long way from where she’s been.

The previous year, a contingent from her youth group participated in SOAR, but “I wasn’t ready,” says the young Christian. “Then I saw what I missed out on, how people had grown, and I really wanted to experience that.”

Cassie is familiar with the feeling of missing out: she’s deaf. Friendship was a struggle in her childhood, and she was often bullied. But as she’s grown – in years, and in her relationship with God – she’s learned to embrace who she is.

Several months before SOAR, she took a risk by sharing her testimony (via video clip) at Unleashed, a monthly youth praise and worship night. After it played, she took the stage and “signed my heart out” to Hillsong United’s song “One Way.” Her growing confidence “is why it was so important to show everybody what I can do”: worship God with all her might.

“It warms my heart that I can be different but be [like everyone else] at the same time,” she says.

This big step paved the way for participating in SOAR, which led her further along the journey of discipleship. Outside of a mission trip, “I would never have gone to Siloam Mission on my own time, wouldn’t have taken that risk – and met all these people.”

Alongside fellow Eastview youth, Cassie worked in the kitchen and on the food line at Siloam, a soup kitchen and hub of resources for people who are homeless. As she observed “people who have nothing – and they can still be happy!” and met patrons “who could still say ‘God bless you’ to those who have more,” Cassie gained a deeper understanding of gratefulness and the joy of service. The Eastview team built a strong bond of trust over the hours they spent together, and the camaraderie extended to all participants: “If you go on SOAR, you’re friends with everybody!”

Each day, SOAR teams debrief their experiences, recounting highs and lows – called “pows and wows.” Cassie’s highs and lows come from the same stretch of the road.

“I know I can have a better relationship with God, but it’s work.”

A high school student from a nonreligious family, Cassie began attending youth group at Eastview Community Church, Winnipeg, in Grade 7. On June 24, 2012, a few months after SOAR, she was baptized.