What's New
Through the conflict, life carries on in Ukraine
A FOCUS on Mission
Must Patience Be So Slow?
Harold Jantz: A Heart for the Mennonite Story
Lorlie Barkman: A Life of Creative Engagement
Last Days, First Days
Women in Ministry: Bertha Dyck
January Moment in Prayer “Holy Spirit—Fill Us!”
The Church as the Patient Body of Christ
Advent: Making Much of Jesus: Christmas Day
Home Arts & Culture Moviemaker forgoes macabre for missionary memoir

What do a horror film about the Antichrist and a documentary about a Russian-Mennonite missionary have in common? Filmmaker Mike Klassen. Being in the Way the Lord Led Me, a documentary about Highland (Calgary) member Frank Dyck, Klassen’s tireless missionary grandfather, isn’t discontinuous with his usual fare, he explains because “film is a medium to tell all kinds of stories.” 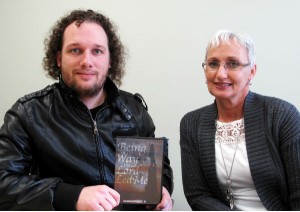 In film school, Klassen found his niche in horror because the genre offered great scope to learn through experimentation, but he’s never wanted “to be pigeonholed to one kind of story.” Raised in the MB church, Klassen says his faith – though “not as cut and dried as in the past” – is part of everything he creates.

The urging of his mother Joy Klassen and her work as producer were instrumental in his creating this 42-minute documentary on grandfather Dyck, who served in Ukraine for some 20 years.

Being in the Way is both a universal story of struggles and success, and a unique tale: “it’s one guy’s story,” says Klassen. To MB Herald obituary readers, Frank Dyck’s early life is familiar – teenage conversion and baptism in the cradle of church community, arrest and death of his father in a Ukrainian village, retreat to Germany with the Nazi army and deprivation in camps, and immigration to Canada.

“I didn’t want to concentrate on the negative [experiences of Dyck’s early life], but without context, going back [to serve in Ukraine] doesn’t mean anything,” says Klassen.

Dyck wanted to return to minister in his country of birth after college, but the Iron Curtain had sealed shut that possibility. Instead, in retirement, Dyck began a stream of short-term mission assignments, first in Germany and Lithuania with MB Mission, then in Ukraine with European Christian Mission (ECM).

Preaching and teaching in Russian and Ukrainian, Dyck encouraged local churches, supported Zaporozhye Bible College, and was instrumental in the restoration of church buildings and a seniors’ home. “I never had a notion I had any right to anything,” says the hard-working senior on the video. His sacrificial service in this difficult country was simply “being in the way, the Lord led me” (Genesis 24:27 KJV).

Klassen shot Dyck’s narrative, the church music soundtrack, bonus features (of Dyck preaching), and location stills over 10 days in and around Zaporozhye with basic equipment on Dyck’s penultimate trip to Ukraine in 2011. “I got a crazy-awesome perspective of why we are the way we are,” says the Rockway Collegiate-educated twentysomething who saw his Mennonite education come to life in Ukraine.

Though he conceived the film as a tribute to his grandfather and an heirloom for the family, Klassen never approached it as “a home video.” The quality of the film reflects his and cinematographer Nick Matthews’ training and experience.

Klassen cut through to the essence of the story to keep it a manageable length that could fit into a television hour or a Sunday school class. Seventy percent of the proceeds from sale of the DVDs will be donated to ECM for their work in Ukraine.

Much of the soundtrack was recorded spontaneously in Ukraine. Some songs are the raw singing of congregational worship Klassen caught in a local Ukrainian church. But the opening track and a bonus feature are haunting original Russian music by professional musician – and longtime translator for Frank Dyck – Olga Rubel, recorded moments before Klassen left for the airport.

The musical heritage of the extended Dyck family is also showcased on the soundtrack. Dyck’s daughter Chris Voth contributed piano numbers, and Klassen wrote and recorded the original song, “You led me.”

As the credits appear, never-before-seen archival footage rolls of Frank and his wife Nettie singing and playing “Can you Count the Stars of Evening,” recorded for Lithuanian television during their service there in the 1990s.

Just wondering, how might a person get to see this documentary? Where is it? Online?

Linda, you can find information about ordering a copy on the following website: http://beingintheway.com.