What's New
Delete or not to delete, that is the...
Believers bring water for drought baptism
Encouragement to those in the arena
Keeping attention and making an impact: A few...
Open hands to reconciliation
From the editor
Approaching truth and reconciliation with love in our...
MB Seminary offers new MA in Transformational Leadership...
Multiply August Ukraine Updates
Book Review of Return Stroke: Essays & Memoir...
Home News Lumeya appointed to DR Congo government position

Pray for first MB to serve at this level, says brother 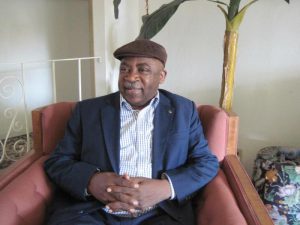 Maleghi Lumeya has recently been appointed Ministre des affaires foncières (minister of land [property[) of the Democratic Republic of Congo. Lumeya, who has served as a national congressman, is the first Mennonite Brethren to serve at this level of government in DR Congo.

“Serving in the political arena is like being a Good Samaritan,” says Lumeya, the son of a Mennonite Brethren pastor and an attorney by profession. “It’s an opportunity for the poor to see the hand of God.”

Nzash Lumeya, Maleghi’s brother who lives in Fresno, Cal., asks Mennonite Brethren around the world to pray for Maleghi as he strives to influence the decisions being made in DR Congo.

“Maleghi and his wife Lyly confess Jesus Christ as their personal Savior and Lord,” says Nzash in an email to the Christian Leader. “They belong to the Mennonite Brethren church in Congo. Humility and wisdom are much needed as they serve ‘as unto the Lord’ in our beloved country.”

In a recent phone conversation with David Wiebe, executive director of the International Community of Mennonite Brethren, Nzash explains his brother’s new assignment: Many people in Congo are homeless and even refugees because sometimes bureaucrats look the other way when business owners or thugs overtake properties. Maleghi wants to elevate the level of justice and exercise of the law to protect land owners. His job will be to administer properties, assist those who are under pressure of potentially losing their land, and to collect taxes owing on property.

Nzash reports that Maleghi wants to “help people learn to live together in the villages,” a clear reference to the difficulties in rural communities of Congo.

In an email to the Christian Leader, Nzash says, “According to Maleghi, 70 percent of conflict cases before the national Congolese courts are related to properties and deeds. Please, pray for discernment and justice.”

DR Congo is currently led by president Joseph Kabila, whose presidential term ended in 2016, but he continues to hold office. In April, Kabila appointed Bruno Tshibala, a former leading member of the main opposition coalition, as prime minister. A new transitional government, of which Maleghi Lumeya is a member, was sworn into office May 18, 2017. The new prime minister has said that holding an election in 2018 is one of his goals, along with improving the economy, living conditions and security.

Redekop, who has authored scores of articles on public policy, taught in Kinshasa in 2003, a very dangerous time for DR Congo. While in Kinshasa, Redekop found himself trapped in a home compound for a day while shooting and chaos prevailed in the streets nearby. In his lectures, which Maleghi attended, Redekop taught principles for political involvement and shared his vision for Christian involvement in politics. Redekop’s seminar inspired Maleghi to develop his own vision for political involvement.

Redekop’s ideas continue to influence leaders in the Congo. His 2006 book Politics Under God has been translated and printed in French in DR Congo. In this book, Redekop affirms politics as an appropriate arena of Christian service to the extent permitted by Christian discipleship.

Nzash points to characters from the Bible like Joseph and Daniel who played a prophetic role in government. “Congo is a place where God’s name can be made known,” he says.