What's New
Abortion, the image of God, and faithful witness...
Choosing motherhood: The sacrifice of honouring life
MWC Assembly small but full of joy
Bad back doesn’t hold back MDS volunteer
Transition in CCMBC National Faith and Life Leadership
Leading through the trauma of covid: Part three...
The church distracted: When the main thing is...
Remote wilderness rescue turns into service with MDS...
How open is your mind?
Following Jesus together across barriers
Home Life & Faithfeature articles Let’s go down to the water

Let’s go down to the water 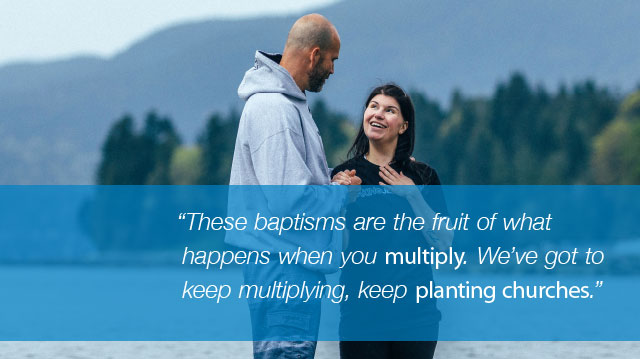 The chilly spring waters of the Pacific Ocean didn’t deter 29 people from plunging beneath the surface this Easter as a public witness to the truth and power of the gospel.

On April 20, 2014, four Mennonite Brethren churches held outdoor baptisms at locations around the Lower Mainland, turning the shores of the Pacific Ocean into holy ground.

The sister congregations – Westside Church, Westside North Shore, Christ City and Reality Vancouver – didn’t plan their events together, but were thrilled to discover the baptisms would all happen around the same time. Members of each congregation took to the beaches early Sunday afternoon following Easter worship services.

“It was four generations of one church,” said James Bonney, pastor of Westside North Shore, who baptized one new believer at North Vancouver’s scenic Deep Cove. “These baptisms are the fruit of what happens when you multiply. We’ve got to keep multiplying, keep planting churches.”

“It’s so encouraging to me,” said Norm Funk, pastor of Westside, whose congregation celebrated the baptism of 21 people at Stanley Park.

In partnership with the C2C Network, Westside has planted two churches – Reality Vancouver in 2009 and Christ City in fall 2013 – and launched its North Shore campus in 2012.

“There’s no way Westside would have reached those same people. It gets me excited for the years ahead. My hope is that in two years, eight churches will be baptizing!” said Funk.

Curious onlookers at the beach stopped to watch as baptismal candidates shared their testimonies and waded into the water to get dunked.

“When we hold our baptisms in a public place, people ask questions and see what we’re doing,” said Funk. “It’s a visible picture of the gospel.”

“I’ll do baptisms outside in any weather, in any condition, simply for the opportunity it provides to be a living testimony of a gospel-shaped life,” said pastor Kristian Martens of Reality Vancouver.

When Christ City arrived at Kits, they were surprised to discover that Reality Church was planning to baptize three people in the same location. “It was kind of funny,” said Landry. “We were 50 feet apart, cheering each other on.”

“It was a dramatic enactment of unity and Christian love,” said Martens. “We’re truly brothers and sisters in Christ, working together for the cause of the gospel and God’s glory in our cities.”

Moving into the neighbourhood

For Landry, outdoor baptisms are also a way to help his congregation realize they’re the church no matter where they go. “It’s important that the church doesn’t think it’s all about the building or the property. The church is about a people gathered.”

In fact, when Christ City renovated its 70-year-old sanctuary, donated to them when South Hill Church closed in 2013, they covered over the baptismal tank.

“We are deeply thankful for a beautiful building. But we love how we can do other stuff to be the church outside our walls. If we never get outside the building, we’re not fully embodying what the church is in our workplaces, schools, homes, playgrounds.”

For Funk, another element made the day particularly special – he had the opportunity to baptize his own son, Micah.

“It meant everything to me,” said Funk who was moved as he listened to his son share his testimony.

“Even though he’s only 11, he has a real, owned faith. But we wanted to be cautious. We wanted it to be meaningful to him – today, tomorrow, 10 years from now. So we talked about baptism. He took his time, thought about it and then made the decision. He even invited friends!”

According to the Mennonite Brethren Confession of Faith, “baptism by water is a public sign that a person has repented of sins, received forgiveness of sins, died with Christ to sin, been raised to newness of life and received the Holy Spirit.”

For many, there’s no more meaningful or symbolic time to hold a baptismal service than Resurrection Sunday.

Incorporation into the body of Christ