What's New
Through the conflict, life carries on in Ukraine
A FOCUS on Mission
Must Patience Be So Slow?
Harold Jantz: A Heart for the Mennonite Story
Lorlie Barkman: A Life of Creative Engagement
Last Days, First Days
Women in Ministry: Bertha Dyck
January Moment in Prayer “Holy Spirit—Fill Us!”
The Church as the Patient Body of Christ
Advent: Making Much of Jesus: Christmas Day
Home News Two baptisms and a new year 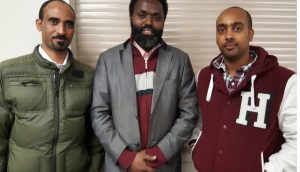 Biniam Solomon, a recent immigrant from Eritrea to Kitchener, Ont., made this announcement in December. On New Year’s Eve, Solomon was baptized, along with another young father, Habtu Tesfaszi. Both had just completed a year of discipleship training in the Eritrean and Ethiopian fellowship, Christ for All Nations, which meets at Grace MB Church.

For Solomon, the decision was not difficult. Tesfaszi, who had been baptized as a young child, at first saw no need to be baptized again, but eventually decided to be rebaptized as a believing adult – a literal Anabaptist.

The relationship between Grace MB and newcomers to Canada from Eritrea began in the summer of 2014 when volunteers from Grace went door-to-door with invitations to the church’s summer Bible camp. Two Eritrean families began coming to some Sunday services at Grace MB after their children attended camp.

The family heads, John Teklu and Robel Tesfatsion, had been praying fervently for a pastor to lead their growing group of Eritrean believers. More and more people escaping conflict in Eritrea and Sudan were finding refuge in the Kitchener-Waterloo area. Through word-of-mouth and social media, Teklu, a natural evangelist, was connecting with them.

When Tesfatsion heard his boyhood friend Yemane Gebremariam, who was pastoring fellow Eritreans in Sudan, had received clearance to come to Canada, Teklu and Tesfatsion felt their prayers had been answered.

Shortly after Gebremariam’s arrival, Teklu asked Grace MB’s (then) pastor Jim Cober to baptize his cousin. She had come to know Christ during her visit to Canada and wanted to be baptized before returning to Kenya the next day.

So, Sept. 25, 2015, on the Cobers’ deck (because a recent surgery prevented him from climbing into the baptismal tank), Cober led the informal, cooperative service with Teklu translating. Gebremariam poured the pitcher of warm water over the woman’s head as she wept tears of joy. Hallelujahs rang out, perhaps startling some of the neighbours!

After that outdoor baptism, Teklu and Tesfatsion’s fellowship asked Grace MB for space to hold services in their own language of Tigrinya. Since Oct. 18, 2015, some 25 adults and 32 children worship at Grace MB in the Eritrean and Ethiopian service every Sunday afternoon.

With encouragement and advice from Grace MB’s leaders, Christ Jesus for All Nations is in the process of registering as a charitable organization in Ontario. Current Grace MB pastor Kyle Buller has connected well with adults and youth in the group.

A great way to ring in the year

At the New Year’s Eve 2016 baptismal service, retired pastor Cober prayed a prayer of blessing on Solomon and Tesfaszi, their families and the whole Eritrean and Ethiopian fellowship.

The group shared in a meal of injera (Ethiopian bread) with traditional sauces and lasagna (added to Ethiopian cuisine during Italy’s 60-year occupation). Then they returned to the sanctuary for another time of worship, with everyone lighting candles at midnight to welcome the new year.

For many at Christ Jesus for All Nations, having experienced persecution for their faith before entering Canada, the freedom to worship Jesus openly is a huge gift. Grace MB feels blessed to walk alongside this part of God’s family.

[Doris Cober is a member of Grace MB Church, Kitchener, Ont. She is married to Jim.

Incorporation into the body of Christ

Let’s go down to the water

Rising from the waters: The celebration of baptism

One Spirit, one baptism