What's New
Through the conflict, life carries on in Ukraine
A FOCUS on Mission
Must Patience Be So Slow?
Harold Jantz: A Heart for the Mennonite Story
Lorlie Barkman: A Life of Creative Engagement
Last Days, First Days
Women in Ministry: Bertha Dyck
January Moment in Prayer “Holy Spirit—Fill Us!”
The Church as the Patient Body of Christ
Advent: Making Much of Jesus: Christmas Day
Home News One Spirit, one baptism

One Spirit, one baptism

Mennonites, Catholics and Lutherans hold second round of dialogue on baptism 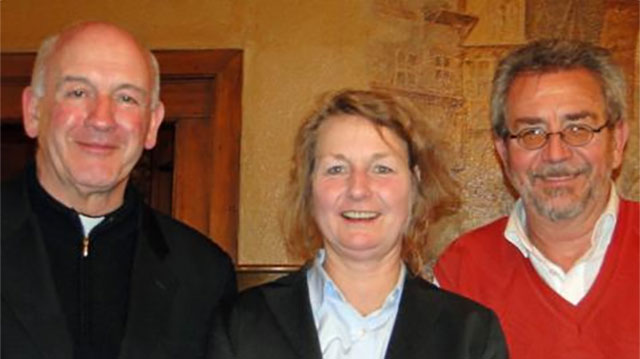 “I continue to be inspired by the mutuality of our work,” commented John Rempel of Toronto, Ontario, one of the Mennonite participants in the 26-31 January 2014 second meeting of the Trilateral (Catholic, Lutheran, Mennonite) Dialogue Commission on Baptism.

The general topic of the dialogue, which is to extend over four years, is “Baptism and Incorporation into the Body of Christ, the Church.” The theme for this year was “Baptism: God’s Grace in Christ and Human Sin”.

“Everyone is treated equally even though we are by far the smallest confession,” noted Rempel. “We are all trying to rethink the issues in terms of the 21st century, not only the 16th century.”

He commented further, “I find myself grappling especially with two aspects of this year’s meeting. I’m discovering how important sacraments are to Lutherans and Catholics as expressions of God’s initiative: God is mysteriously at work by means of prayer and water, whether we respond to it or not. And yet I can’t understand God’s initiative in the New Testament without the human response to grace.”

“At the same time our partners fear that we put so much weight on the human decision to believe that God’s initiative is pushed to the background. The participants are aware that only through the work of the Holy Spirit will this dialogue lead us closer to the mind of Christ.”

Mennonite participants who presented papers on this year’s theme were Alfred Neufeld of Paraguay and Fernando Enns of Germany. Luis Augusto Castro Quiroga of Colombia and Gregory Fairbanks of the United States and the Vatican presented papers from a Catholic perspective. And Friederike Nüssel of Germany presented a paper from a Lutheran perspective.

According to a joint release, the commission also continued to study the baptismal rites of each participating Christian tradition, with special attention in this meeting to the Lutheran tradition, particularly regarding the contextualization of baptismal rites in the African region. The commission began its working days with prayers and joint reflections on biblical texts relating to baptism.

“It is always surprising to me,” commented Fernando Enns, “how much we learn about ourselves when we are asked to explain our theological convictions to others. During this meeting the challenge was to lay out the Mennonite understanding of sin (original sin, actual sin, the free will) and salvation. We referred to biblical Scriptures, Anabaptist writings, Mennonite confessions and personal and congregational experiences. To do this in the critical presence of the other shows immediately at which points those rationalities are not as obvious as they seem to ourselves. It is a wonderful exercise in deepening the understanding of our own tradition.”

He added, “This seems to be true as well for the Lutheran and Catholic dialogue partners. Their voices are as varied as our Mennonite ones are. And every now and then we hear sentences such as ‘We should not limit God´s ability to heal and to save to our sacramental systems’. To me, this quote speaks about the cautious and humble approach to doing theology together – in ecumenical fellowship – during our encounters in this trilateral dialogue.”

The meeting was hosted by the Lutheran World Federation and took place at the Institute for Ecumenical Research in Strasbourg. The Institute also hosted a reception where commission members met with representatives of the local Catholic, Lutheran and Mennonite communities in Strasbourg.

In addition to those mentioned above, Mennonite participants included Rebecca Osiro of Kenya and Larry Miller of France. The Catholic representation included William Henn of the United States and Italy, Luis Melo of Canada, and Marie-Hélène Robert of France. The Lutheran representation included Theodor Dieter of Germany, Peter Li of Hong Kong, Kaisamari Hintikka of Finland and Switzerland, and Sarah Hinlicky-Wilson of the United States and France. Kenneth Mtata of Zimbabwe and Switzerland attended the meeting part-time as a proxy for Musa Biyela of South Africa.

The third meeting of the trilateral commission will take place in February 2015 in the Netherlands, hosted by Mennonite World Conference, and discuss the theme “Baptism: Communicating Grace and Faith”. A fourth meeting is anticipated in 2016, after which the commission is expected to submit its final report to the Lutheran World Federation, the Mennonite World Conference and the Pontifical Council for Promoting Christian Unity.