What's New
Multiply September Ukraine Updates
Volunteers in B.C. honour Leamington woman tragically killed...
Delete or not to delete, that is the...
Believers bring water for drought baptism
Encouragement to those in the arena
Keeping attention and making an impact: A few...
Open hands to reconciliation
From the editor
Approaching truth and reconciliation with love in our...
MB Seminary offers new MA in Transformational Leadership...
Home News Inner Hope becomes Reality with Bakerview’s support 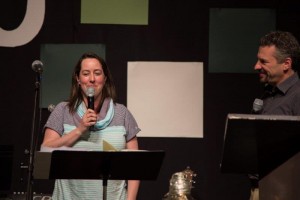 At 17, Jenny Shantz sensed a call to work with inner-city young people. Four years previously, Bakerview MB Church had embraced her family, she told celebrants at the church’s 50th anniversary weekend. That grace remained with her and became a call which her fellow members at Bakerview helped her to answer.

As a Vancouverite, she now attends Reality Church, a C2C church plant that only recently acquired a building. Inner Hope now operates with Reality as its centre. (A member of Bakerview donated $15,000 in concrete and labour to make a play area for kids behind Reality’s “new” building.)

The ministry has grown. Shantz said the group now does Sundays as a day of church – as in, all day – including not only teaching and worship, but fun activities and a chance to “hang out.”

At Bakerview’s 50th anniversary celebration, she introduced a graduate of Inner Hope’s early days: now a man with a university degree who serves as a respite worker at one of Inner Hope’s two housing facilities.

This year, as a thank offering for 50 years as a church, Bakerview members donated thousands of dollars toward Jenny’s ministry. (Donations continue to pour in at press time.) And the church has pledged to support the work for another five-year period.