What's New
6 reasons to attend the MWC Global Assembly...
One too many
Just one more
A safe place in Winnipleg
When the sent are sent away
Leading through the trauma of covid: part one...
Church of Lithuania supports Ukraine Christians
A mennonite heart for refugees
A great time for building relationships
Multiply announces new General Director
Home MB HeraldHomepage ICOMB plans sesquicentennial 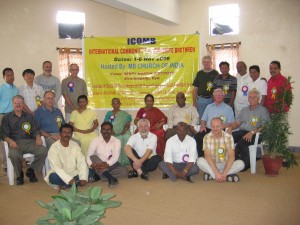 Other conferences will also be celebrating. India will kick off the year with local church celebrations in January. Japan will celebrate its 60th anniversary simultaneously with the 150th. Panama will invite original missionaries to attend their celebrations in February. Brazil plans to study the ICOMB Confession, and hold a large conference in October 2010.

Other items covered at the Hyderabad meetings were confirmation of Victor Wall as executive secretary for another 2-year term, completion of the ICOMB Confession of Faith commentary and study guide, plans for an education forum (elementary and secondary) in Congo in 2009 and a higher educational forum in 2011. There was also discussion on how to address ICOMB member conferences in crisis or conflict.

The India MB Conference hosted the group concurrently with their celebration of 50 years of independent indigenous leadership. Hyderabad is the site of the first mission effort by the then-newly minted Mennonite Brethren body in Russia. India now holds the largest MB body in the world.