What's New
A FOCUS on Mission
Must Patience Be So Slow?
Harold Jantz: A Heart for the Mennonite Story
Lorlie Barkman: A Life of Creative Engagement
Last Days, First Days
Women in Ministry: Bertha Dyck
January Moment in Prayer “Holy Spirit—Fill Us!”
The Church as the Patient Body of Christ
Advent: Making Much of Jesus: Christmas Day
Advent: Making Much of Jesus: Fourth Advent
Home Life & Faithfeature articles Humbly discerning together

Why international theological reflection is so important 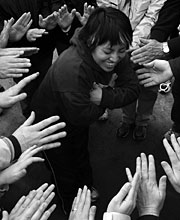 But we have to admit that others don’t share our personal convictions about the value of such theological statements. In Brazil, Arthur hears statements like: “Denominational labels are irrelevant. I join a church because I feel good there. My concern is not for confessions or doctrines. If the worship style is OK, I feel this is the place God has chosen for me.”

In the U.S., Lynn hears: “What’s the value of a confession of faith that is accepted only selectively? Where’s the structure to hold people accountable to what we claim in our confessions?”

A confession of faith is a human statement that seeks to capture the essence – the creative imagination – of the biblical text as it applies to our own context. A confession summarizes key shared convictions. It helps describe distinctive characteristics that unite the church as well as distinguish us from what all Christian believers claim.

Those of us who belong to the Mennonite Brethren church do so because we accept the inspiration of Scripture and the illumination of the Holy Spirit in our interpretation. A confession humbly recognizes that we together can discern the Spirit’s illuminating wisdom better than we can as individuals, local congregations, or even regional associations.

Confessions of faith change as the context in which we live changes. The first Mennonite Brethren confession of faith was accepted in 1902 and served both the church in Czarist Russia and the new congregations in North America. By 1975, North American Mennonite Brethren recognized that a new interpretation and emphasis were needed for a new generation. New language was used, and new forms were chosen.

The 1975 confession was disseminated to the emerging national churches around the globe that had been spawned by Mennonite Brethren missions. Most national conferences simply translated the North American confession into their national languages. Some, notably Japan, followed the lead of their founding missionaries and wrote confessions that addressed contextual issues (idol worship) and reflected particular theological influences of the founding missionaries (dispensational theology).

The U.S. and Canadian Conferences revised the North American confession of faith in 1999. Language had changed and more inclusive expression was needed. New issues had emerged, notably new medical breakthroughs affecting the beginning and end of life and religious pluralization within our own neighbourhoods. Church practices regarding the celebration of the Lord’s Supper had become more relaxed and no longer conformed to old confessional statements. 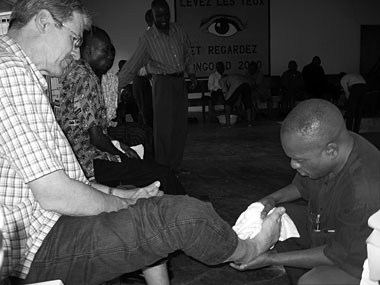 This process coincided with a conversation among global Mennonite Brethren about our shared beliefs, and in 2004 the International Community of Mennonite Brethren adopted a shared confession of faith. (See page 10.) This year a commentary and study guide on the ICOMB confession is being released in up to ten languages, with the request that congregations in all 18 national Mennonite Brethren conferences study the material sometime during a 16-month period.

We see great value in this international confession of faith.

The international confession reminds us that to discount the authoritative word of the Holy Spirit illuminating the church worldwide is a dangerous move. Just as individual believers are called to submit their own interpretative insights to a local body, so national associations of churches submit to the larger body. Authority is based less on our willingness to accept it and more on the spiritual conviction that God has called us into a single body.

Arthur Dück is director of Faculdade Fidelis in Brazil and was a member of the ICOMB Confession of Faith task force. Lynn Jost is academic dean and associate professor of Old Testament at MB Biblical Seminary, Fresno, Cal.

How it all came together

Seven of us met in Abbotsford, B.C., in 2001 at the last gathering of U.S. and Canadian Mennonite Brethren in the General Conference configuration. We missed almost every session of that convention doing something we found much more interesting: writing the new ICOMB Confession of Faith. Representing the larger language groups of the Mennonite Brethren world family – French, Telugu, Japanese, Spanish, Portuguese, German and English – we were assigned to write a confession that could be shared by the global MB family.

After the opening prayer and before introductions were complete, Takashe Manabe of Japan held up the 1999 Canadian and U.S. Confession of Faith and said, “This is a fine confession for Northern and Western believers. It is full of statements and theology. But for those of us from Asia and Africa, this confession is lacking. We express our theology in a more biblical way – through stories.” That opening statement shaped our conversations in Abbotsford and our later writing in Germany.

The International Community of Mennonite Brethren first addressed the question “What do Mennonite Brethren around the world believe?” in 1997 while meeting in Calcutta, India in conjunction with the Mennonite World Conference Assembly. In October 2001 ICOMB commissioned a seven-member confession of faith task force to write a summary of MB convictions.

The task force met in 2001 and began the process of surveying existing confessional materials and considering the primary questions which Mennonite Brethren face worldwide. The task force presented the first draft of their work to ICOMB July 29, 2002. ICOMB directed the task force to circulate the revised draft to all 18 national boards of faith and life and to conference periodicals.

The task force met in Bielefeld, Germany, in 2003 to prepare a report to the ICOMB delegates meeting later that year in Zimbabwe. Translations were completed and circulated to member conferences. Delegates meeting in Paraguay in June 2004, heard from each of the national conferences, and all of them endorsed the confession of faith as proposed.

The purpose of the common confession is to guide national conferences in formulating confessions specific to their own cultures and to define Mennonite Brethren positions for national churches that have inquired about joining the denomination.

As the ICOMB project was nearing completion, another international Mennonite body was also considering a means to express common beliefs. In 2002 in Bulawayo, Zimbabwe, Mennonite World Conference members debated the MWC Shared Convictions, a proposal that reached final form in Pasadena, Cal., in 2006. In the interim, denominational conferences were invited to comment on the proposal. Mennonite Brethren requested that the wording of the fourth conviction be revised to include the following words: “We accept the Bible as our authority for faith and life.” For us it was important to include mention of biblical authority, and the international Anabaptist church agreed.