Graffiti in the garden of Gethsemane 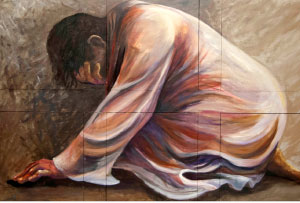 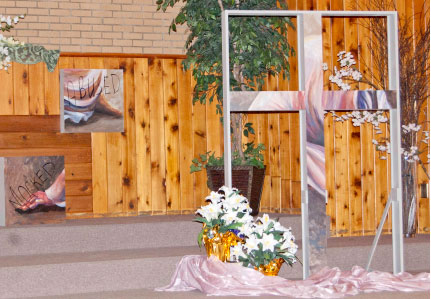 Readers retold a story of a character’s rejection of Jesus from Mark’s passion story, with the repeated refrain: “You will all fall away… for it is written: I will strike the shepherd, and the sheep will be scattered” (Mark 14:27). Going over to Carey’s painting, each reader wrote a single word – abandoned, betrayed, mocked, accused, disowned – in permanent marker, pounded the defaced canvas section from the specially constructed frame, and laid it on the stage.

The congregation murmured in distress as the marker squeaked across Jesus’ body; Carey’s six-year-old son lay down in the pew, unable to watch. “The idea of ruining something precious is offensive,” says pastor Rod Schellenberg. “Yet what else was the crucifixion but the destruction of something infinitely beautiful?”

“We know about Jesus’ physical agony, but this depiction of his social rejection…led me to recall the ways I’ve disowned or mocked him,” says Schellenberg.

When the readers reached the account of Jesus’ death, the now-empty frame was re-oriented from landscape to portrait to reveal the shape of a cross, to rippling gasps of relief and understanding. “We were engaged, drawn into the story of Jesus in a fresh way,” says Schellenberg, “because we heard and saw it differently.”

The sectioned-off frame was the brainchild and handiwork of Hepburn MB cabinet maker Warren Jeschke. “It was particularly rewarding to see the gifts of the body working together,” says Schellenberg. “An idea sparked, a vision for how to make it work, an image in an artist’s mind – creative projects have a way of unleashing people in community to fulfill their role as the ‘image’ of the Creator himself.”

“I was taken on a great journey of contemplating Jesus in Gethsemane,” Carey says, “my painting was a small sacrifice in comparison.”

“Along the Road to Freedom”: Suffering mothers model...