What's New
“I’m Sorry” : Pope Francis addresses a “deplorable...
A matter of love: Reframing abortion
“Any chance you might be expecting a goldfish?”
Abortion, the image of God, and faithful witness...
Choosing motherhood: The sacrifice of honouring life
MWC Assembly small but full of joy
Bad back doesn’t hold back MDS volunteer
Transition in CCMBC National Faith and Life Leadership
Leading through the trauma of covid: Part three...
The church distracted: When the main thing is...
Home MB Herald Gifts shared, styles clashed, work done 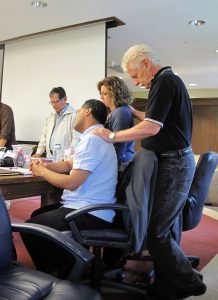 A native Kikongo-speaker led the meeting in French, interpreted into English by a native Portuguese-speaker for an audience that included native Japanese- and Telugu-speakers, relayed into Spanish by a native German-speaker. This is the multicultural reality of the International Community of Mennonite Brethren (ICOMB) annual general meeting, held June 17–21 at Canadian Mennonite University, Winnipeg.

Relational richness and shared gifts – both figurative and literal – characterized this meeting, but so did differences in decision-making and saving face. These challenges were realized as ICOMB leaders discussed appointments.

A groundswell in the room encouraged David Wiebe to consider the position of executive secretary despite his inability to satisfy the criteria of being multilingual and having a Global South perspective. (At the 2010 AGM in Germany, Wiebe agreed to serve as half-time interim executive secretary upon completion of his term as executive director of the Canadian Conference of MB Churches, December 2010.) Acknowledging the support, Wiebe said, “The bottom line is, there should be a good process.” A search committee was struck to review candidates under the executive secretary profile and description.

Through spontaneous appointments from the floor, executive officers were selected: Rudi Plett from Paraguay as chair, Yoshifumi Tanaka from Japan as vice-chair, Ed Boschman from USMB as treasurer, and Heinrich Klassen from Germany (Bund Taufgesinnter Gemeinden) as secretary. Through interpretation, the Latin American contingent of leaders affirmed that “Rudi is one of us, even though he is blond.”

Representatives of the 19 member conferences in 16 countries each reported on joys and challenges. Absent Angola and Panama representatives sent written accounts, and Indian leader John Sankara Rao’s report of his fraternal visit to the not-yet-official Thai MB conference was circulated.

Celebrating 150 Years, the story of the MB church around the world told by indigenous believers, is already available in English and Spanish through the efforts of ICOMB conferences, plans and funding for a German translation are underway, and preparations are being made for French and Telugu. Given that the accumulated membership of Angolan, Portuguese, and Brazilian MB churches is larger than the total Spanish-speaking MB community, Ray Harms-Wiebe of MB Mission suggested a Portuguese translation should also be considered. The ICOMB confession of faith is available in eight languages with translations pending in two more.

The International Community of Mennonite Brethren (ICOMB) was launched in 1990 at the Mennonite World Conference in Winnipeg to build partnership for ministry and mission between the MB conferences around the world. The second ICOMB education consultation, held in Winnipeg June 13–17, is an example of this collaboration.