What's New
Through the conflict, life carries on in Ukraine
A FOCUS on Mission
Must Patience Be So Slow?
Harold Jantz: A Heart for the Mennonite Story
Lorlie Barkman: A Life of Creative Engagement
Last Days, First Days
Women in Ministry: Bertha Dyck
January Moment in Prayer “Holy Spirit—Fill Us!”
The Church as the Patient Body of Christ
Advent: Making Much of Jesus: Christmas Day
Home News Saskatchewan convention 2013 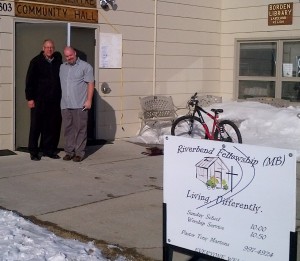 Fellowshipping around tables in Borden’s community centre (meeting place of Riverbend [MB] Fellowship) Mar. 8–9, 2013, the Saskatchewan MB (SKMB) convention feels like a family reunion – and like many such gatherings, it was not without difference of opinion as the executive presented an ambitious budget and structural changes.

An Upward Gaze was the final in a trilogy of Saskatchewan Conference of MB Churches annual convention Healthy Heartbeat themes, including An Inward Look and An Outward Focus. “The moment the focus is just on us, we become ingrown,” director of conference ministries Ralph Gliege cautioned the family: “The good news of the gospel must be shared.”

At Friday evening’s well-attended worship service, two Saskatchewan-raised members of MB Mission’s Team 58:12 to Central Asia spoke on keeping the gaze “on target” despite distractions like fear, doubt, or overconfidence. In a context where a simple communication task may require your more-linguistically-adept eight-year-old child’s intervention, it’s easy to get discouraged and wonder how to share the gospel with your neighbours, said one missionary, but when his gaze is fixed on Jesus, “the pioneer and perfecter of faith” (Hebrews 12:2), he can serve faithfully and leave the results to God.

Saskatchewan MBs passed a budget that draws down reserves and anticipates increased giving. “The reserves were built up by people’s worship,” said newly appointed director of finance and congregational services Pat Dergousoff. “This money is missionally minded; it’s a faith budget.”

Delegates expressed concern about the sustainability of the ambitious increases. “Two-thirds of churches don’t even meet the norm, why increase it?” asked Nathan McCorkindale (Philadelphia MB, Watrous).

“Are we following legalism or grace?” challenged Peter Block (Forest Grove, Saskatoon) in the face of hesitance toward the budget proposal. “If it’s grace, then there’s no problem.”

Grace Fellowship intern Clay Bitner thanked the conference for the funding which allowed pastor Murray McLellan to work full-time (“it’s huge”), and projected the church will soon be in a position to contribute instead of draw funds. “Our wallets will follow our hearts,” he said. One delegate committed to personally giving toward the Saskatchewan conference. 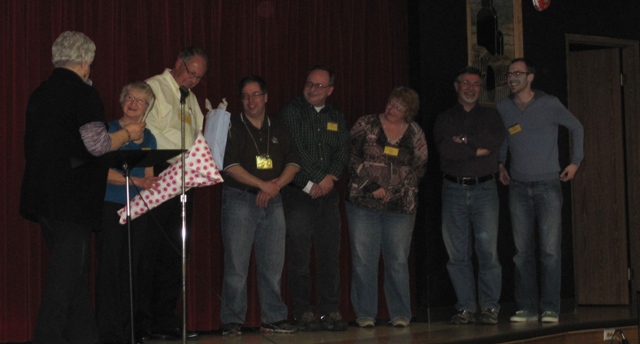 Lucille Wall, long-time servant on SKMB boards, presented a gift to Ralph and Grace Gliege who marked 20 years in the role of provincial conference minister/director of church ministries last fall. To honour Gliege who often uses acrostics and imagery to make his point, she thanked him for being a PASTOR: making Prayer the basis, giving Advice on God’s prompting, Serving, Teaching, modelling Obedience to the master, helping pastors and churches feel Restored & Refreshed.

With Gliege’s impending retirement in 2014, the executive board is planning to restructure.

Executive board advisor Tony Martens presented the proposal. An executive director would be added to the staff team and the current boards restructured into a leadership team (responsible for strategy and evaluation; chosen by and accountable to the constituency) and ministry team (responsible for tactics and activities; composed of staff and volunteers).

“This frees up the director of church ministries to be on the ground instead of attending national meetings,” said Martens.

“This adds a layer,” cautioned Hepburn pastor Rod Schellenberg. “The strength of this family has been the connection between the churches and Ralph and Dwayne [Barkman, Harvest Saskatchewan team leader]. We need to be cognizant of that.”

The 2014 convention will approve the new structure, but “I don’t want anything rubber-stamped,” said SKMB moderator Todd Hardy. “2014 will be a transition year of asking hard questions.”

Every person plays a part

Gliege and Barkman called up one person after another to speak about the work of the Saskatchewan conference.

Harvest Saskatchewan is in the process of forming a church planting board that “preserves the vision of the past and widens to include the C2C vision,” said Barkman. 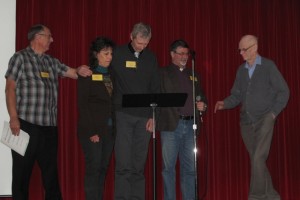 Director of church ministries Ralph Gliege, BFL representative Rick McCorkindale, and Stobbe’s father prayed blessing over Dan Stobbe who would be ordained in his church the following Sunday.

The BFL highlighted their ministry questionnaire, urging churches to administer it as part of their candidating process.

Northwest Community Church (Meadow Lake) pastor Dan Stobbe had a “coming home”: in anticipation of his Mar. 17 ordination, he gave his testimony in the very room where he graduated high school. From unexpected candidacy in Foam Lake, Sask., to Killarney, Man., to Meadow Lake, Sask., where he currently shepherds a small congregation, mentors young associate pastors, and facilitates a small group of people on the fringes of church and society, God has asked him to “be available.” 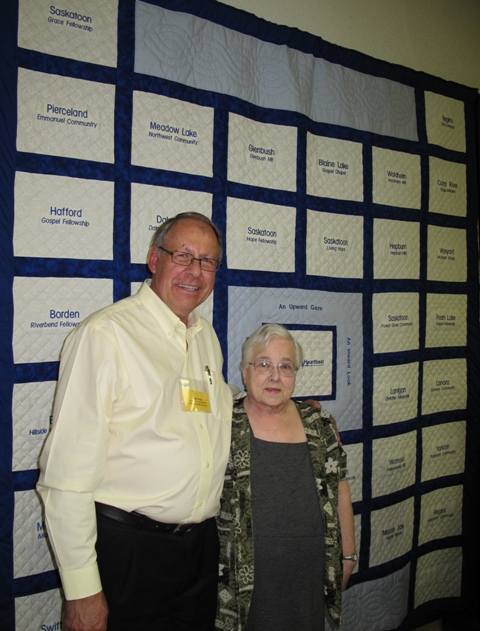 Gliege unveiled a completed quilt, representing each church of the Saskatchewan convention on a square of equal size. Quilter Adeline Sawatzky who spent thousands of hours piecing the comforter calls Gliege “brother” and was “honoured” to do the work for his encouragement.

A half-dozen from Grace Fellowship testified to the church’s role in introducing them to the life-changing good news of Jesus, and newcomer John Yoder said his family nearly missed the service on their first visit because they received such a warm welcome in the foyer.

“When you’re a church planter, you always feel you’re in way over your head,” said Allen, thanking C2C and Saskatchewan for their support – and God for unasked-for opportunities. So many Chinese-speaking new Canadians have begun attending The Compass Church, the congregation holds an EAL sermon study before the service to introduce words and concepts.

Bethany College celebrates its students. Responses to a recent alumni survey indicated that contrary to trends detailed in the EFC’s Hemorrhaging Faith report, 95 percent of Bethany graduates are currently connected to or involved in a local church. Additionally, the Volunteer Mentoring program has become normative at the college, with more than 80 percent of students engaging a mentor. Having re-evaluated and made changes in the academic program, the college is embarking upon an exhaustive two-year process of reaffirming accreditation.

West Bank director Jerry Dennill is entering his 10th summer. He highlighted completion of a new swimming pool as “a testimony to God’s goodness,” and expressed thankfulness for God’s guidance and provision. 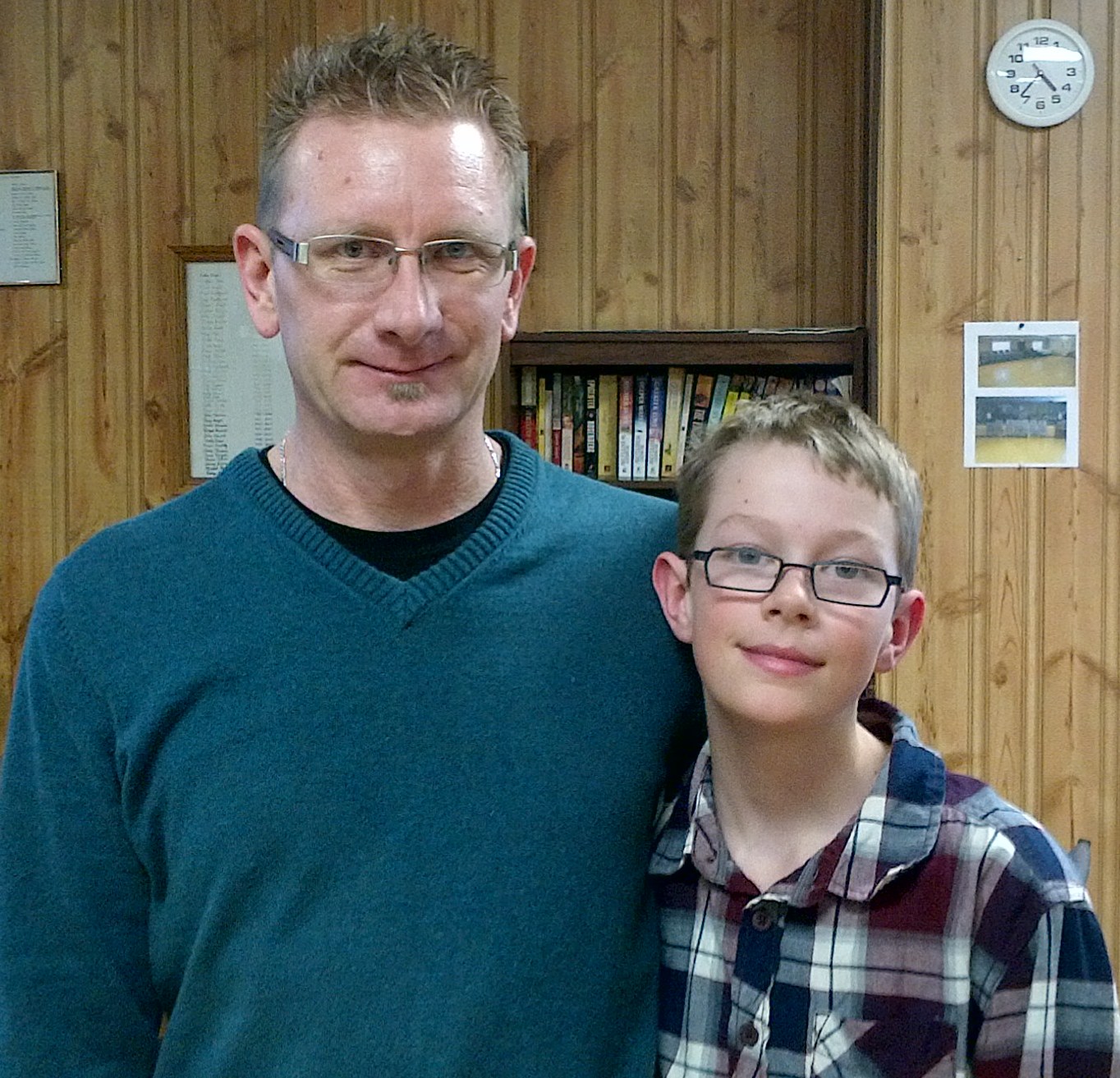 Convention didn’t just feel like family – it was, from moderator Todd Hardy working alongside his father, board of management chair Ross Hardy, to (pictured) host pastor Tony Martens whose son Zach attended his father’s every audio-visual need Friday night and Saturday.