What's New
Ask God which town
Where to from here?
CCMBC National Director attends 2022 ICOMB Summit
MCC Canada and MCC Manitoba sell shared property...
The world appears to be growing darker
Sharing a new and unified language
6 reasons to attend the MWC Global Assembly...
One too many
Just one more
A safe place in Winnipeg
Home News Connecting with SE Asian pastors a life-changing experience 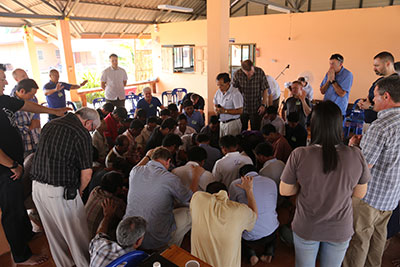 Bringing together church-planting pastors from North America and Southeast Asia has been Randy Friesen’s dream for the past year and thanks to that vision, four leaders from the U.S. Mennonite Brethren conference (USMB) are bringing renewed energy to their work.

Why pastors from Southeast Asia?

“Most of our pastors from that region are first-generation Christians who have experienced God’s power in their lives,” writes Friesen, MB Mission general director, in a recent issue of his Vision Mission newsletter. “Most are bi-vocational pastor/farmers, and many of them have been imprisoned for the gospel. They regularly lead people to Jesus through healings and prayers for freedom. Their definition of God looks a lot like that of the New Testament church. I think they have something to teach us.”

And the USMB participants agree.

“We’ve got resources, seminars, technology, systems, and all the rest to support our church planting efforts,” says Wall in an email interview. “But we have much to learn from these brothers and sisters who don’t possess what we do. The churches they plant and lead are growing and thriving.”

Morris was challenged to expect the incredible.

“Time and time again during the four days of the exchange, stories of God delivering on what appeared to be impossible were shared,” says Morris in an email interview. “So much so that I came away thinking that it’s natural to believe that God can and will accomplish the impossible to build his church. God has and will continue to perform the impossible here in America as we follow his lead in planting churches.”

“We tried to limit the distractions of our cultural and economic differences as much as possible by living together ‘Khmu style,’” says Friesen. “We slept together in a common room, ate Northern Thai food together and focused on sharing personal stories…. The power of technology, money, and education was minimized as much as possible.”

Sessions during the three full-days of the summit focused on what God is teaching the participants about faith, hope, and love. As they shared their faith stories, participants frequently referred to Romans 5:1–5, the summit’s theme text.

Pastors from Southeast Asia told of miracles and the adversity they experience because of their commitment to sharing their faith in Jesus Christ. The USMB pastors shared evidence of God’s life-transforming power in their own lives and those of people in their congregations.

Story and testimony sessions were followed by times of prayer.

“The prayer times together were powerful,” says Wall. “Despite language and culture differences, we shared a common language as we prayed together.”

One powerful prayer time occurred when participants from various cultural groups asked for forgiveness for the actions of their country or people group during World War II, the Vietnam War, and other regional conflicts.

Following this time of reconciliation and healing, the group prayed toward the nations represented by the summit participants.

“It was a powerful time of open prayer, calling God to spread the gospel in Southeast Asia, Burma, China, Japan, the Philippines, Canada, and the United States,” says Morris.

Following this Thursday afternoon session, Pastor Gowling wrote in his online journal, “It really felt like we were having an effective intercession for whole nations.”

The USMB participants agree that another meaningful experience was the hour-long foot washing ceremony during which the exchange participants washed one another’s feet.

“To watch tears well up in the eyes of these servants who had been imprisoned and tortured for their faith was humbling and moving,” says Wall. “Tears filled my own eyes as my feet were washed by these faith-filled followers of Jesus. We were experiencing life in the kingdom – the Jesus-oriented life that we often miss in our technologically saturated, fast-paced Western world.”

Morris says, “There was a sense that even though we were from countries thousands of miles apart, we were indeed very close brothers and sisters in the Lord. That (God) had called each of us into the privilege of being his ambassadors within our various contexts and cultures.

“Some of those feet were twisted from abuse. Some had sores from hard work. Some were very dirty. It didn’t matter. We were one family serving God.”

Participants say they frequently cried as they worshiped, shared and prayed together.

“Tears were a very common occurrence among everyone during the entire four days,” says Morris. “It was extremely emotional at times. Direct Holy Spirit encounters were common as people shared.”

Participating in the Missional DNA Summit was a life-changing experience, wrote Gowling in his journal. “I will never forget the men and women I have met here. Their stories of God working in them have changed my life,” he wrote.

“They are modern day heroes of faith – though they would hate it if you said that to them – but their stories are right out of the New Testament. They read their Bibles and fully expect that God will use them just like he did Paul, Timothy, Silas, Barnabas and others,” wrote Gowling. “And they fully expect that the same power of the Holy Spirit will guide them, strengthen them, encourage them, give them perseverance through the persecution and do miracles in Jesus’ name. And guess what? It’s happening!”

Wall agrees. “We may have different challenges in the West,” he says, “but these brothers and sisters possess something we need – a depth of commitment to Christ and a dependency on him that surpasses our own in so many ways.”

—Connie Faber is editor of the Christian Leader, USMB’s national magazine, where this story first appeared.