What's New
A FOCUS on Mission
Must Patience Be So Slow?
Harold Jantz: A Heart for the Mennonite Story
Lorlie Barkman: A Life of Creative Engagement
Last Days, First Days
Women in Ministry: Bertha Dyck
January Moment in Prayer “Holy Spirit—Fill Us!”
The Church as the Patient Body of Christ
Advent: Making Much of Jesus: Christmas Day
Advent: Making Much of Jesus: Fourth Advent
Home News Camp Chapel continues year-round 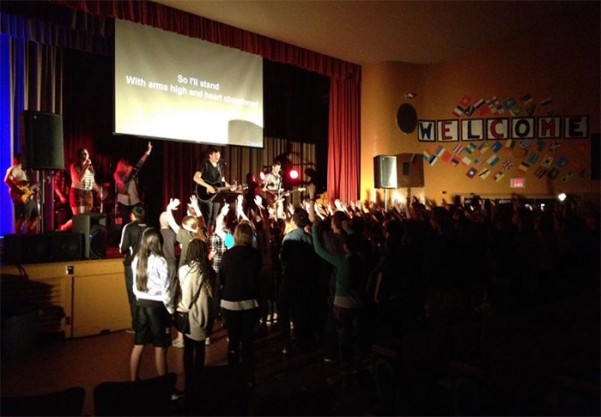 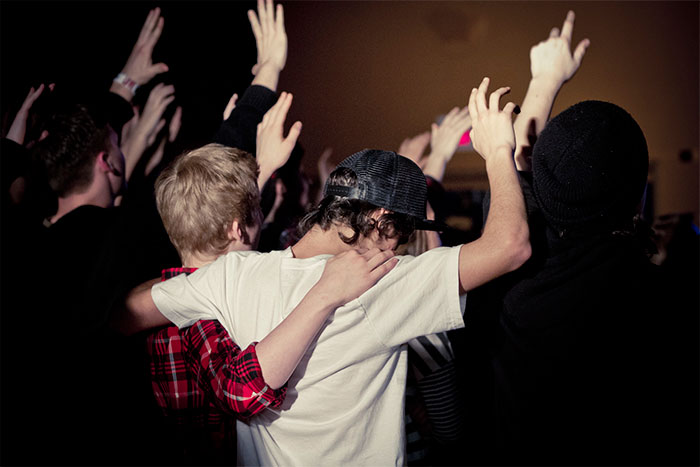 Hundreds of young people from more than a dozen churches have been flocking to a monthly worship event in South Vancouver. Named “Chapel,” the music-focused time started in South Hill MB church in 2011 with some 70 teens and young adults from Every Nation church and South Hill. Since then, attendance has grown so spectacularly that Chapel leaders had to find larger premises. They now meet in the nearby John Oliver Secondary School auditorium.

The dramatic growth, the worship style, and the succinct Bible messages are reminiscent of other youth gatherings that have sprung up in B.C.’s Fraser Valley, Winnipeg, and elsewhere. But the origin of Chapel is unique: it arose from the Christian camping experience.

Every Nation’s youth had been going on annual retreat to Anvil Island for many years. In 2011, some campers asked why the chapel worship at camp couldn’t be continued, even away from Anvil. The idea struck a chord with their leader, Jonathan Mitchell, who approached South Hill youth leader Louisa He. Her response was quick: “That is sweet!” She saw many possibilities, including a worship experience that her group of 20 youth couldn’t do on their own.

Because the two congregations met in the same building, South Hill and Every Nation youth groups had done many things together before, she said. But on this venture, Mitchell had a vision bigger than their own neighbourhood. Mitchell and He started planning, and brought four other youth pastors in as a steering committee.

Word about Chapel spread among other Anvil campers, who not only attended, but brought their friends. It seemed like no time before the size approached 200, said He, and the small South Hill building was no longer adequate. Chapel moved to “J.O.”

Mitchell says some 6–7 leaders have been bringing their youth groups on a consistent basis, making Chapel part of their calendar. Teens and young adults from some six other churches have also shown up regularly on their own.

The new season starts Sept. 27. But no one is quite sure how many will come because of the summer camp factor. In 2012, Chapel youth spread the news at camp – with significant results. This year, those same kids have been back at Anvil and other camps.

Mitchell, now youth pastor at Culloden MB, heads the Chapel program and leads the band. Each session includes a 10–15 minute, Jesus-focused message. (Mitchell says the presenter “just goes for it with the gospel.”)

Mitchell also maintains contact with youth leaders in South Vancouver to keep in step with their programs and needs. “It’s a miracle when even 10 youth leaders are willing to join something bigger,” he says.

For her part, He is excited by what God is doing through Chapel in South Vancouver. “Discipleship is happening. And the kids take the worship experience back onto the street. Because it involves people from so many churches, kids recognize each other from Chapel and can say, ‘Oh, you’re a Christian too.’”

Mitchell says, “There is a whole bunch of faith-filled kids, and some of them lead kids to Christ. They see passion for the first time. Chapel shows kids they are part of something bigger.

“God is creating a network of excited kids.”

I am the youth pastor at Ebenezer Baptist 53rd and fraser. Our group was involved with chapel most of last year. I just want to say that Chapel is fantastic. It isn’t so much the specific things that are done as it is the spirit of unity that has been there. I had a moment this summer where I felt like the youth groups in this neighbourhood, south fraser street, could become almost like one extended family. Chapel has been a large part of that.