When pastor Mike Nishi got the call from a couple in his church whose marriage was hurting it was both an answer to prayer and a moment of apprehension. The pastor of South Hill (MB) Church in Vancouver had heard that something was amiss – including the possibility of abuse – and had been praying that they would contact him.

Their call was the beginning of a challenging, still ongoing process, but with the help of resources from Mennonite Central Committee (MCC), it has been a mostly positive experience. 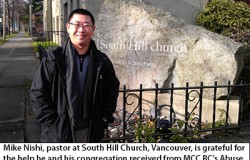 Together with the church elder board, Nishi worked to address the situation. Remembering the abuse prevention materials MCC sends out to all its constituency churches, he contacted MCC BC for further help.

“Elsie (Goerzen, Abuse Response and Prevention program coordinator) went above and beyond,” Nishi says. “She helped me with further resources, including measuring tools that helped us ensure that we were really dealing with abuse, so we could name it.”

The church began a process of prayer and reading through resources provided by MCC BC that helped them think through where they stood biblically and socially on issues like separation and abuse. Goerzen acted as an objective person to help them review their documents, giving suggestions and encouragement. They were able to write several letters to the couple, outlining their position as a church and offering their help.

“The process gave us confidence that we could do this,” Nishi says. “I wanted us to do this as best as we possibly could. We wanted to help this woman and this man using a balanced approach. I really believe that this is about reconciliation.”

As the couple met with the pastor, it became clear there was a great deal of work to be done. The couple is now separated, going through individual counselling, with the hope to eventually reconcile.

MCC BC provided Nishi with referrals to counsellors and support groups for the couple, saving him the time and the effort of researching it himself. One resource the man accessed is a support group called Men’s Work – Building Healthy Relationships.

Nishi recently attended a conference on pastoral care and biblical perspectives, sponsored in part by MCC. The conference opened his eyes to the prevalence of abuse in relationships in the church context.

“Domestic abuse is a silent subject in our churches; we don’t know how prevalent it is,” he says. “It was so helpful to hear the stories, see the resources out there, and realize I’m not alone. I pray for my congregation in a different way now.”

For the couple in his congregation, the story is still ongoing. Nishi is committed to seeing it through.

“I want to thank MCC for its vision in putting this program together,” he says. “Without that, I would be telling a different story today.”

Building Healthy Relationships is a men’s group is beginning in January 2013. MCC’s annual training for pastors, Understanding Abuse in Relationships takes place in March 2013. For more information on these opportunities and about MCC BC’s Abuse Response and Prevention program visit bc.mcc.org/whatwedo/endabuse or contact Elsie Goerzen at endabuse@mccbc.com.