What's New
A FOCUS on Mission
Must Patience Be So Slow?
Harold Jantz: A Heart for the Mennonite Story
Lorlie Barkman: A Life of Creative Engagement
Last Days, First Days
Women in Ministry: Bertha Dyck
January Moment in Prayer “Holy Spirit—Fill Us!”
The Church as the Patient Body of Christ
Advent: Making Much of Jesus: Christmas Day
Advent: Making Much of Jesus: Fourth Advent
Home Life & Faithfeature articles Beyond ourselves leadership 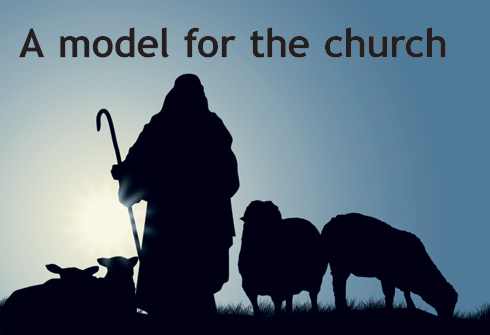 Some of the world’s greatest leaders, despite their amazing power to bring about change, are actually humble servants to a cause. We might think of Mother Teresa, or Greg Mortenson, whose mission is to promote peace one school at a time in Pakistan. Who or what do these leaders serve? These exemplars look past their own needs and desires, and serve others with a greater cause in mind.

I call this beyond ourselves leadership – a way of leading that is not rooted in self-interest. It’s a way of leading that is an expression of service. The focus of the service is to an ideal that inspires many people to commit and sacrifice for the betterment of others. This type of leadership incarnates a larger cause and looks toward the transformation of environments in order to enrich others.

When Christians think of beyond ourselves leadership, who or what do we imagine serving? Yes, we serve people (Mark 10:44); but our primary service is to the Lord and his gospel. From that foundation, service to people is inherent. Loving and serving others can’t be separated from loving and serving God. As Paul says in Ephesians 3:7, “I became a servant of this gospel by the gift of God’s grace given me through the working of his power.”

Sometimes servant leadership can degenerate into merely pleasing people, and be misinterpreted as authentic service. We appear as servants, but actually demonstrate a lack of leadership and God-pleasing service. When Paul dealt with people who were perverting the gospel, he made this statement: “Am I trying to please people? If I were still trying to please people, I would not be a servant of Christ” (Galatians 1:10). In other words, if our ultimate service is to people rather than Christ, Christ will not be the master. Service to Christ is not to be equated with pleasing people.

Beyond ourselves Christian leadership is an interactive process among individuals that moves a group closer toward a goal or cause, in order to ultimately serve Jesus Christ. When Jesus was on earth, he followed the will of the Father and asked others to follow him (John 4:34; Matthew 4:19; 9:9). Jesus was a leader who incarnated and articulated the will or cause of God, and then empowered the disciples with the Holy Spirit to complete what he had started (Acts 1:1,2). Christian leadership follows and serves the same cause that Christ has given the church (Colossians 1:24,25).

The ultimate cause of Christian leaders

In Scripture, an excellent example of beyond ourselves leadership can be found in Paul’s speech to the Ephesian elders (Acts 20:17–35). Paul served the will and cause of the Lord and, as a result, faced persecution, imprisonment, and much hardship. As part of his service, Paul preached a kingdom cause and proclaimed the whole will of God to the church. He also provided for his own needs and those of his companions.

Throughout this passage, we note that Paul’s main concern was to finish the race and complete the task the Lord Jesus had given him – to testify to the gospel of God’s grace. Paul was willing to give his life for the cause.

We also note how Paul told the elders that, after three years of instruction, they now needed to assume the watchcare of themselves and the flock. Paul called the Ephesian leaders to see beyond themselves. They were to continue in the whole purpose of God and not allow those who might distort the cause with inauthentic or self-serving leadership to flourish in their midst. Such leaders weren’t led by something beyond themselves; they wanted people to follow their twisted truth, and to build their own kingdoms for personal gain.

Christian leadership means serving a cause that’s beyond ourselves, providing an example for others to follow, articulating the cause in an inspiring way, and assisting others to serve that cause – the gospel of Jesus Christ and his glory. In this way, we follow the example of Paul, who was “a servant of Christ Jesus, called to be an apostle and set apart for the gospel of God” (Romans 1:1).

As a person articulates and acts in a fashion aligned and attuned to this eternal cause, inviting others to follow, that servant becomes a leader. As leaders dialogue about more effective ways to fulfill the cause, and as others identify and serve that cause, leadership occurs.

Shaping our service of the cause

As leaders serve with a cause, they will then be able to determine what service to people means. Acts 6:1–6 is a prime example. The church is confronted with the problem of certain people being overlooked in the daily distribution of food – a situation that certainly provides an opportunity for service. The apostles, however, say it wouldn’t be right for them to “neglect the ministry of the word of God in order to wait on tables.” In other words, their cause was to serve Christ through the teaching of the word of God and prayer. Serving the cause cautioned their involvement in food distribution.

But isn’t servant leadership all about serving people? Yes, but we first need to be clear about the cause. Then we can determine our role and decide how we will serve others. In Acts 6, the people’s physical needs could and would be met by others, if so arranged. The apostles determined to focus on what they were called to do in service to the Lord – a ministry of the word and prayer.

If we diverge from what God calls us to do, we’re not serving Christ – or people – the way we should. If the apostles had said, “What a need! We must drop everything and attend to this matter,” they wouldn’t have completed the service, nor the leadership, for which they were uniquely equipped and called. They provided guidance to deal with the matter, but the solution didn’t rest directly in their personal schedule.

Authentic service to a cause requires courage to articulate that cause, despite what others might think. That’s why this type of leadership is beyond ourselves. It doesn’t serve self-interest, it doesn’t serve small group interest; it serves a cause and has the right to call leaders and followers to account.

Implications for the church

What does a certain church leader do that no one else in the church does? That’s what the leader should spend his or her time on. The “yes” for the apostles in Acts 6 was the ministry of the word and prayer. The “no” was serving at tables. For others, the “yes” will be serving at tables. When we think of true servant leadership, we need to ask, “What area of service should be my primary focus in order to fulfill my leadership calling within the cause of the gospel?”

This perspective means a church leader’s service can be evaluated by a job description. If the pastor isn’t capable of fulfilling this mandate, he or she isn’t really serving the congregation. When the obligations of the vision don’t fit a person’s giftedness, nor is there willingness to adapt, the pastor should practice integrity and move on to a more suitable environment.

A word about power & authority

I’ve talked about service to a cause as the main element of leadership, but what about power? Isn’t there power in leadership positions? Yes, there is. And if one is blind to its various manifestations, there will be increasing difficulty with leaders. If we focus on service to a cause, we can also determine when power is being abused.

When power – the ability to get something done – is used in a way consistent with the cause, the power is legitimate. When power is used for self-enhancement or control, it’s illegitimate.

Again, leaders and followers are accountable to the cause. When leaders are above critique from other sincere Christians, or they claim immunity from further dialogue, we need to question their use of power.

The authority of a leader doesn’t come from a person’s position, but from their service to the cause. Their example and service have built-in authority to which others will respond. As Paul said, “Follow my example, as I follow the example of Christ” (1 Corinthians 11:1). May we each serve Christ and his body in conformity to his lordship and the cause of the gospel.

Doug Berg is associate professor of leadership studies and associate dean of administration with MBBS-ACTS in Langley, B.C.

Forging ahead on mission