What's New
Multiply September Ukraine Updates
Volunteers in B.C. honour Leamington woman tragically killed...
Delete or not to delete, that is the...
Believers bring water for drought baptism
Encouragement to those in the arena
Keeping attention and making an impact: A few...
Open hands to reconciliation
From the editor
Approaching truth and reconciliation with love in our...
MB Seminary offers new MA in Transformational Leadership...
Home Life & Faithfeature articles The Baby and the Dragon

The Baby and the Dragon 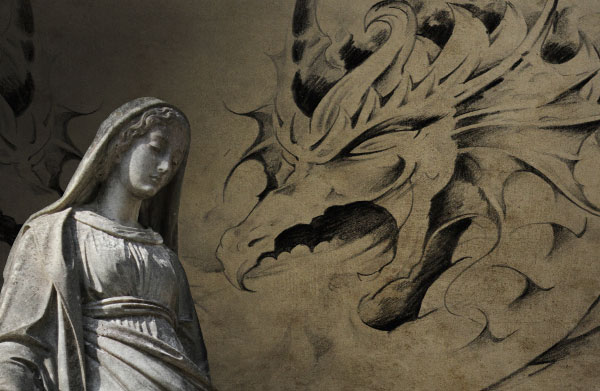 Glorious angels, wise guys, starry skies and shepherds gathered around the manger: the picture of Christmas? I’ve got major issues with how we illustrate the Christmas story because it’s only part of the story.

I didn’t realize how selective my own reading of the Nativity story was until I heard a guest speaker in Bible college share his experience of celebrating Christmas among Christians in Ethiopia. What struck him was the part of the story that they emphasized: the escape to Egypt (Matthew 2:13–23).

As this speaker opened his Bible to Matthew 2 and read us the whole Christmas story, it forever changed the way I read the Christmas story. I could no longer be content with any short-sheeted version.

Philip Yancey is right. “We observe a mellow, domesticated holiday,” he wrote, in The Jesus I Never Knew. “Above all, we purge from it any reminder of how the story that began at Bethlehem turned out at Calvary.”

Yes, a less selective reading of the Christmas story reveals a far less cozy story than our Christmas cards do. The Bible registers ominous tremors of what lies beyond the manger.

“Conspiracy” beyond the manger

In the Gospel of Luke, we find Joseph and Mary taking baby Jesus to the temple to be dedicated to the Lord, in keeping with Jewish custom. What happens there, however, is not routine.

An old and devout man by the name of Simeon embraces their child as the promised Messiah, then makes a rather revolutionary and incredibly subversive prediction: “This child is destined to cause the falling and rising of many in Israel, and to be a sign that will be spoken against, so that the thoughts of many hearts will be revealed. And [to Mary] a sword will pierce your own soul too” (Luke 2:34–35).

Although Simeon will not live to see it, somehow he senses that in the Christ child a new force has arrived to challenge and overthrow the world’s powers. In this revolutionary vein, Mary too sings about God bringing “down rulers from their thrones” (Luke 1:52). Now, she gets a deeper sense of the personal cost involved in God establishing his kingdom in and through her son.

And in Matthew 2, following the visit of the magi, Jesus’ young life comes under threat from an increasingly paranoid King Herod who was infamous for killing off anyone suspected of undermining his authority. (He killed two brothers-in-law, his own wife Mariamne and two of his own sons.)

I have never seen a Christmas pageant or greeting card depict the story of the state-sponsored massacre that happened in Bethlehem after the shepherds and magi left, yet it too is part of the real Christmas story. My brothers and sisters in places like Ethiopia rightly remind us that Jesus was a refugee who came to establish his kingdom for contemporary refugees too.

Through Simeon’s prophecy and Herod’s murderous plot, we see the cross already casting its dark shadow over the Christ child.

This brief look at two neglected parts of the Christmas story helps prepare us for the version we find in the book of Revelation.

No one acquainted with the Gospels can read this story of a woman, male child and dragon in Revelation 12 without thinking of Mary, the Christ child and their divine deliverance from the evil schemes of Herod the Great.

What John gives us here is the Christmas story told in a different literary genre, known as “apocalyptic” literature. The Greek word apocalypsis (translated as “revelation” in Revelation 1:1) means unveiling.

What John does in the book of Revelation is cast a drama that allows the reader to see deeper/divine realities in the present. This isn’t science fiction or even historical fiction but reality, past, present and future, from the divine perspective. John helps us see what an unveiled version of the Christmas story looks like.

John’s vision includes scenes from the manger and beyond – both backward and forward in time. This cosmic drama synthesizes many Old Testament and New Testament images and events, all expressing divine reality.

The characters in this story are composites. Take the woman:

The dragon’s composite character is spelled out in verse 9 (cf. John’s further commentary on the seven heads in 17:9). But there are also allusions of popular Greek mythologies, like the story of the birth of Apollo, which also involves a dragon, jealous king and royal offspring.

In the manner of his time, John tells the true story of Jesus in the context of stories familiar for his audience. Today, we face similar but different challenges in relating the good news. What is real in a world filled with so much propaganda and virtual reality?

In the central features of John’s Spirit-enabled vision, the birth-giving woman and the death-dealing dragon are, as Eugene Peterson notes, “the light-year limits of the best and worst we can imagine.” What John sees by the Spirit is actually more real and more substantial and solid than what he and we ever see with only our physical eyes.

The moment the child appears, the dragon lunges. Some of us instinctively shut our eyes to avoid witnessing the atrocity. But horrified gasps give way to sighs of relief as the infant is snatched away to safety while the woman escapes to a secure place of sustenance prepared for her by God.

In the split-second interval between birth and rescue, as the dragon is robbed of his prey, we recognize this child by means of John’s description in v. 5: “a male child, who will rule all the nations with an iron scepter.” This is the promised deliverer, the coming king, the prophesied messianic hero of Psalm 2.

Simeon’s revolutionary prophecy and Herod’s conspiracy theory were right; in Christ a new force has arrived to challenge and overthrow the world’s powers.

The immediate reaction to the birth of this child is not sipping hot chocolate and singing Christmas carols, but rather waging – and winning – a war, first in heaven (v. 7–12) and then on earth (v. 13–17). Michael, the captain of the angels, joins battle with the dragon and his demonic horde. Back and forth across the skies the contest rages and then, as suddenly as it began, it is over.

The dragon and his hosts, no match for Michael and his angels, are tossed (eblethe = bounced) out of heaven and down to earth like a pile of dirty laundry.

The vision of Isaiah 14 unfolds before us: “How you have fallen from heaven, morning star, son of the dawn! You have been cast down to the earth…” Now, we read with greater insight and awe Jesus’ words to his disciples in Luke 10:18: “I saw Satan fall like lightning from heaven.”

This may not be the Christmas you or I grew up hearing, but it has the key features of the nativity story all the same – especially for the persecuted church in John’s day.

They understood that Jesus’ arrival awakened more than wonder and holy awe. It also aroused the forces of the evil one and his allies: accomplices like Pharaoh in the Old Testament and Herod in the New Testament, who were as intoxicated with power and oppression as the dragon.

But despite the apparent power advantage of a dragon over a pregnant woman, or of Pharaoh over an infant like Moses, or King Herod over the Christ child, the power advantage is only virtual, not real. The dragon is a defeated foe. God is still “on the throne” (a dominant image in Revelation).

The cruel tyranny the forces of evil are willing to unleash to maintain their illusion of power and control merely unmasks the depths of their desperation and the utter certainty of their defeat (v. 12).

This is no comeback surge; the foe acts like a sore loser who is so hopelessly behind in the game with only minutes on the clock that he simply tries to inflict as much damage as he can before tasting the humiliation of defeat.

Satan’s desperate actions and ultimate defeat are explored further in the chapters that follow. What is important to remember here and now is how the defeat took place: “by the blood of the Lamb and by the word of their testimony” (v. 11).

It is not through strength or force that followers of Christ triumph over the dragon and his hordes on earth, but through sacrifice and witness. The picture of the dragon (the personification of evil) being cast out of heaven is a heavenly portrayal of the earthly battle that took place when Jesus Christ “disarmed the powers and authorities [and] made a public spectacle of them, triumphing over them by the cross” (Colossians 2:15).

Victory comes through the Lamb’s sacrifice for us which John underlined for us back in Revelation 5.

It is John’s Spirit-appointed task to supplement the work of Matthew and Luke so that the Christmas story “cannot be sentimentalized into coziness, nor domesticated into drabness, nor commercialized into worldliness,” writes Eugene Peterson. Revelation 12 unmasks the propaganda of John’s age and ours. Peterson describes it as “adrenaline to us of little faith…[so] that we are fortified against intimidation.”

We need John’s version of the Christmas story to remind ourselves that so much of what we see around us, especially at Christmas, is synthetic.

Our faith must be strengthened against the propaganda that implies everyone must be jolly, families will love each other, and silver-haired grandparents will be welcomed with open arms by their beautiful and successful sons and daughters (together with the right number of boys and girls), all bursting with smiles. Absent are the images of family get-togethers in which the family doesn’t actually want to get together. Absent too are the marriage breakdowns and suicide attempts which often peak during this time of year.

The bad news is that “the great dragon…that ancient serpent called the devil, or Satan” (v. 9) does not take a holiday break. But the good news – the greater news – is that neither does our Saviour! The one who confronted the forces of evil in the cradle and overcame them at the cross is alive and well.

So as you have opportunity to “show and tell” the Christmas story this season, think of ways to tell more of the story that most people are used to hearing.

If you’re artistic, maybe you can design a Christmas card that includes Jesus as a refugee. If you add an image of a defeated dragon, I guarantee it will provoke discussion. A manger scene that lies in the shadow of the cross is more subtle but also effective.

Just do something that helps unwrap more of the Christmas story…because now we know the rest of the story, and it has a great finish!

Advent, an invitation to wait