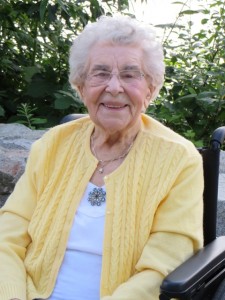 Anna Koop is content that God knows what he has planned for her. After all, she has witnessed God’s faithfulness for 100 years.

Anna Koop’s story is not uncommon among women of her age, but no less remarkable for it – especially as she reaches the century mark. King Road MB Church, Abbotsford, B.C., where she is a charter member, celebrated her June 4, 2014, birthday the following Sunday with cake and a card between their morning services.

Born into a tight-knit Mennonite community in Ukraine, Anna was baptized at 18 according to community traditions, but it wasn’t till adulthood that she made a significant personal decision to trust Christ.

In 1942, she and her husband Franz Harder heard a new message at church, about being born again and cleansed of sins. Feeding the pigs one evening, she fell to her knees, saying, Lord, have mercy on me a sinner.

“I can’t remember exactly what I all prayed,” she writes in her personal memoirs, but she remembers those first words. “It was such a wonderful feeling to pray to God so freely. The sky was full of stars.”

Shortly after, Anna and her husband were baptized in the Dnieper River in the village of Einlage.

Then the war came to the village. Fleeing with her mother and sisters as the men began to be taken, Anna, Franz and their three children settled briefly in Poland. When trouble came again, they fled to Czechoslovakia with their fourth child only three weeks-old. Shortly after, Franz took ill and died.

Escaping turmoil again, Anna was embraced by a family in Germany before immigrated to Canada, where she settled in Abbotsford. She married Rudolf Koop, a Mennonite man who had experienced similar trauma and displacement in Europe. Their blended family consisted of 9 children.

“She’s a courageous lady, a goer,” says her daughter Helen Cowie. Despite all the hardships Anna endured – losing family members, fleeing her home and being displaced for years, and starting from scratch in a new country – “she doesn’t get discouraged. She accepts what the Lord puts in her way.”

Cowie calls her mother a woman of tremendous faith. Anna is eager to share testimonies of God’s provision faith to encourage others and she’s quick to quote a tremendous number of Bible verses.

Anna wanted to see one of her children become a missionary; her faith was rewarded and tested as Cowie, her second-youngest daughter, then a single woman, left to be a missionary in Benin, West Africa. 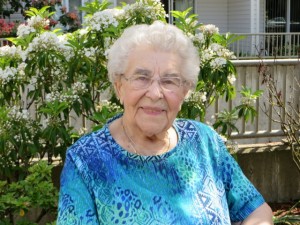 Like many women of her day, Anna Koop is a hard worker. When she and her husband visited Helen in Benin, Anna was busy cooking and experiencing new things. “She wasn’t scared,” says Helen. “She just got on that plane to Africa.”

Cowie remembers how her parents would pray and read the Bible together every night. Anna continues to pray for her children, 76 grandchildren, 56 great-grandchildren, and 8 great-great-grandchildren. People at the care home where she lives now “have been so encouraged by Mom’s prayers for them,” says Cowie. “Somehow, Mom always knows what to pray and precisely at what time someone is in need of prayer.”